The Art (and Science) of Following Your Gaming Passion

There are so many reasons why we love video games. The hows, whens, and whys behind gamer enthusiasm can be as varied as the games themselves. And while the thrill of gaming as pure entertainment cannot be overstated, one must also appreciate that playing games can offer community and comfort during extremely difficult times.

Rosemary “Nekkra” Kelley was introduced to video games early on (she has a brother six years her senior who got her hooked), but it wasn’t until much later that video games would essentially alter her dreams for herself. Shortly after graduating college with a degree in environmental science, Kelley’s life would be tragically turned upside down — and in that pivotal moment, video games provided solace, escape, and a whole new direction for her life and career.

“The game plan was always to go into academia,” says Kelley, who was presented with an opportunity to pursue a PhD right after graduation. “But I lost both my parents very shortly after I finished college, and it made me reevaluate what was going to make me happy in life.” 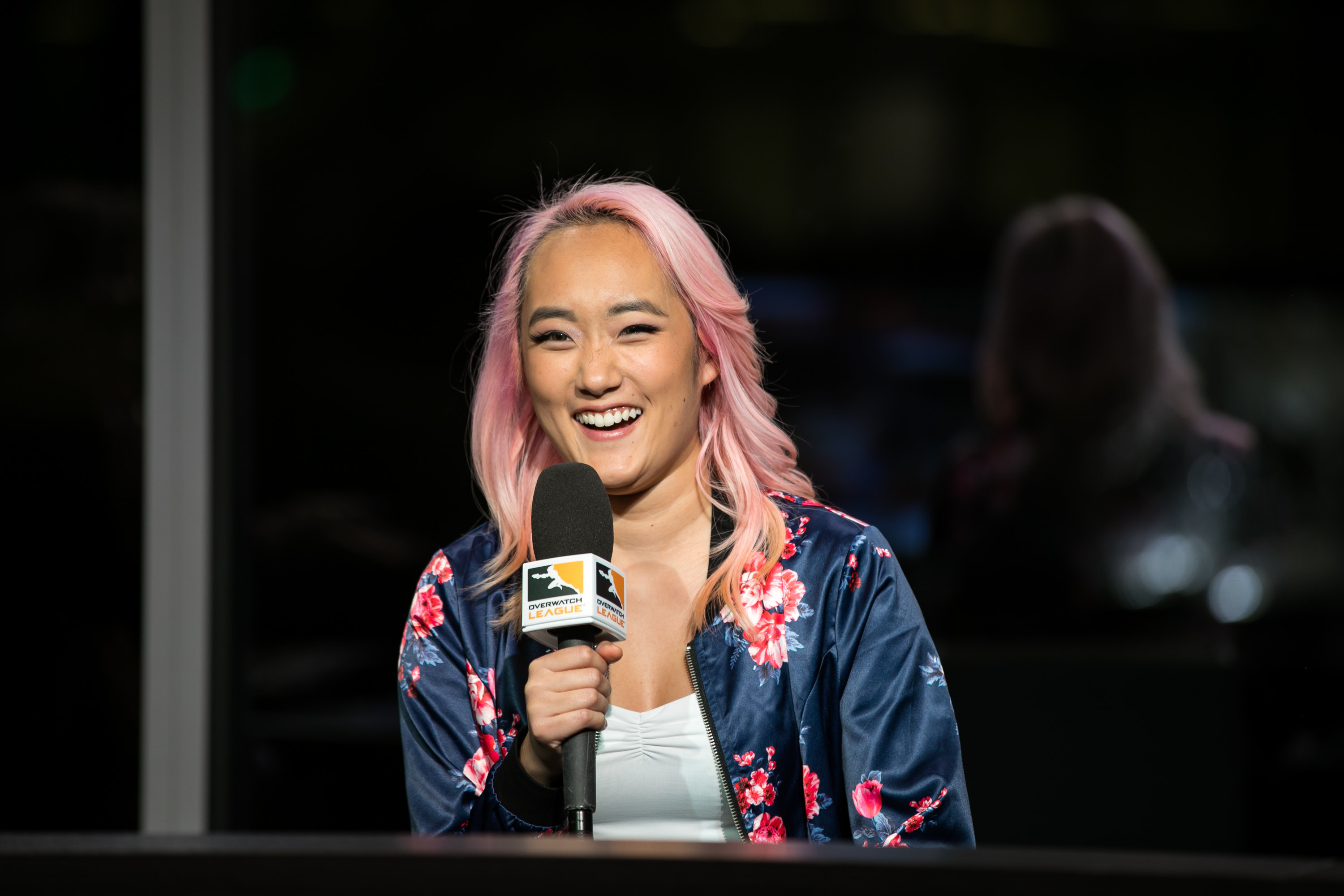 Kelley’s journey to establishing herself as a streaming star and then using her expertise to analyze and illuminate the esports experience as  Overwatch League color commentator is all about finding one’s voice, the power of video games as a coping mechanism, and the strength of supportive and engaged communities.

Video games have always been a happy place for Kelley for as long as she can remember. Her older brother set her up in front of a Nintendo 64, and family games of Mario Kart eventually led to her getting her very own Game Boy Advance and a new obsession in the form of Pokémon Crystal.

“I always enjoyed the storytelling and the adventure of games,” says Kelley. “But then I also found the more competitive side in college when I was introduced to Hearthstone and Overwatch.” 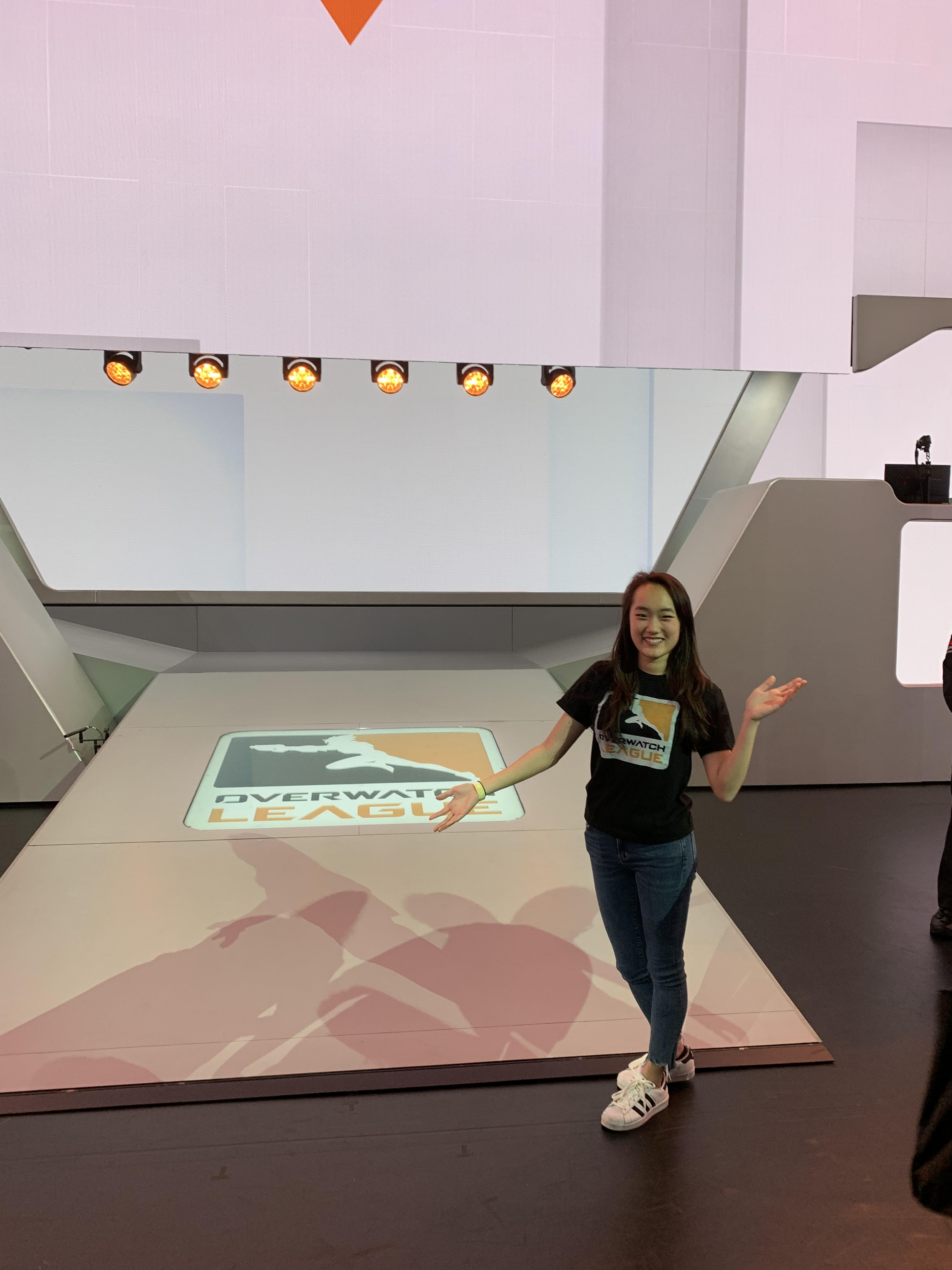 Rosemary representing the Overwatch League during an event in Burbank, CA

At this point, games were still just something she did for fun, while working toward a career in science. In fact, she figured she’d had her whole life mapped out.  “Like, I’m going to college, and then every summer I’ll look for some type of research fellowship or internship; then I’ll get a publication or some research out of that, and then I’ll use that to get my master’s or a PhD, then teach… It all felt very goalposted,” says Kelley. 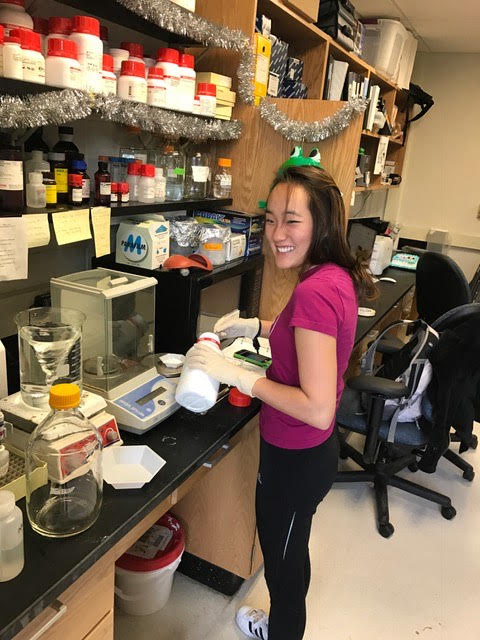 In the lab, back when a career in science seemed like her destined path

With her life plan suddenly derailed shortly after graduation, Kelley sought out the comfort and solace of the games she loved. “It’s the reason I feel so attached to video games. I was drawn to them because I felt like I could use video games as a positive escape from the emotions I had, following that loss. And I’m so grateful for that.” She also understands that she’s not alone in feeling that way and is a strong advocate for the mental health benefits of gaming. “I like the idea that there might be someone out there who’s like, OK, she got through this and maybe I can, too.”

Although Kelley had been dabbling in competitive gaming, the concept of “esports” was still nebulous to her, until a visit to BlizzCon in 2018 cemented her resolve to chart a new path for herself.

“I saw esports on the big stage for the first time there, and it was such a unique experience, just seeing the production and the fans cheering — even hearing it being referred to as ‘esports’ was completely eye-opening,” says Kelley. 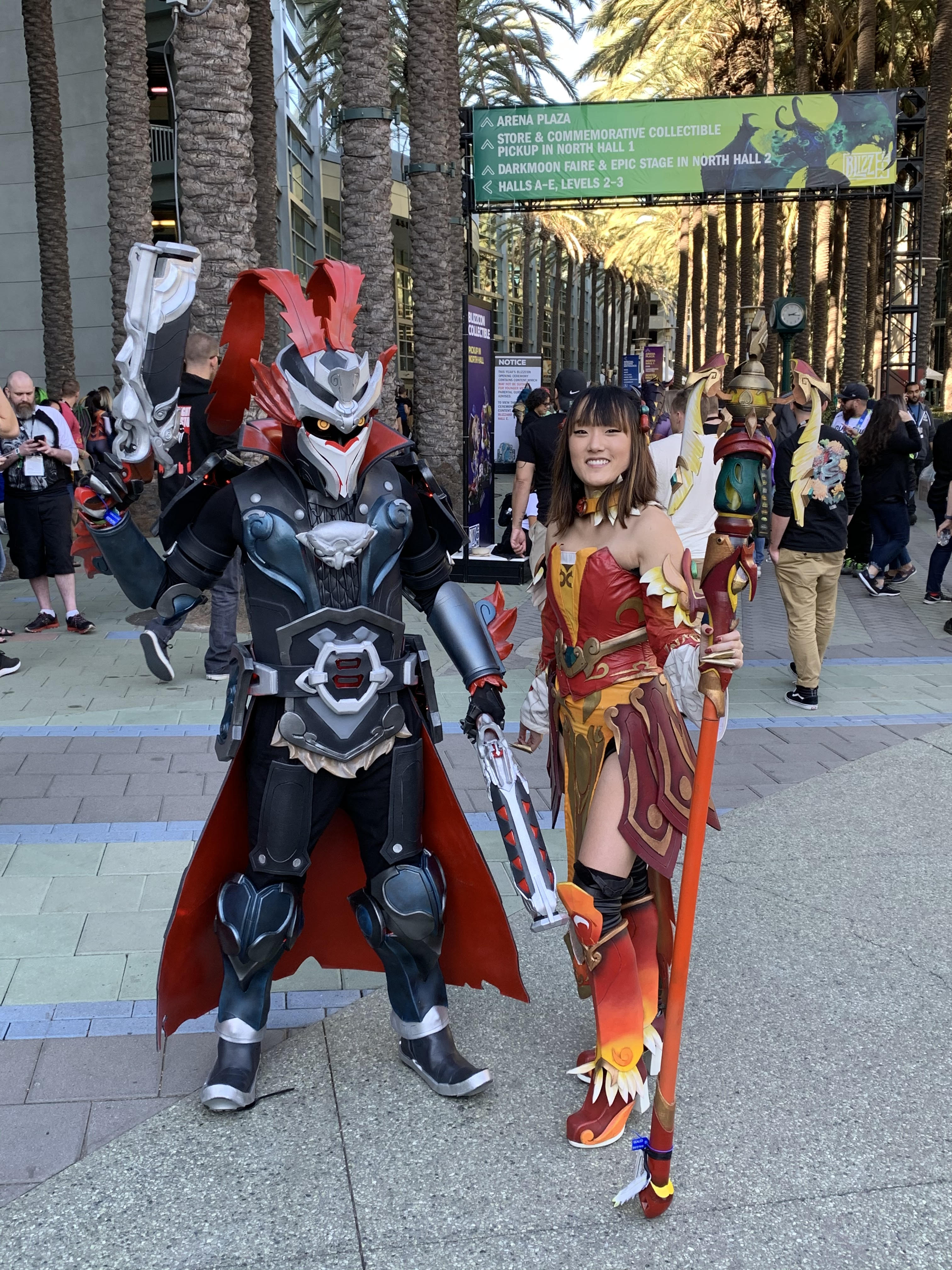 Cosplaying as Overwatch’s Mercy at BlizzCon 2019

Inspired, Kelley began researching ways to get involved in esports more directly, and after trying to do social media management and community management, she soon decided to put together her own camera setup. “And, eventually, it was being in front of the camera that stuck.”  Even more surprising was just how much her original passion — science — would come into play in helping her feel comfortable in the spotlight.

“I do often think about how the experiences I had in STEM actually prepared me for a job like this,” says Kelley. “I had to give presentations about my research, and there’s a bit of storytelling in that, while also looking at data analysis. I think it helped develop my mind for being able to look at a game and break down what’s happening.” Kelley began going to more esports events, where she found even more inspiration. “When I watched Overwatch for the first time in a stadium, I was awestruck by Soe Gschwind. She’s so dedicated to making the show as good as it can be. I try to invoke that diligence in my own work.”

While she admits that, in some ways, she’s “still figuring out” her voice and perspective, Kelley has gained confidence from the supportive Overwatch community as she continues to evolve as “Nekkra” — a name that, unsurprisingly, also has its roots in science.

“One of the first studies I worked on was about the wolf population of Yellowstone National Park,” says Kelley. “And I’ve always loved wolves and dogs, so I thought I’d pay tribute to that.” She found the word for wolf — nekra — in a Central Indian dialect and simply added an extra “k.”

Being a role model and positive example is something Kelley takes seriously, which is why being a part of the Overwatch League’s newly announced “Caster Camp” development program means so much to her. “I would have benefited so much from something like this,” she says. “Traversing the on-camera talent ecosystem — there’s no guidebook for that. I think I would have gotten better faster with this type of mentorship. I’m so excited for it.”

Kelley also feels like the Overwatch community, especially, is fertile ground for new and distinct voices. “As a community, it’s the most welcoming I’ve ever experienced. They pay so much attention to making sure there’s a diverse cast of characters and promoting diversity as a whole. Knowing there’s that support available for marginalized communities is just super, super special to Overwatch.”

The Overwatch Calling All Heroes program is now live and features initiatives such as the Caster Camp and the Challengers Cup from now through the end of 2022. 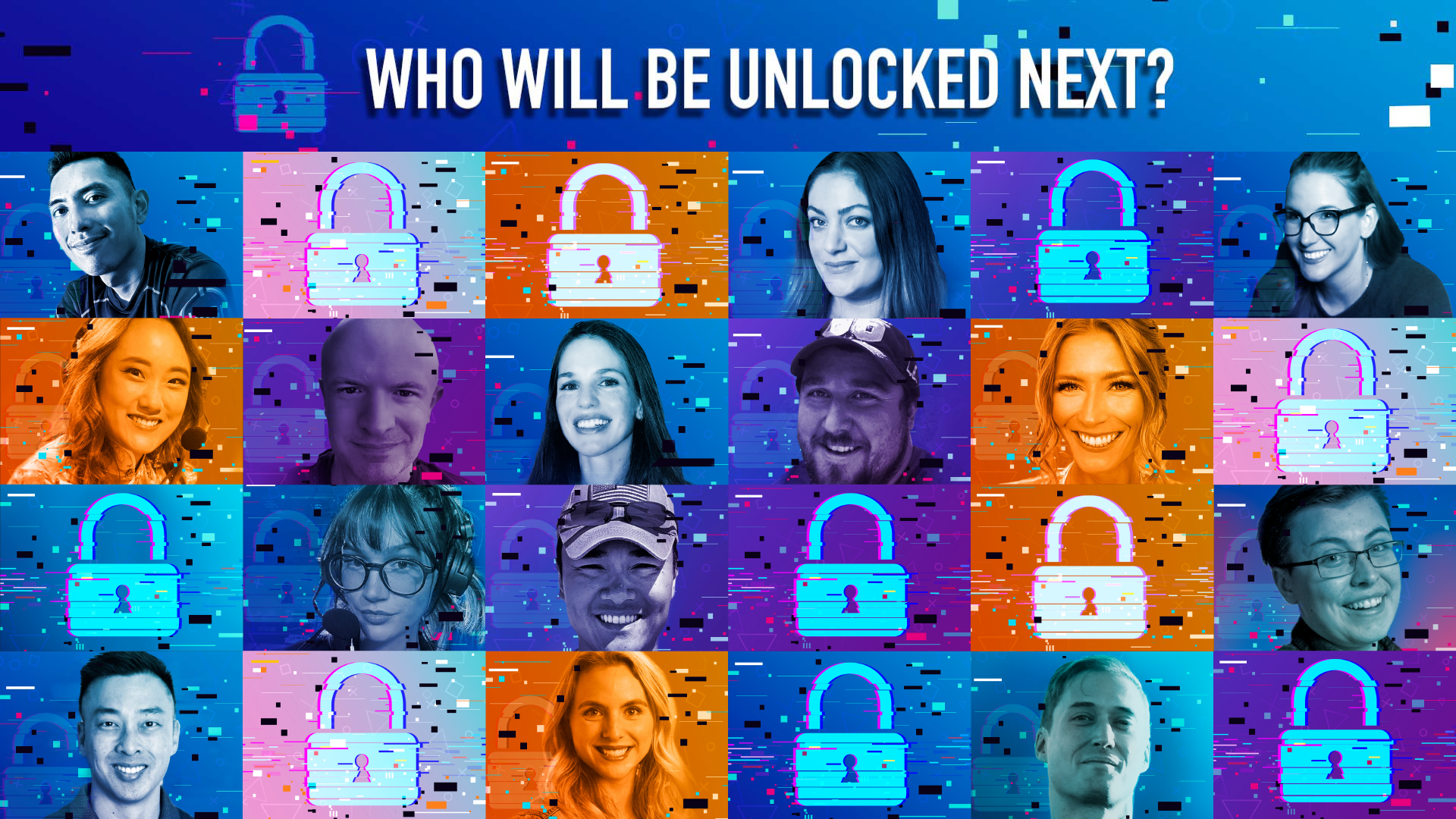