A Passion for the Game: From Banking to Overwatch League

Sean Miller seemed destined for a career in Finance, but his passion for Overwatch kept drawing him back to Blizzard - not once, but twice.

As a kid, Sean Miller would hang out with a friend whose older brother often played Warcraft II: Tides of Darkness.

“I would just sit and watch him play. I was so interested in the game,” remembers Miller, who credits those game sessions with introducing him to video gaming and the Blizzard universe. “Ultimately, I got on the computer too and essentially grew up playing Warcraft and Starcraft.”

“I got into Overwatch®  two months after it released, and it became this awesome outlet for me,” Miller says. “We’d just had our first child. And when that happens, you're not sleeping much, you're not able to go anywhere, and a good video game can honestly keep you sane in a lot of ways. That's what Overwatch did for me.” 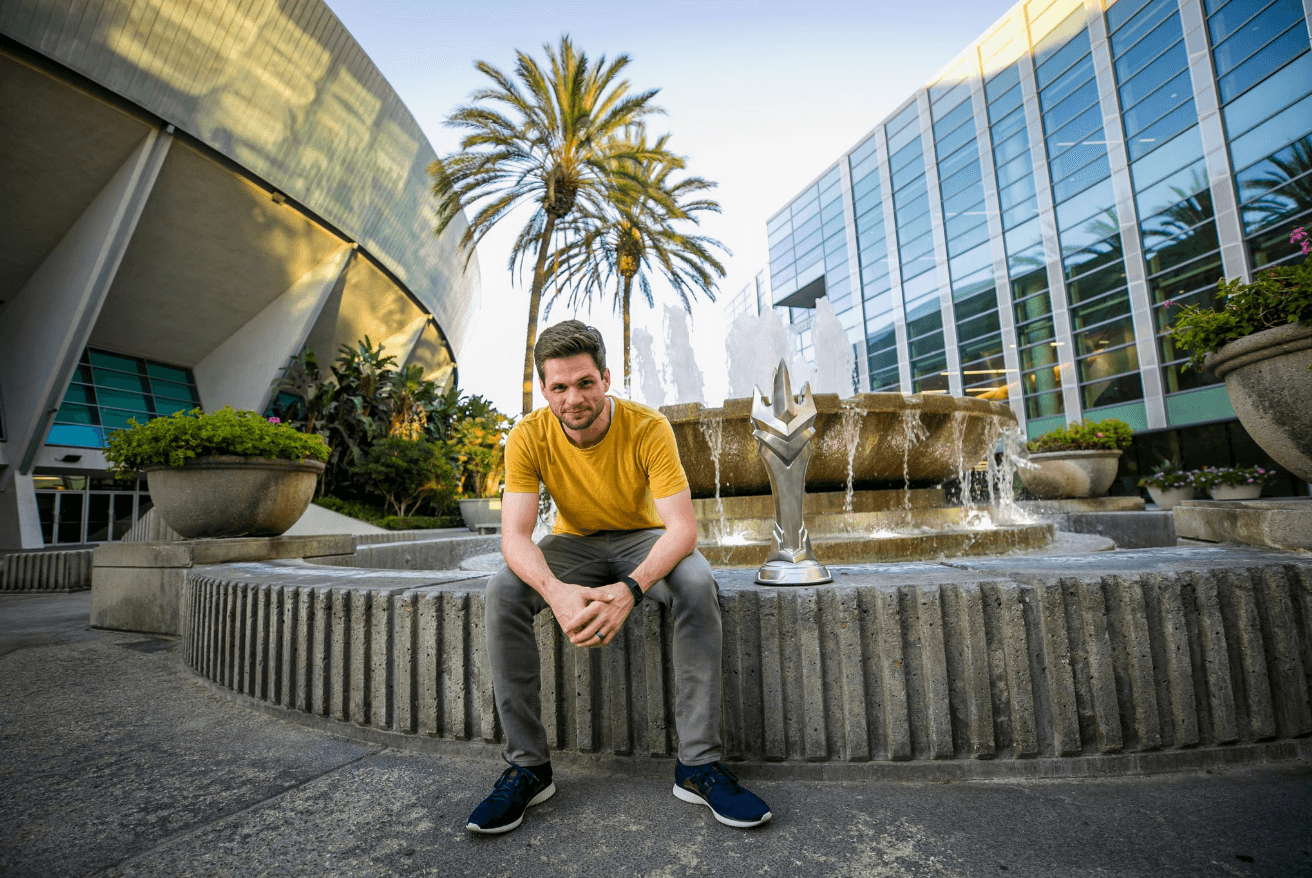 To expand his career and better support his growing family, Miller began pursuing his MBA at Duke University. “While I was there, I sought out an internship at Blizzard, ” he says. “I figured, If I'm going to pivot away from finance, I want to find a company that I love.”

Miller “went as hard as [he] could” to get that internship, which receives over 20,000 applications a year.

“I reached out before I even applied. I sent emails trying to connect with people. I applied to two positions and did everything I could think of to get on Blizzard’s radar,” he says. “Something worked because I received two offers and chose the one with Overwatch League.”

Miller’s passion did not go unnoticed on the Overwatch League’s leadership team. Months after Miller ended his internship and acquired his MBA, Blizzard offered him a position as Senior Manager of Product Strategy and Team Operations. The role would draw on his financial expertise, on product planning and strategy, and managing team business relationships.

In his first year, Miller helped increase viewership for the league as well as team revenue. Then, family circumstances prompted Miller and his wife to consider a relocation to Texas.

“After weeks of contemplating, my wife and I sat down and came to one of the hardest decisions of my career, to make the move,” says Miller, who became a functional CFO in Dallas, Texas.

“In my heart, I didn't want to leave my role here at Blizzard,” he says. “I love this industry and the company. But at the same time, family comes first, and I received an opportunity for advancement that would help us reach our combined goals.” 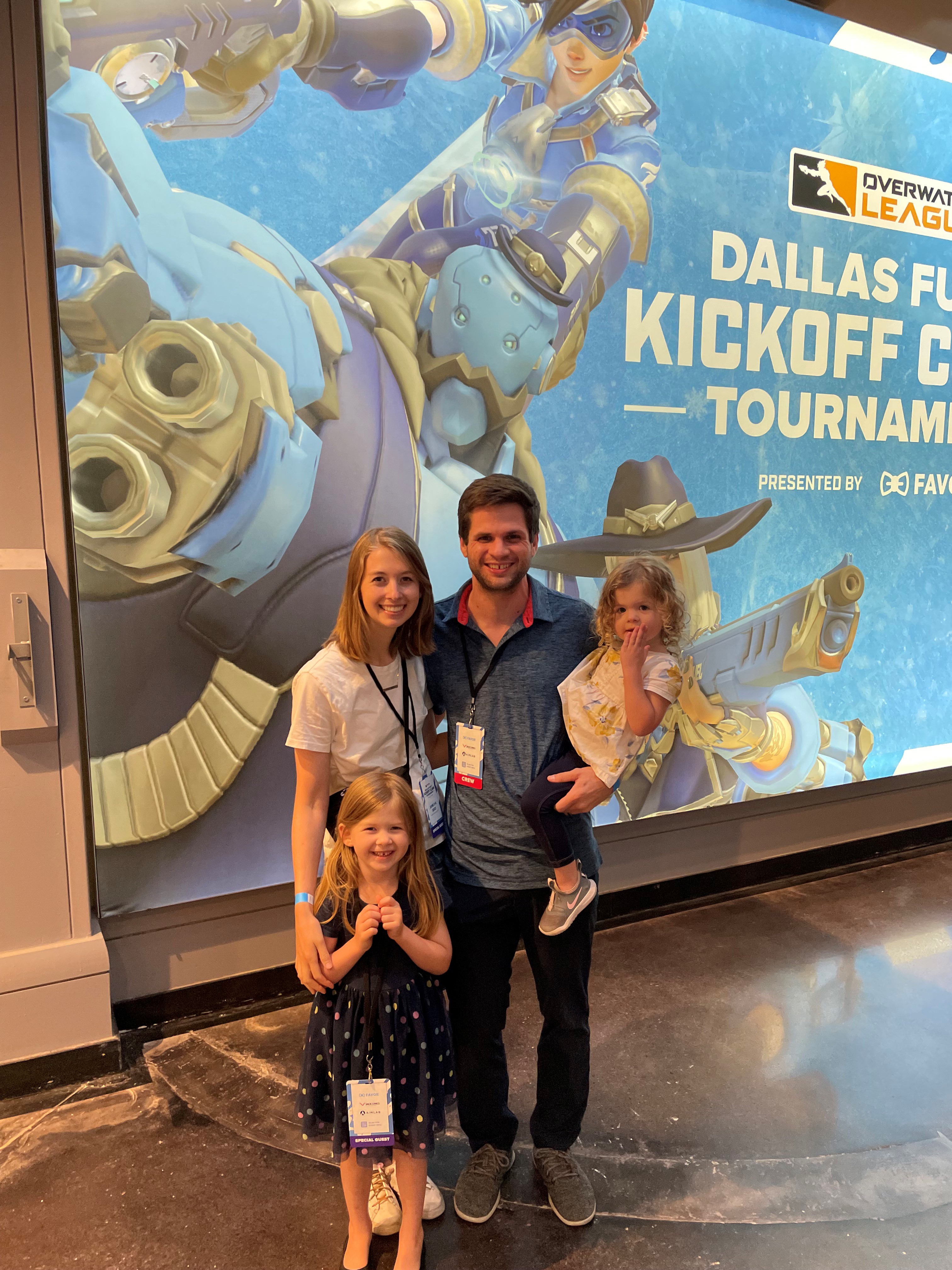 Miller with his family at the Kickoff Clash in Esports Stadium Arlington, Texas.

Back in Dallas, Miller spent his days leading a team whose purpose was to offer strategic counsel to various businesses at the company; getting into the weeds with business leaders and guiding them through long-range planning.

“Despite all the wonderful things that come with a career in finance, it was hard to go back to something that I didn't have that same amount of passion for,” Miller says. “I already had a taste of this sweet apple and wanted more.”

Then one day, Miller received a phone call. Blizzard was offering him a chance to be Head of Overwatch League — a position he’d always dreamed of holding.

“I'm a big proponent of positive entertainment that builds people up, gives hope and inspires them,” Miller says. “Overwatch to me is far and away the video game franchise that does that the best.”

Another advantage the opportunity brought was the ability to continue to live in Dallas, which aligned with his familial goals.

It was a no-brainer. 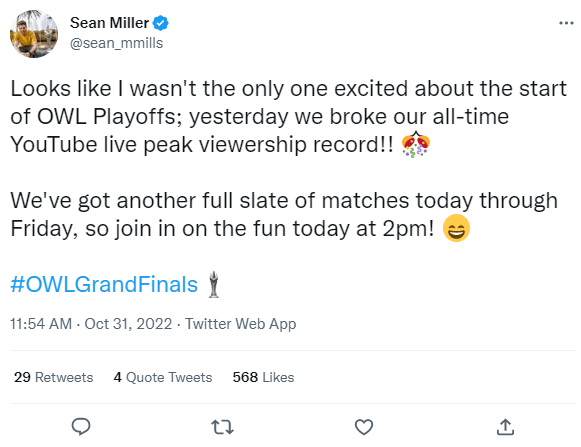 Miller has been working remotely as the head of Overwatch League since December of last year. His main responsibilities include driving the product strategy, making decisions that align various stakeholders, managing aspects of the operations of the league, and determining how best to serve the fans and players while continuing to drive the brand forward.

The impact of Miller’s leadership has continued to prove beneficial for the league along with the Overwatch brand.  The team broke their all-time YouTube live peak viewership record and combined with 25 million players obtaining the new release of Overwatch 2, the future of the franchise looks bright.

“Being here at Overwatch feels like the authentic me,” he says. “I’m in a place where zero people care if I play video games because everybody does. It really does feel like I’m home, here at Blizzard.”

Watch the Overwatch League playoffs live and find out who will raise the trophy.