From in-game activations to real world events, the Call of Duty Endowment and the Call of Duty franchise together have raised the bar for corporate philanthropy. Today, over 110,000 vets have been placed in high-quality jobs.

Right from the start, the Call of Duty Endowment knew exactly what it didn’t want to be. “I call it the ‘fire and forget’ philosophy,” explains Call of Duty Endowment Executive Director Dan Goldenberg. “Typical corporate philanthropy entails writing a big cardboard check, doing a quick photo shoot, and then they’re off. We don’t believe in that. It’s what makes us different.”

The Call of Duty Endowment is dedicated to its core mission of raising awareness around the struggles facing veterans trying to enter the workforce – but its methods of doing so are what truly set it apart. The Endowment goes deeper than just ensuring that nonprofits actually follow through on their promises. Their mission is to be an engaged part of the process from start to finish - to innovate, energize, and forever alter what constitutes “typical corporate philanthropy.”

For Goldenberg and the entire Endowment team, there is a deep acknowledgement that nothing they do - from raising awareness to innovating in the philanthropy space to building engaged communities – would be possible without support from and close collaboration with the Call of Duty game franchise. Johanna Faries, Call of Duty’s General Manager, enthusiastically agrees. “Through the Call of Duty Endowment, we are able to not only directly address the needs of our veteran community and give back to them in meaningful and impactful ways, but we also honor their stories and experiences in the game itself – reaching millions of vets, active-duty military personnel, and gamers around the world.”

Here are five ways the Call of Duty Endowment has changed the nonprofit space for the better through unique, impactful, and fun activations, events, and initiatives that go above and beyond giant novelty checks.

The Seal of Distinction

There may be no greater example of the enormity of the Call of Duty Endowment’s impact on the nonprofit world than the creation of the “Seal of Distinction.” A program through which organizations are not only thoroughly vetted to ensure that they – quite literally – put their money where their mouths are, but one through which these organizations are then re-certified every two years in order to maintain consistency and integrity. It is nothing short of a benchmark for social impact. 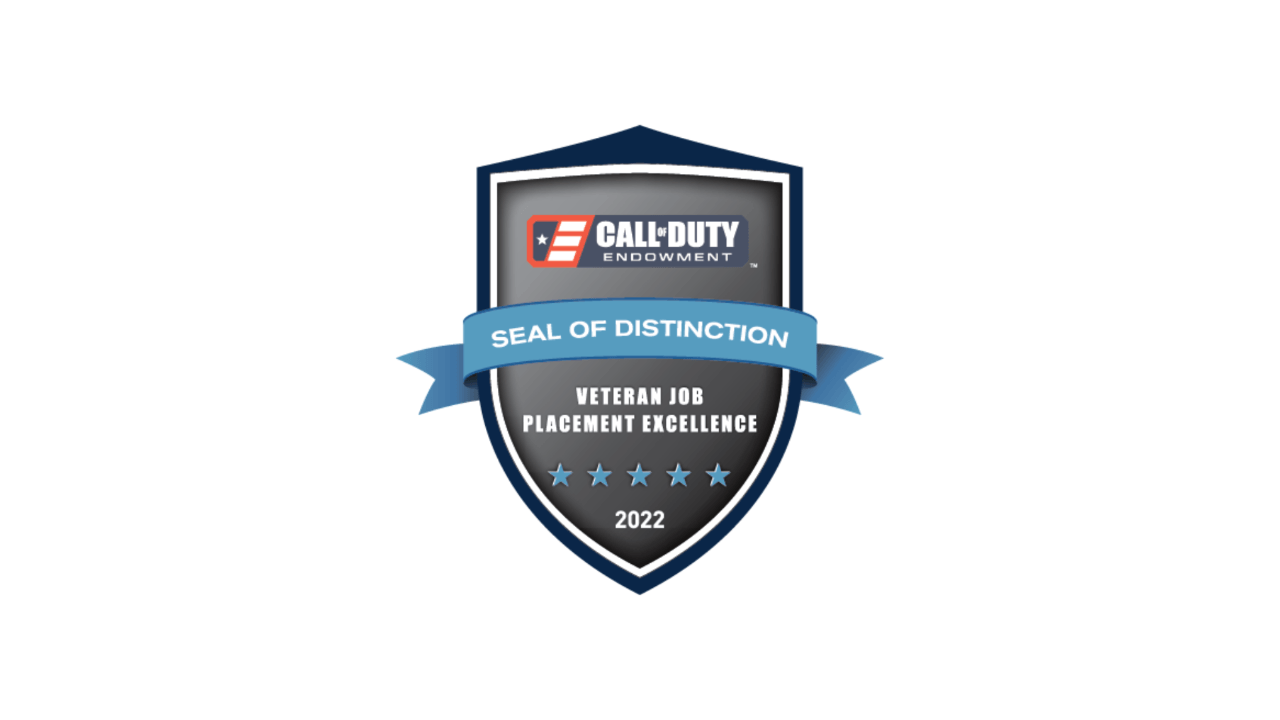 The Seal you can trust

“The Seal of Distinction program has made us one of the most effective veteran nonprofit organizations in the United States,” says Helene Imperiale, Director of Corporate Social Responsibility and Call of Duty Endowment Marketing. “We are really at the forefront of corporate social responsibility in terms of efficiency and effectiveness.”

The strength of the program lies not only in making sure organizations keep their promises, but also in avoiding wasteful or ineffective spending. “We’ve been able to identify organizations that place veterans at 1/10th the cost of the Federal Government’s efforts, into higher quality positions. That’s pretty remarkable.” says Goldenberg.  “And since we’ve proven this model for nine years now, others in this space are coming to us for recommendations because they know the process our grantees go through. It’s enabled us to put market forces behind an area of philanthropy where there aren’t many.”

Sharing a connection with one of the most popular video game franchises in the world affords the Endowment unique opportunities to support its efforts, to say the least. When you can organize a massive esports event where active military personnel around the world go head-to-head over games like Call of Duty, you have the perfect storm of fun and excitement that amplifies the Endowment’s reach. “It helps us engage the military community, the esports community, and the Call of Duty community to showcase what we do through friendly competition and rivalry,” says Imperiale. “And the funds we raise through sponsorships helps place more veterans – because just $547 puts a vet in a high-quality job.” 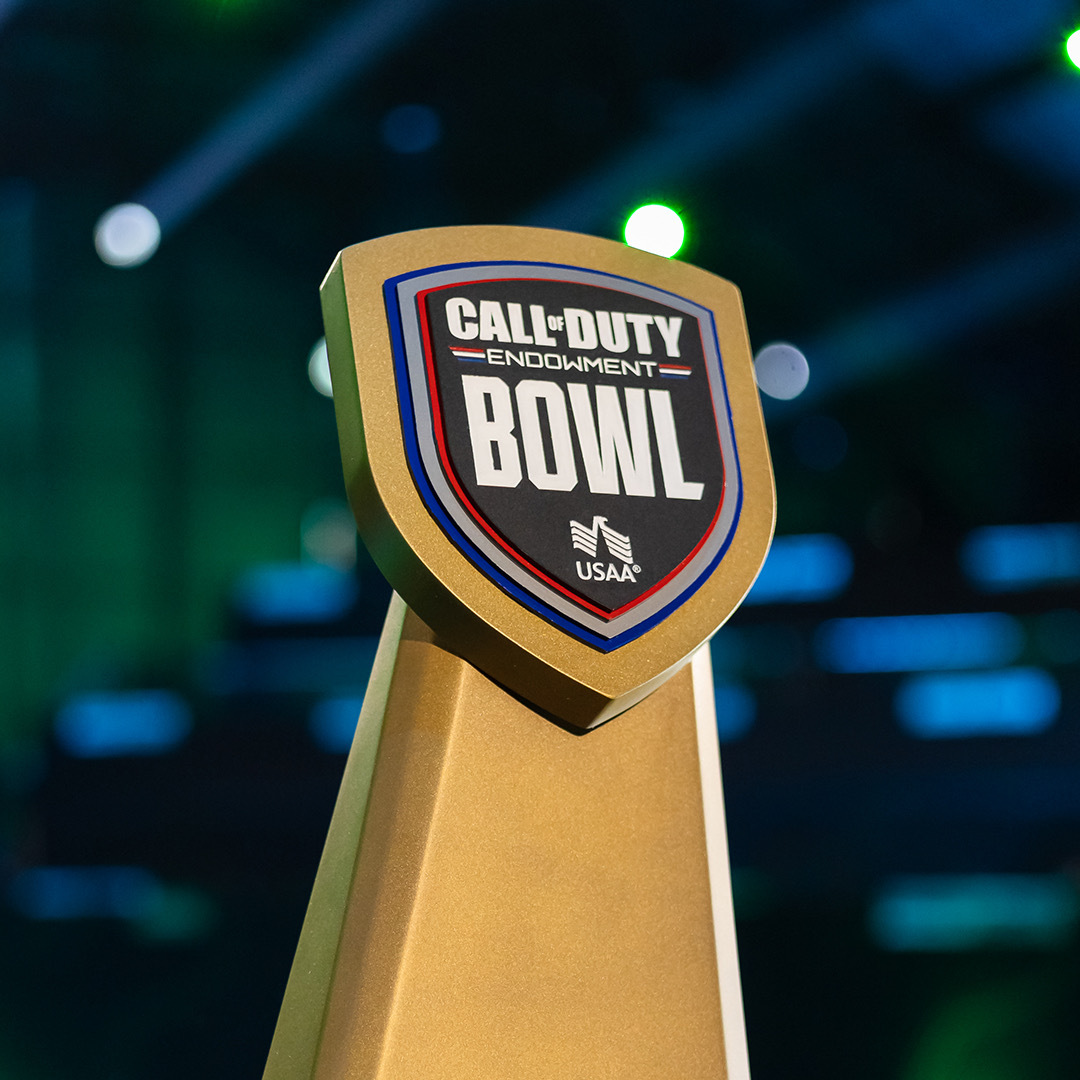 For the third C.O.D.E. Bowl, which is set to kick off this December, every branch of the U.S. and UK military will compete for the coveted trophy. “There might not be a better example of how Call of Duty and the Call of Duty Endowment come together than the C.O.D.E. Bowl – it’s a marquee event that spotlights the best of what we do for gamers and fans within the military,” says Faries.

The event draws inspiration from the revered Army-Navy football game and aspires to be a significant part of military culture in much the same way. “I love the Army-Navy game, but I also love that the C.O.D.E. Bowl isn’t just two branches or even one country – it’s two countries, all services, all ranks,” says Goldenberg. “Plus, the average age in the U.S. military is 24 or 25, and they connect to gaming so much on a cultural level.”

There may not be a more common form of non-profit fundraising than the charity run – but even in this well-trod space, the Endowment thought well outside the box. What if you could have a charity run where participants were not impeded by the pandemic, geography, physical limitations, or even time schedules? The Call of Duty Veteruns campaign created a virtual race within the world of Call of Duty that pushed the boundaries for both in-game and real world activations. 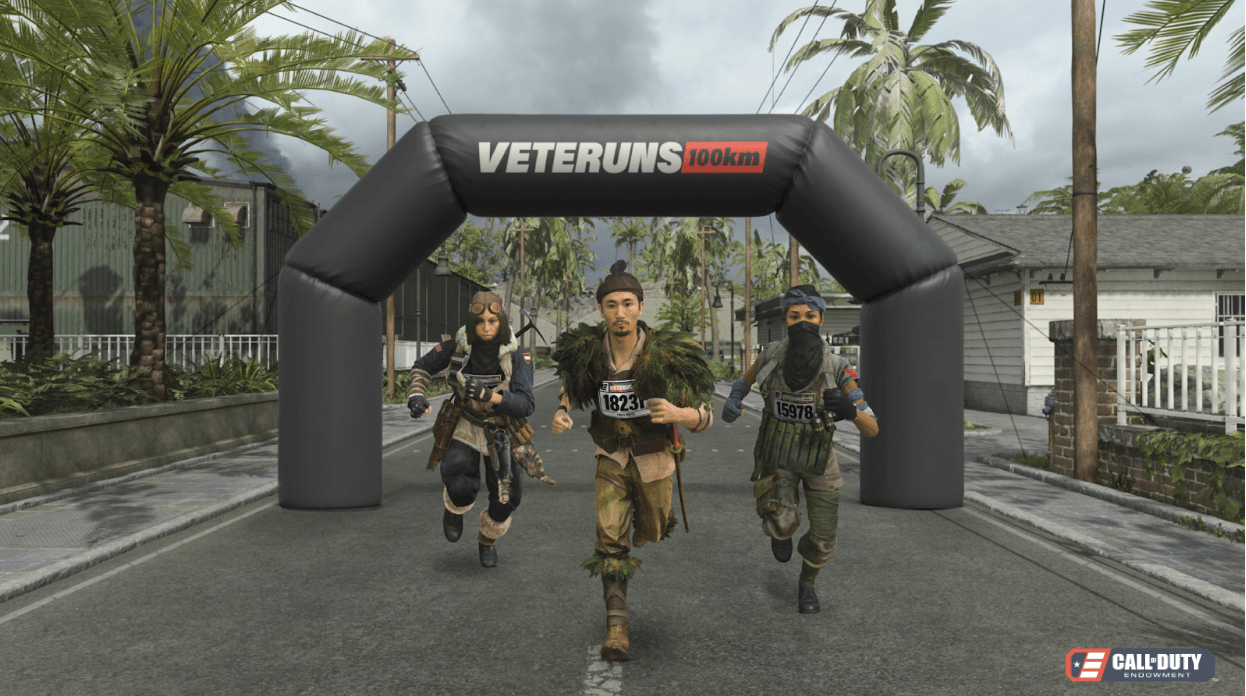 An all-new take on the charity run

“It started with our creative agency, Gut, who had this incredible idea of taking the practice of charity runs and making it unique to Call of Duty,” explains Imperiale. “Then we thought, ‘how do you make this bigger?’” Imperiale and her team partnered with Twitter to amplify the activation, creating leaderboards and in-game rewards to fuel friendly rivalries and increase engagement.

When the dust settled, the takeaways for the Endowment team were clear. “Fandoms provide the greatest amplifications for events like these,” says Imperiale. “Leveraging the core game audience and engaging them with something that was authentically Call of Duty – it was such a unique way to break through and create more awareness for the Endowment.”

For Military Appreciation Month in May of 2021, the Endowment began working around the insight that in the midst of the COVID-19 pandemic 50% of former medics and hospital corpsmen could not find jobs in the civilian healthcare industry.  From there, an integrated marketing campaign was developed to raise awareness around this issue that involved an in-game pack, challenge, and rewards, while also telling the first-hand experiences of former medics and corpsmen the Endowment had placed into jobs.

The Call of Duty Endowment introduced an in-game pack for Call of Duty: Warzone and Call of Duty®: Black Ops Cold War. The “C.O.D.E. Battle Doc Pack” was created in collaboration with retired U.S. Army Combat Medic Sgt. 1st Class Timothy “Doc” Hobbs, Jr., an avid Call of Duty player whom the Endowment helped place into a high-quality job through C.O.D.E. grantee Still Serving Veterans. Sergeant First Class Hobbs was deployed on four combat missions in Iraq and Afghanistan and on one humanitarian mission after Hurricane Maria in Puerto Rico.

In addition to the in-game pack, there was the “Revival Challenge,” where players who  revived five people while playing within Call of Duty®: Warzone would unlock a unique Call of Duty Endowment calling card. One million players completed the challenge, and unlocked a double-XP Day for all Warzone players. To emphasize Activision’s commitment to the Endowment, for every challenge completed Activision Blizzard donated $1 to the Endowment up to $1,000,000.

Alongside the Pack was a social media campaign driven by the hashtag #CODEMedicalHeroes, which saw this message reach millions of people worldwide. In addition, each purchase of a Pack went directly to fund job placement for U.S. and U.K. military veterans. To date,  the campaign has won the most awards of any Call of Duty Endowment campaign for its impact and innovativeness.

“This was our first fully integrated marketing and communications campaign,” says Goldenberg. “And it made a huge difference. People who could patch Marines together in the Khyber Pass or inoculate civilians in East Africa are being told they can’t ride in the back of an ambulance. So, we dug in, gained an understanding of the problem at a fundamental level, and then created awareness around it.”

Adds Imperiale: “We saw former medics and hospital corpsmen coming out on social media saying, ‘This really resonated with me. Our community never gets this kind of spotlight.’ It was just incredible.”

The most recent example of how the Call of Duty Endowment’s real world mission is reflected in-game, builds upon the idea sparked by #CODEMedicalHeroes, and takes it a step further by creating for the first time a playable operator whose backstory could well be an Endowment success story. 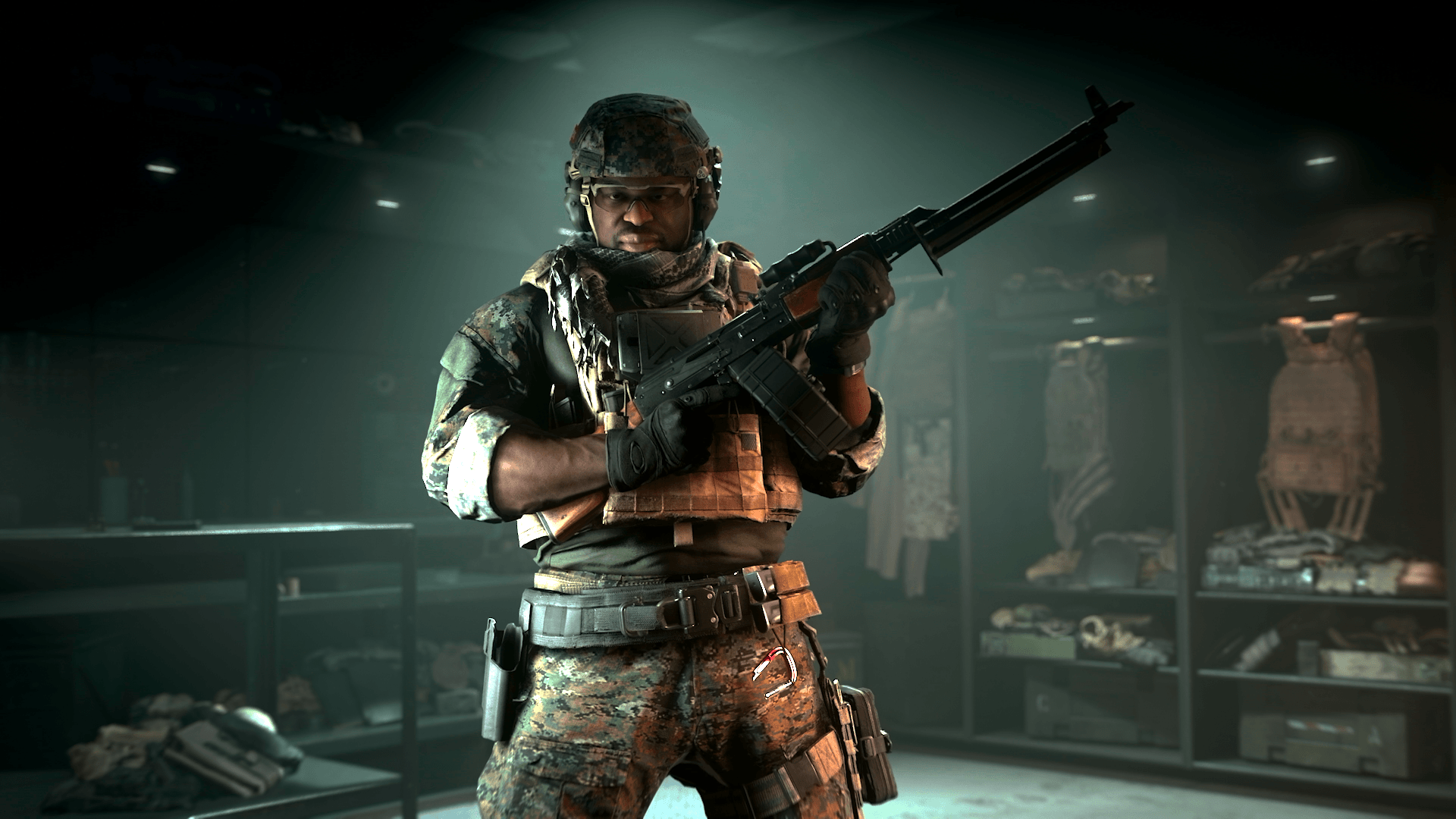 Hutch in action in Call of Duty: Modern Warfare II

The character of “Hutch” in Call of Duty: Modern Warfare II is a Marine veteran, who was placed in a civilian job before deciding to re-enlist in the reserves – and the timing of his creation couldn’t have been better from an Endowment perspective. Michael Maggitti, a former active duty Marine, had just joined Activision and began working with the Endowment. Given how relatable Hutch’s story was to Maggitti, he was given the chance to work directly with the Call of Duty: Modern Warfare II narrative team to ensure every detail was as authentic as possible.

“As a fan of the franchise, I’ve always appreciated the realism and diligence our Call of Duty team puts into each character within each title,” says Maggitti. “As a Marine, it was important to highlight the cerebral and physical aspects of Hutch, since he relies on both to complete the mission.”

Maggitti and the Endowment team hope that the efforts to show Hutch as multifaceted and deeply layered will help his character connect with the military community while also giving their larger initiatives a playable face. Adds Maggitti, “Service members may share uniforms, gear, and fighting holes, yet each of us are different and come from unique backgrounds.”

“I hope the military community is inspired by the fact that Hutch will serve as the first digital grantee placed into employment by the Endowment,” says Maggitti. “Embedding the mission of connecting veterans and jobs within a character narrative is truly art imitating life.”