An animator with 14 years of experience in the video game industry, Le discusses his shift in ambitions from 2D to 3D work, the process of weapons animation, and how he’s helping forge the next generation of talent. 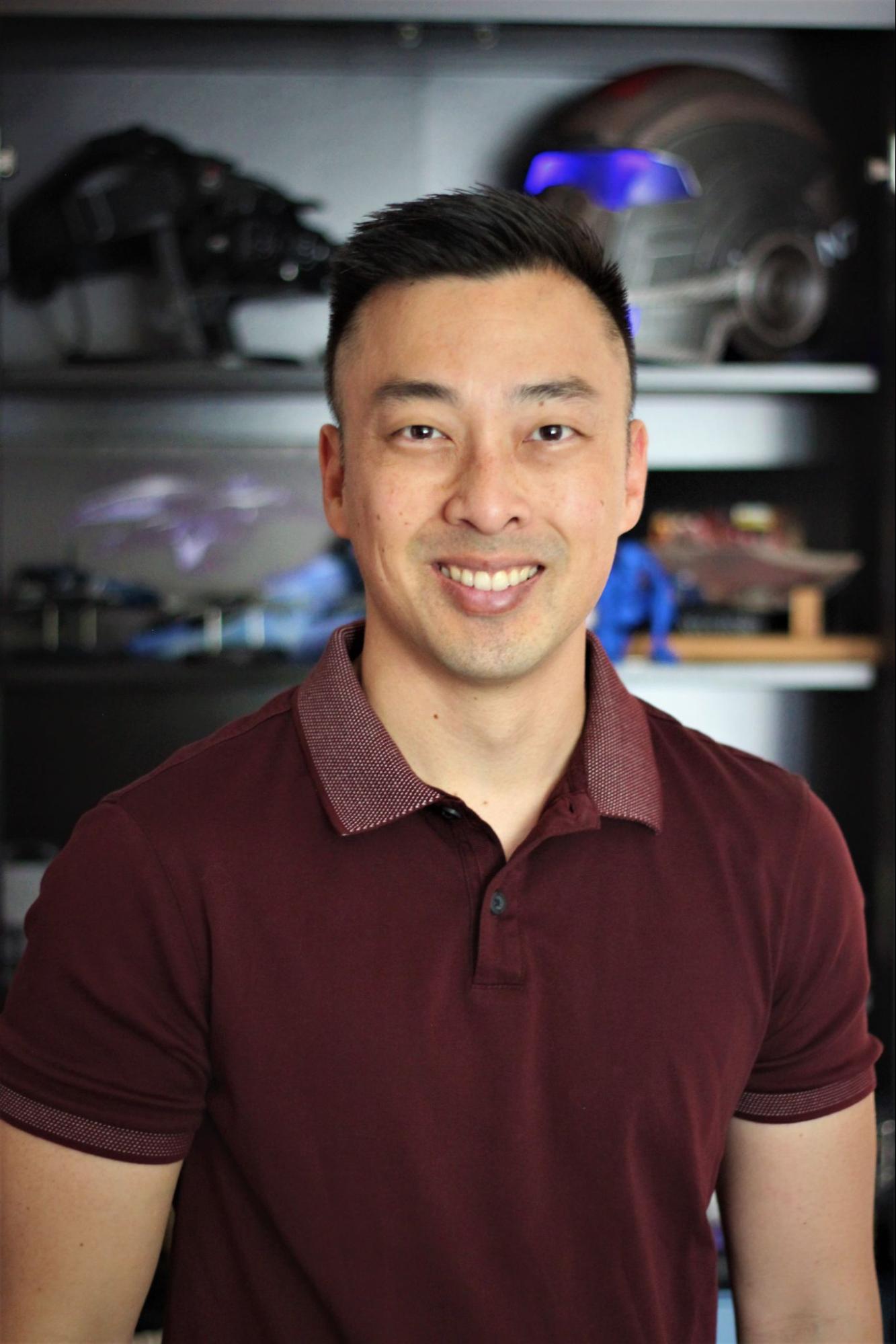 “I’m passionate about this. I love being surrounded by other like-minded artists" - Khoa Le, Animation Director of Weapons, Infinity Ward

Despite his childhood ambition to work as a 2D animator on films, it became increasingly apparent to Khoa that 3D animation was the wave of the future. “I had to adapt,” he says, as he sought work after college. “I learned Maya for 3D animation, but I didn’t feel that I’d honed my craft enough to jump onto a feature film. Gaming seemed more accessible.”

Shortly after getting his foot in the door of the gaming industry, he landed a contract gig for his first AAA title as part of the cinematics team at a well-run studio. “The studio was run by these film people who held their standards from making films and brought it into gaming. That really drew me to the studio, the realization that there’s a place in gaming to apply passion, drive, and detail.”

Inspired to see how far he could push his animation skills within gaming, he stuck with the industry. “That level of polish intrigued me, and that led me from one studio to another and ultimately to Infinity Ward.”

When Khoa revealed in March 2022 that he’d been promoted to his new role as director, it didn’t go unnoticed by fans in the r/modernwarfare subreddit. They cheered his promotion and discussed his team’s animation work in 2019’s Call of Duty: Modern Warfare®. 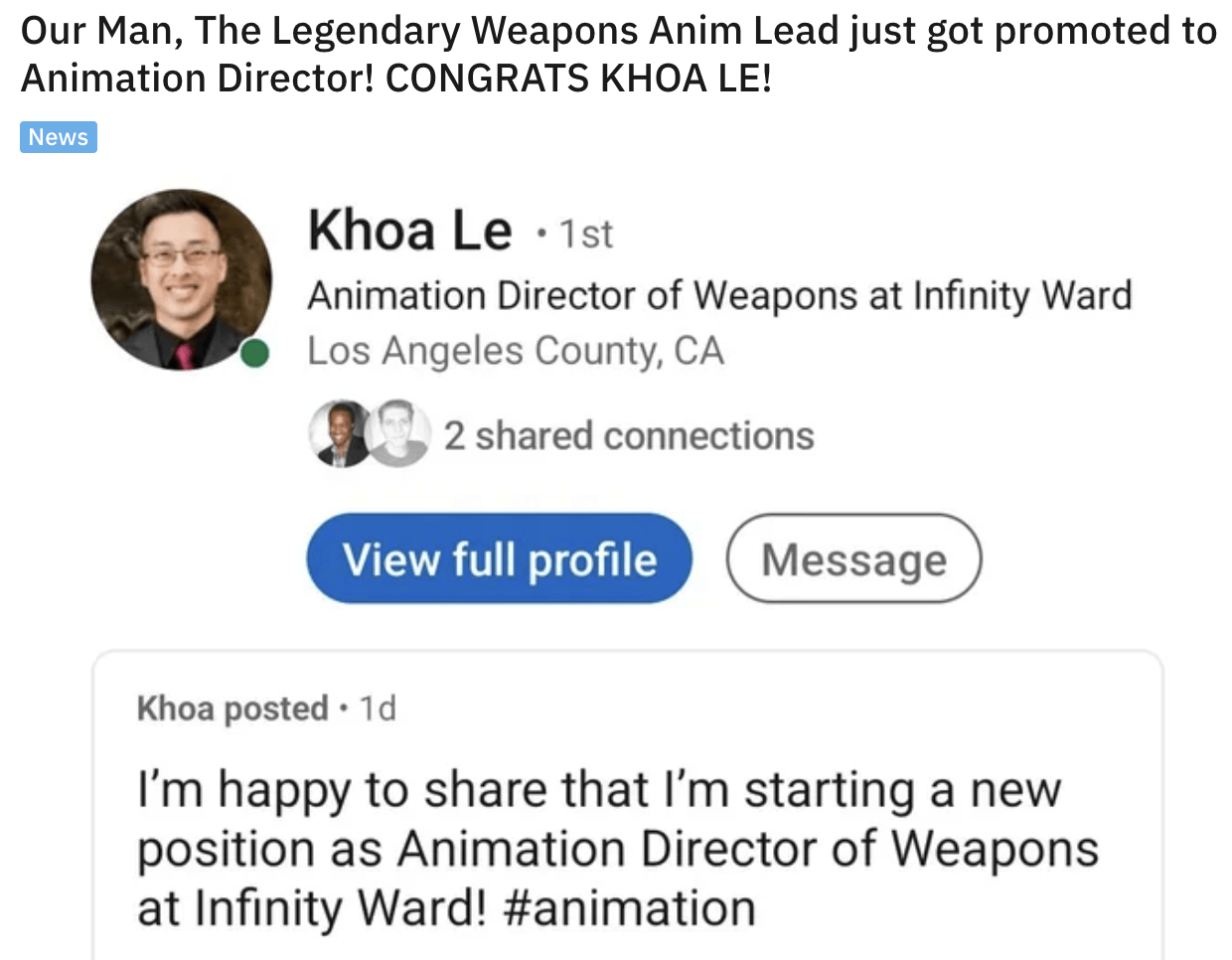 “My scouring of reddit wasn’t so much for validation,” he says. “It was more, 'Did I do right by the community?'. I want to make the fans happy since they’re the ones playing and talking about the game.” Through his searching, he encountered comments questioning the functionality of different in-game weapons. “'Why does it have this kind of reload? Why does it do this or that?' I love teaching, and it gave me a chance to educate the general public about why we do certain things. As long as things remained respectful, I kept an open dialogue.”

The Process of Weapons Animation

“When we’re given an assignment to start animating a weapon,” he says, “I start with one thing: research, research, research. I’ve got to know how the weapon functions because otherwise I fear representing it the wrong way. That would eat at me, so I do as much research as I can.”

Khoa was first introduced to firearms through a friend. As a lifelong athlete, he was immediately drawn to the required discipline. “I liken it to a tennis player, where you spend your entire life swinging the racket for hours and hours, honing your craft and muscle memory…to get that ball to the precise spot you want it. In shooting, you’re doing just that, hitting a precise target.” He adds, “I enjoy learning about tactical shooting and then applying it with an animator’s eye.”

Forging His Own Path

Though he knew from a young age that he would work as an artist, it didn’t exactly square up with family expectations. “My Dad’s a doctor,” he says. “As an Asian American kid from the ‘80s, it was expected that the firstborn son follows in his father’s footsteps, but I went in the opposite direction.

“It was tough, but it also drove me to succeed.” Now a father himself, Khoa plans to be more open with his daughter. “I want her to understand that art is a viable route and that I’m not going to steer her away from her passions.”

When asked what advice he’d give to other budding artists who may not feel supported in their craft, he draws it back to the work itself. “Take solace in what you do and love,” he advises. “That certainly helped me. I drew every day and I continue to draw every day. That keeps me going. That and being surrounded by like-minded artists certainly helps. It pushes me. My wife is also an animator, so my love led me to her.”

Not only does she work in the same field, but she’s also the reason Khoa works at Infinity Ward today. “She was the one who got me the job at Infinity Ward. She was an animator there when I was at Insomniac. When there were openings, she suggested that I apply. We have pretty much the same resume. This situation has been my entire career, her being only a few feet away while we do the exact same thing.”

“I love working here,” he says. “As an artist, you always want to put your own stamp on things, and they’ve given me a lot of autonomy and trust to do what I want. All that creative energy has to go somewhere, and the studio has given me the opportunity to do that. That kind of trust is a rare commodity in this day and age. It’s also being around other artists that work well with each other, communicate well, and are talented. That’s what keeps me here.” 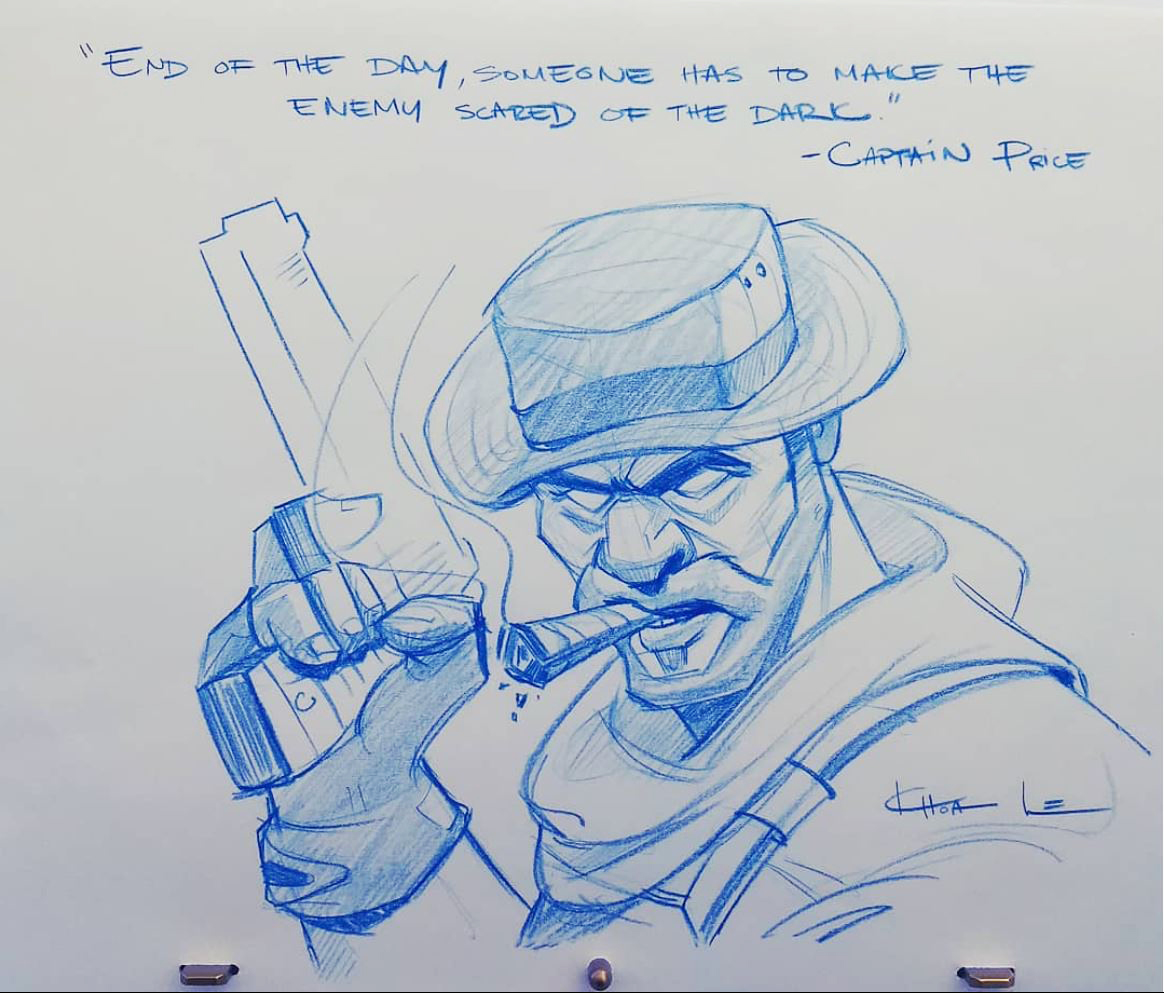 Khoa’s sketch of the one and only Captain Price.

On a franchise as storied as Call of Duty, the aim, always, is to hit the level of quality expected from the series. “As long as I have something to focus on, I don’t freak out.” He adds, “There’s also my family. My wife and kid step in and put me back on ground level, so I can reset and get through the day.” Moreover, there’s the pride of ownership, the fact that he has been entrusted with a job that he wants to do to the best of his ability.

Khoa is still adjusting to the leadership role as an artist. “As an animator, you’re always moving up the ladder, and eventually you move into a lead role, at which point you’re expected to mentor and teach, while leading teams. This is an aspect of my job that I enjoy.”

More challenging is finding the balance in delegating work. “I can’t take on everything myself,” he says. “That’s been the hardest adjustment as far as becoming a director, being able to delegate and let go of that responsibility. It’s so easy as an artist to see what needs attention and just want to do it, but I have other responsibilities. I’ve got to delegate to my team and mentor them so they can take it on and be successful.”

Still, he finds the time to animate. “I am still animating quite a bit. How do I expect my team to trust me if I don’t do it myself? I have to understand what they go through to be able to guide them and help make the right decisions. I value my team and I respect their time. Part of it is finding the balance.”

He’s thankful for the opportunity to work at the studio, reminiscing over his early days. “Infinity Ward was my wife’s work family and I was the outsider trying to win over their approval,” he says. “We were on different teams, in different rooms, but she started doing this thing where she would call my name from across the hallway like a bird call....’khoaaaaa, khoaaaaa.’ Now others at the studio use it to get my attention. If it wasn't for her, I wouldn't be at IW or in the position I'm in right now.” 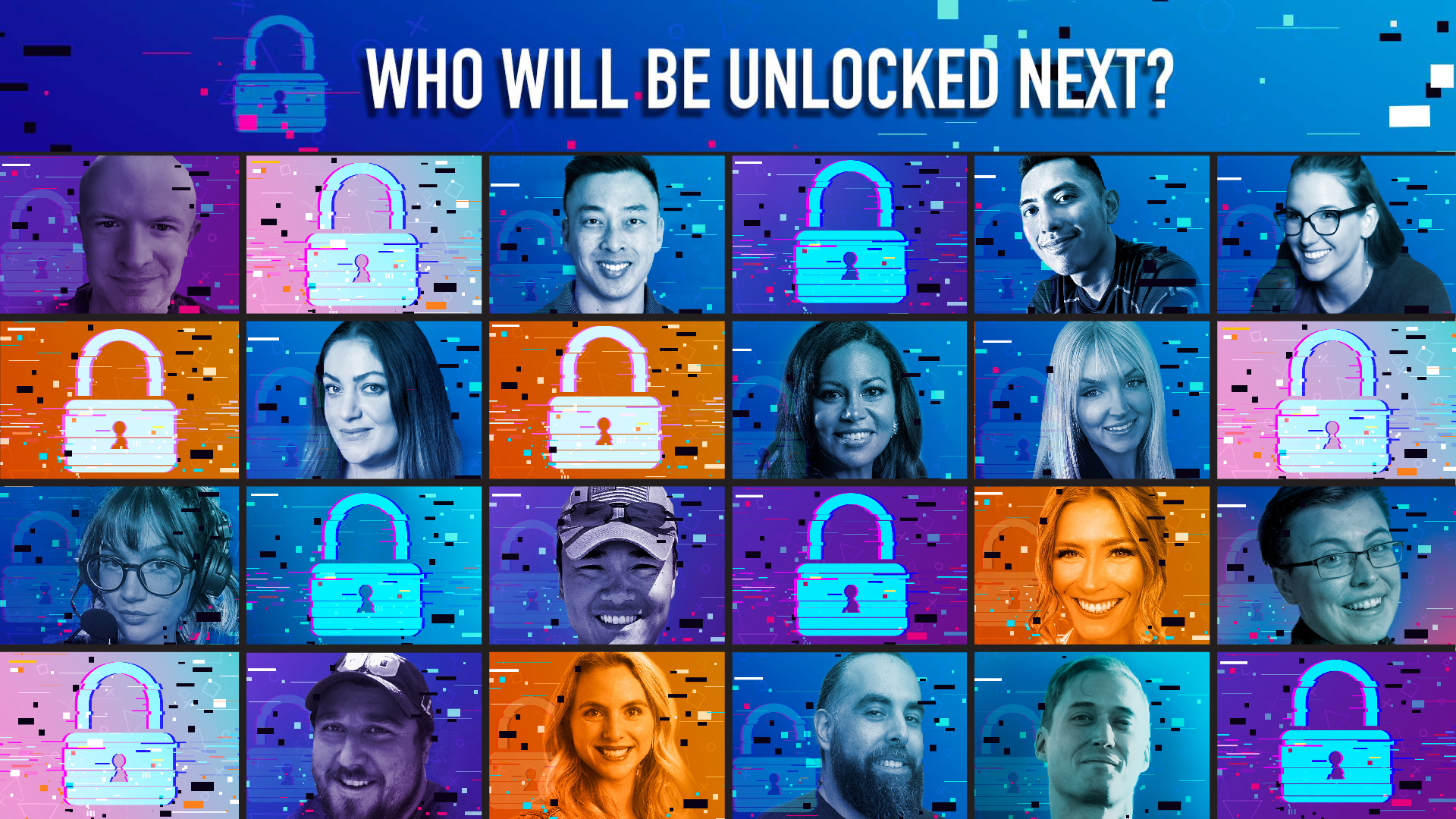