Couture of Duty: Behind Activision Blizzard and Otis College of Art and Design’s Unique Collaboration

How a Call of Duty-themed virtual fashion show came to represent so much more for the Los Angeles-based creative arts institution, and our own creative leads

For a school that was built on creativity and artistic expression, Otis College of Art and Design paints a beautiful picture with just cold, hard numbers.

Out of its 1,200 students, 77% are people of color. 26% come to its Los Angeles campus from abroad, while 30% are first-generation college students. A majority (87%) of the students receive scholarships and financial aid that provide paths to creative fields not often accessible to lower-income families. Most recent figures for the Class of 2020 show that 86% of graduates were employed or had enrolled in graduate school, a year from graduation. It is as if someone set out to create the perfect laboratory conditions for cultivating fresh ideas.  As companies scramble to prepare for a future that is just now taking shape on new and evolving platforms, Activision Blizzard and Otis are investing in the next wave of talent, now.

To close out their Spring 2022 semester, Otis College President Charles Hirschhorn invited  a mentorship group from Activision Blizzard – led by its Chief Creative Office Pelle Sjoenell (who also serves on Otis College’s Board of Governors), Activision Senior Art Director Tim McGrath, and Activision Associate Art Director Allyson Smyth – to collaborate on a unique project that combined Otis College’s dedication to removing boundaries for its students with Activision Blizzard’s drive to mentor and inspire the next generation of creatives (and push itself to think differently about its games and franchises in the process).

What followed was an unexpected melding of Activision’s tactical action franchise Call of Duty with high fashion where both the mentors and the mentees came away with entirely new perspectives.

Otis College has deep roots in Los Angeles. Established in 1918, it was the area’s first professional school of the arts. Starting in 2007, the school began commissioning a study called the Otis College Report on the Creative Economy, which affirmed the institution’s commitment to not just fostering creative people, but to also preparing them to channel their talent into actual, viable careers.

“Ninety-four percent of the kids who graduate get employed, and it’s not by luck,” says Hirschhorn. “They get employed because they’re talented and because for four years they’re working in an environment that includes mentors and internships and partnerships and engagement in the creative economy.” Hirschhorn appreciates conservatories and other institutions where the focus is put more squarely on pushing artistic boundaries but he’s clear on where Otis stands “We’re not that. We’re the other place. We’re the place where companies like Patagonia and Disney and Nike and Activision Blizzard come to mentor. Our faculty understand the importance of resume-building and employment.” 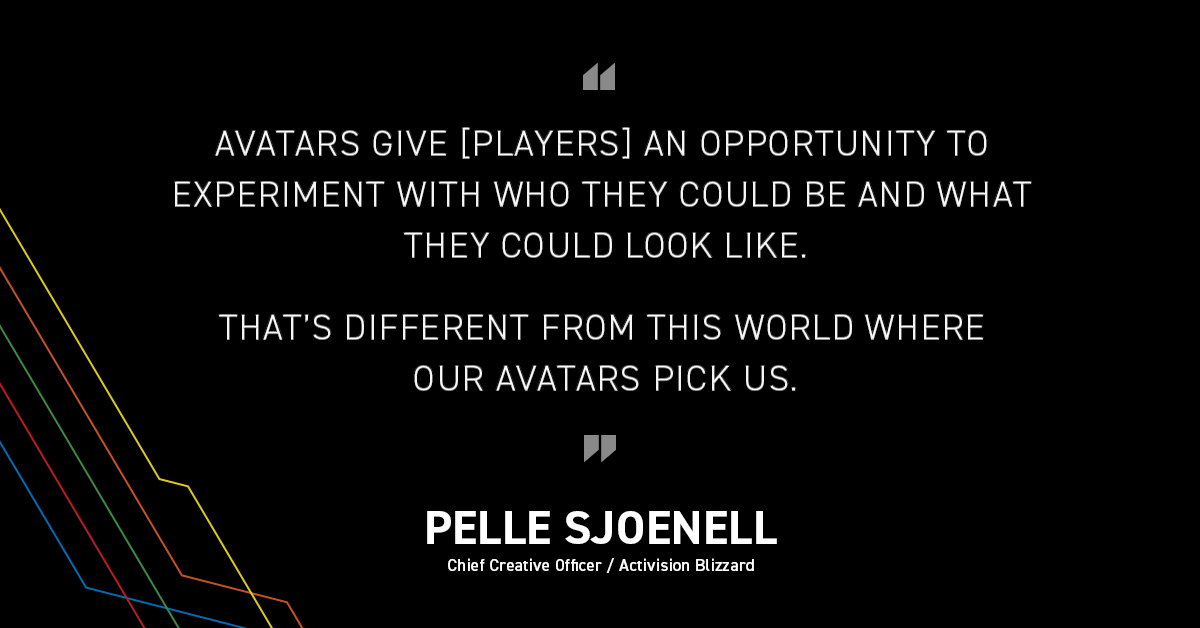 When it comes to creative forethought in both the artistic and commercial spaces, Hirschhorn doesn’t just talk the talk. When he was named president of the school in 2020, he brought with him a distinguished track record. As Vice President of Development for Fox Broadcasting, he launched the groundbreaking and iconic sketch comedy series In Living Color. As Vice President of Production at Disney, he brought new and diverse voices to audiences with films like Wayne Wang’s The Joy Luck Club. And years before there were anything like live streaming platforms – or even YouTube for that matter – Hirschhorn founded G4, the first TV network dedicated to video games.  These elements – finding new talent, amplifying new voices, and appreciating the multi-platform power of gaming – coalesced for Hirschhorn into a need to bring more digital and gaming content to the Otis curriculum. The Call of Duty project was a direct result of these efforts.

“In the last few years, we’ve begun to see how digital has played a bigger role in all of these fields of art and design,” says Hirschhorn. “Artists and designers have options to pursue their talent in traditional, physical forms or in newer, digital forms.” In addition, the partnership with Activision Blizzard provided an opportunity for Otis students to work inter-departmentally in ways they never had before. “The Call of Duty project was a real step forward in terms of curriculum, where we had Fashion Design students and Digital Media students working together for the first time on a digital fashion show.”

Students from the fashion program and the digital design program were presented with three Call of Duty games and allowed to choose which themes, color palettes, and time periods they wanted to work with: Call of Duty: Black Ops Cold War (with its 80s-set aesthetic), Call of Duty: Modern Warfare (a contemporary military look and feel) and Call of Duty: Infinite Warfare (a more futuristic, sci-fi theme). After seven weeks, the student teams presented a complete line of digital clothes set against a complementary virtual runway. 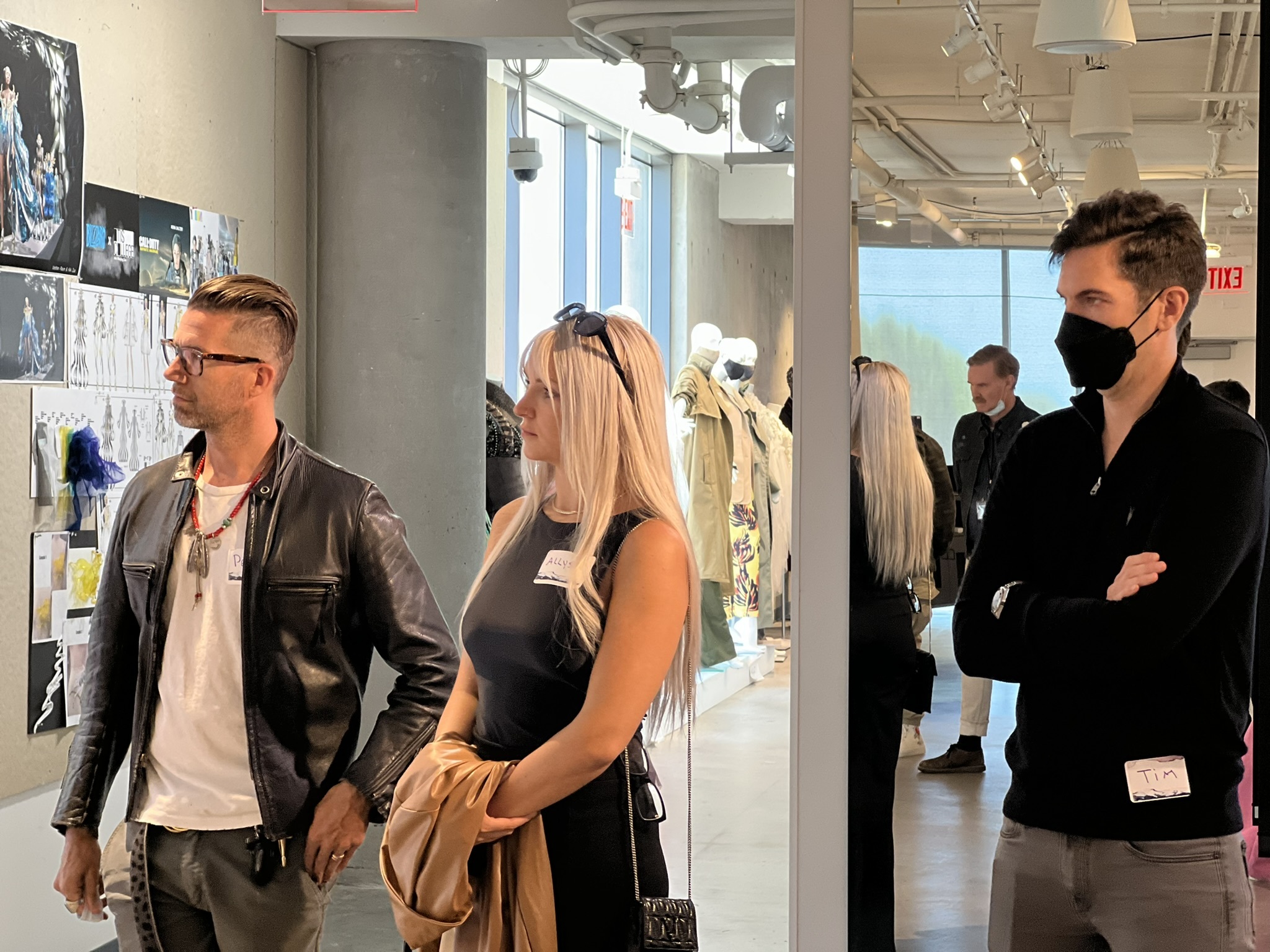 “I think that designing for the virtual runway, is a brilliant and beautiful thing, beacuse in a way that is what games are today.” says Sjoenell. “And in our worlds, a huge part of the experience and the joy is getting virtual goods for your online identities. We call it “Peacocking”, when you flaunt your achievements or style through your “Skins” or avatars.”

Jill Zeleznik has served as the Chair of Otis’ Fashion Design program for over 20 years and was immediately taken with the idea of mixing the game experience with virtual design. “It was because of Charles and Pelle that the Digital Media and Fashion Design programs departments got together to collaborate like this for the first time,” she says.  “For this first project, they gave us color palettes and character designs and, along with Tim acting as mentor, we told the students, ‘The sky’s the limit.’” 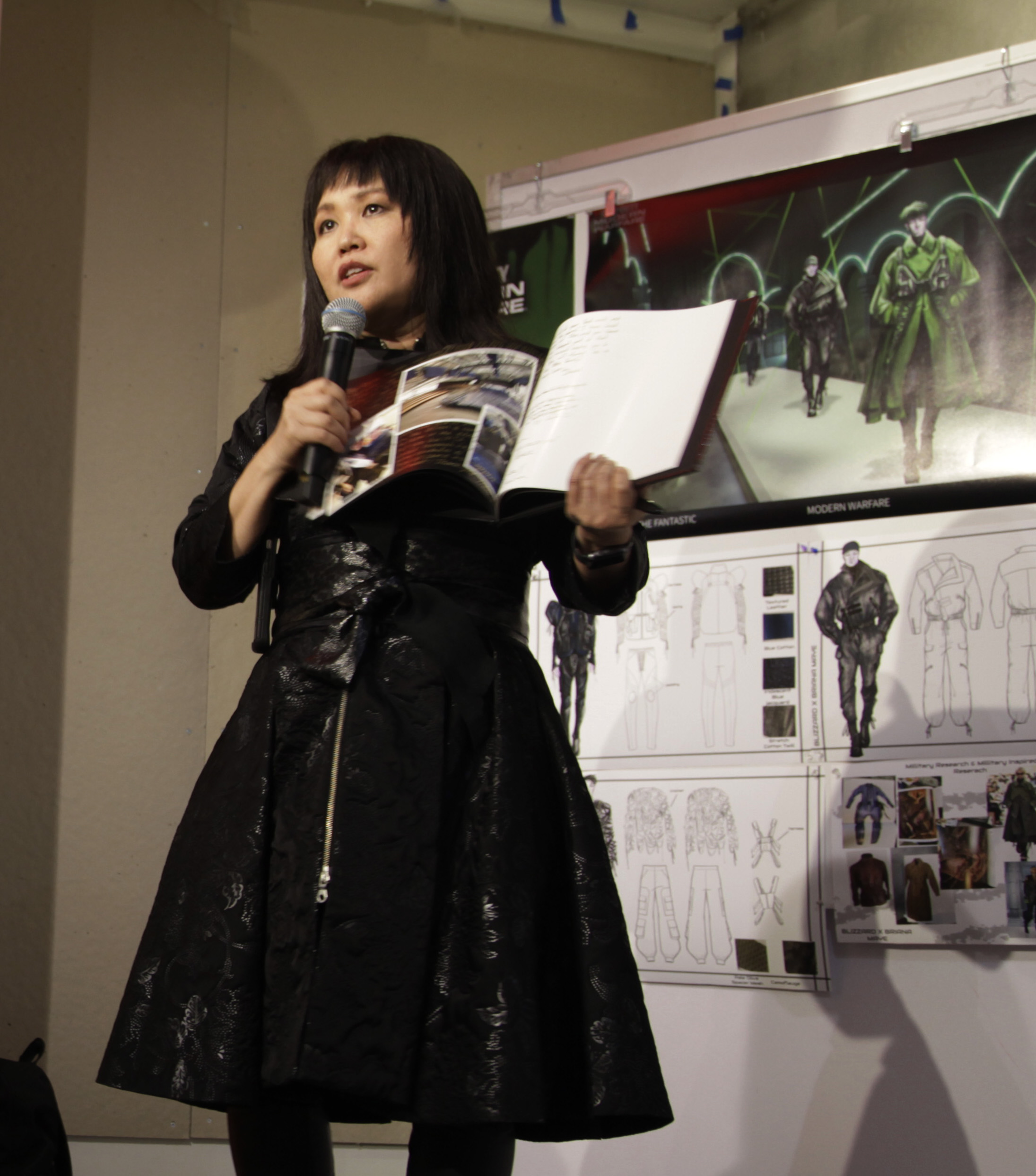 One of those students was Andrea de Anda, who hails from Mexicali in Baja California. De Anda was eager to explore this artistic sandbox that was entirely new to her. “I'm not into games,” she admits, “but I was really interested in the idea of this collaboration. I think this is going to be the future of fashion. Most of the runways are going to be digital and we're already seeing a lot of brands actually selling their clothing in video games. I was really excited to give it a try.” De Anda also felt empowered by the freedom of a digital-first project. “With this project, we had more liberty because we knew that we're not going to physically make the garment, so it could be more complicated and more over the top. I had a lot of fun on this.” 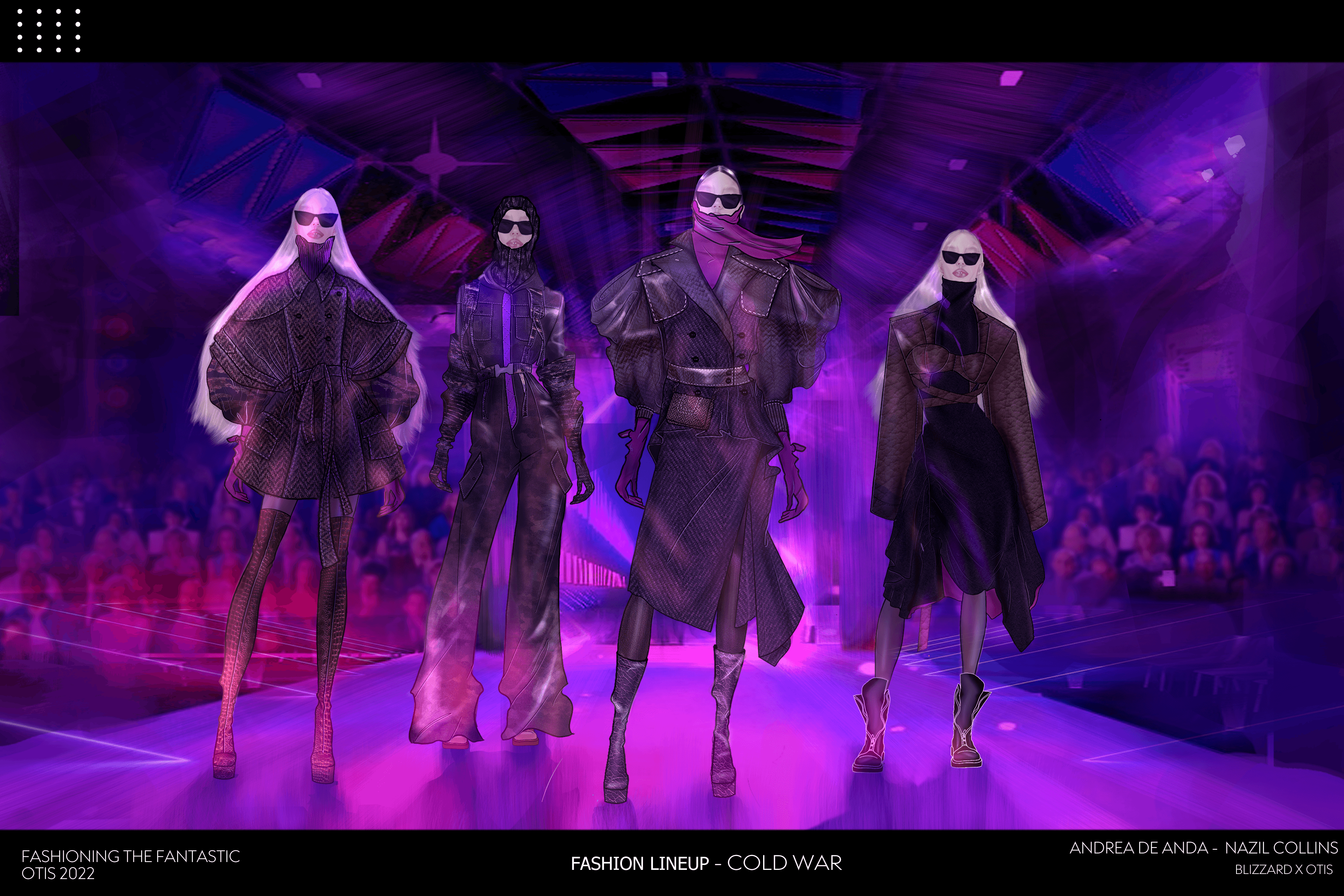 Fellow student and New Mexico native Sabrina Thomas could only count a few childhood rounds of Mario Kart as the extent of her gaming experience, but found her footing on the project through Infinite Warfare and her deep love of sci-fi films like Mad Max and Dune. “I started by thinking about how I could incorporate my own passions into this,” she says. “A lot of my peers love ready-to-wear and more functional clothing, but I'm very into costumes and grandiose, avant-garde design. I enjoyed that this project let me design something I don't even really know how I’d construct!” 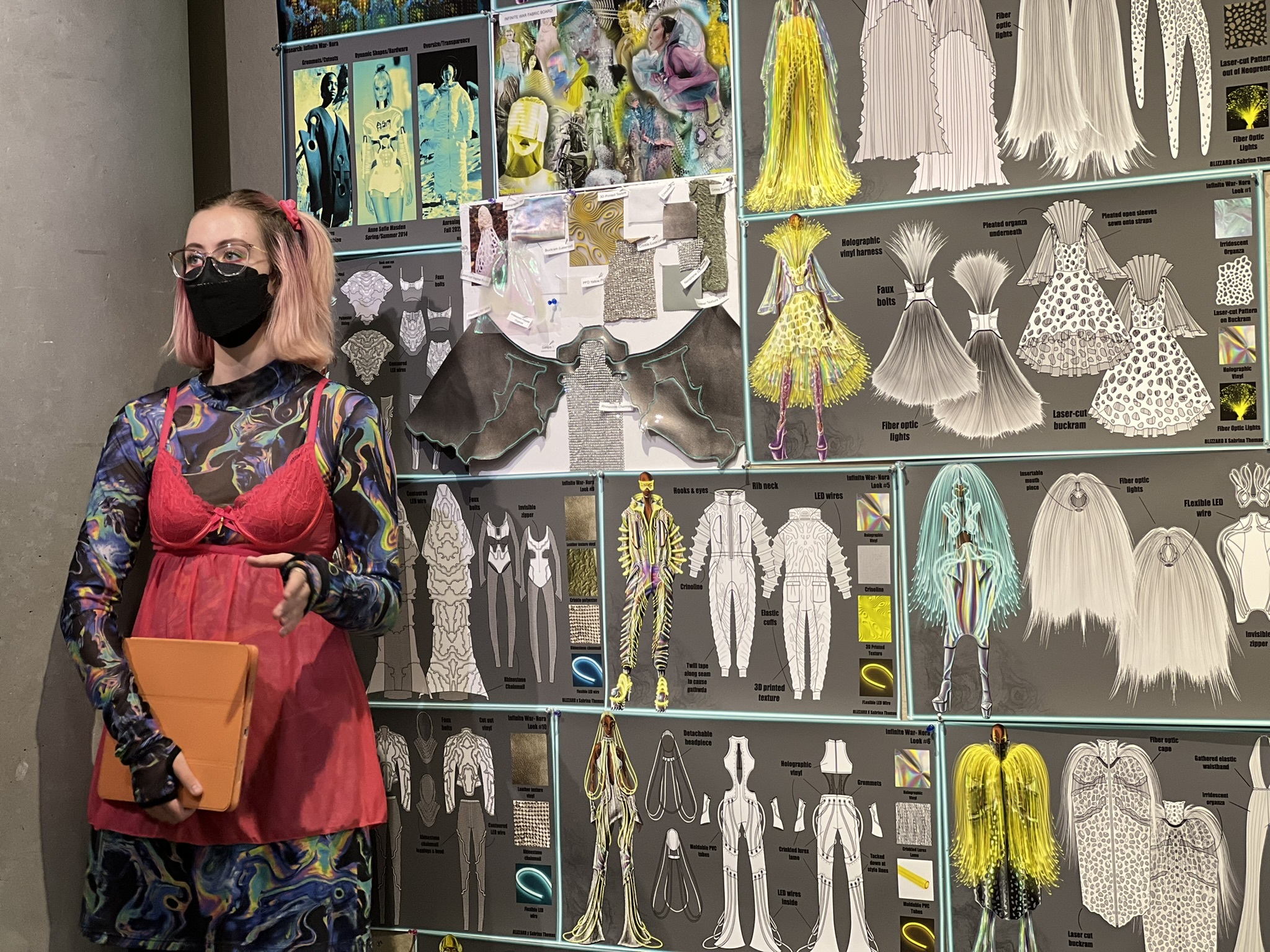 Thomas also appreciated the hands-on guidance provided by the Activision Blizzard mentors. “Tim took the time to come in and visit with us,” she says. “He really educated us about how games in general are designed and made, and I had no idea that you could use a lot of the same technology for fashion to create the garments digitally. It really has broadened my perspective and made me think this is an opportunity that I could go for.”

Wirt Li came to Otis from China, and unlike some of her peers, brought a deeply entrenched love of gaming to the assignment. “I got my first PSP [Sony PlayStation Portable] when I was in kindergarten,” she says. “I spend a lot of my time on gaming.” 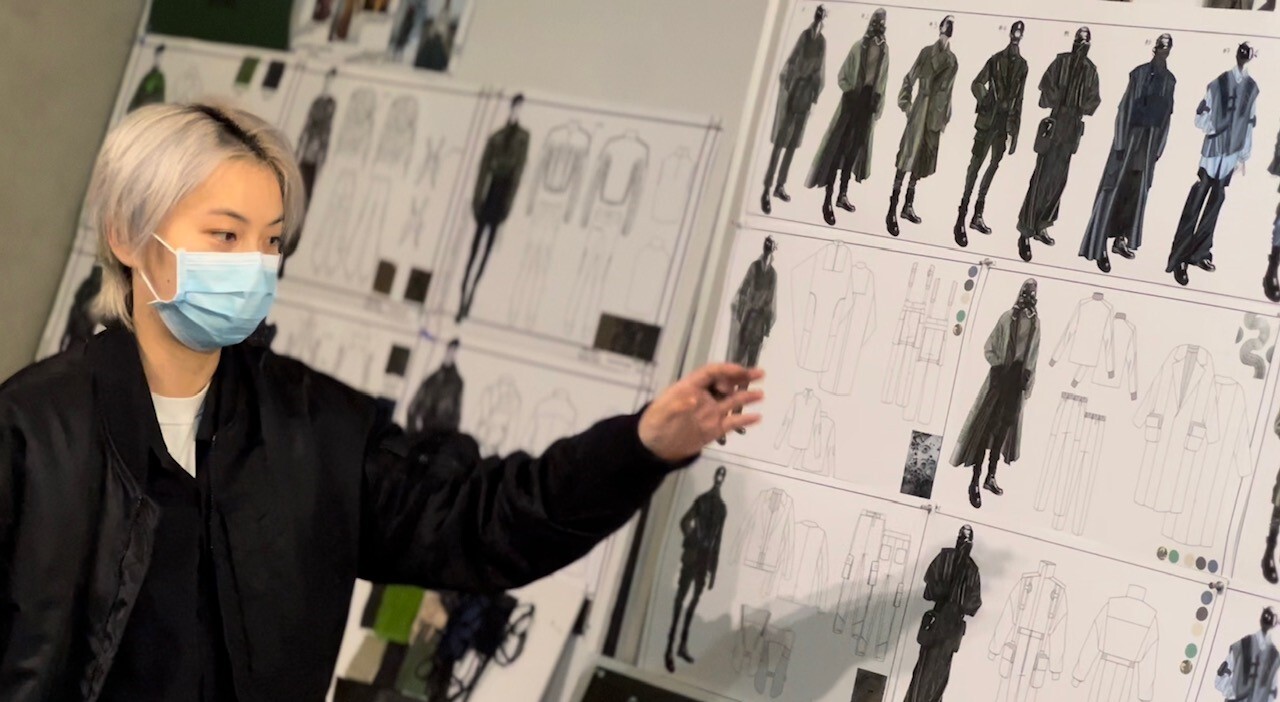 As a menswear designer who prefers functional, structured clothing in muted colors (“Unless I was pushed I would never use neon green!”), Wirt immediately jumped on Modern Warfare and found that even with her gaming background there was still a lot for her to take away from this experience. “Tim and Allyson really made me think about 3D modeling, and how it can be used outside of gaming,” she says. “I really appreciated having their perspective from outside of the fashion world.” 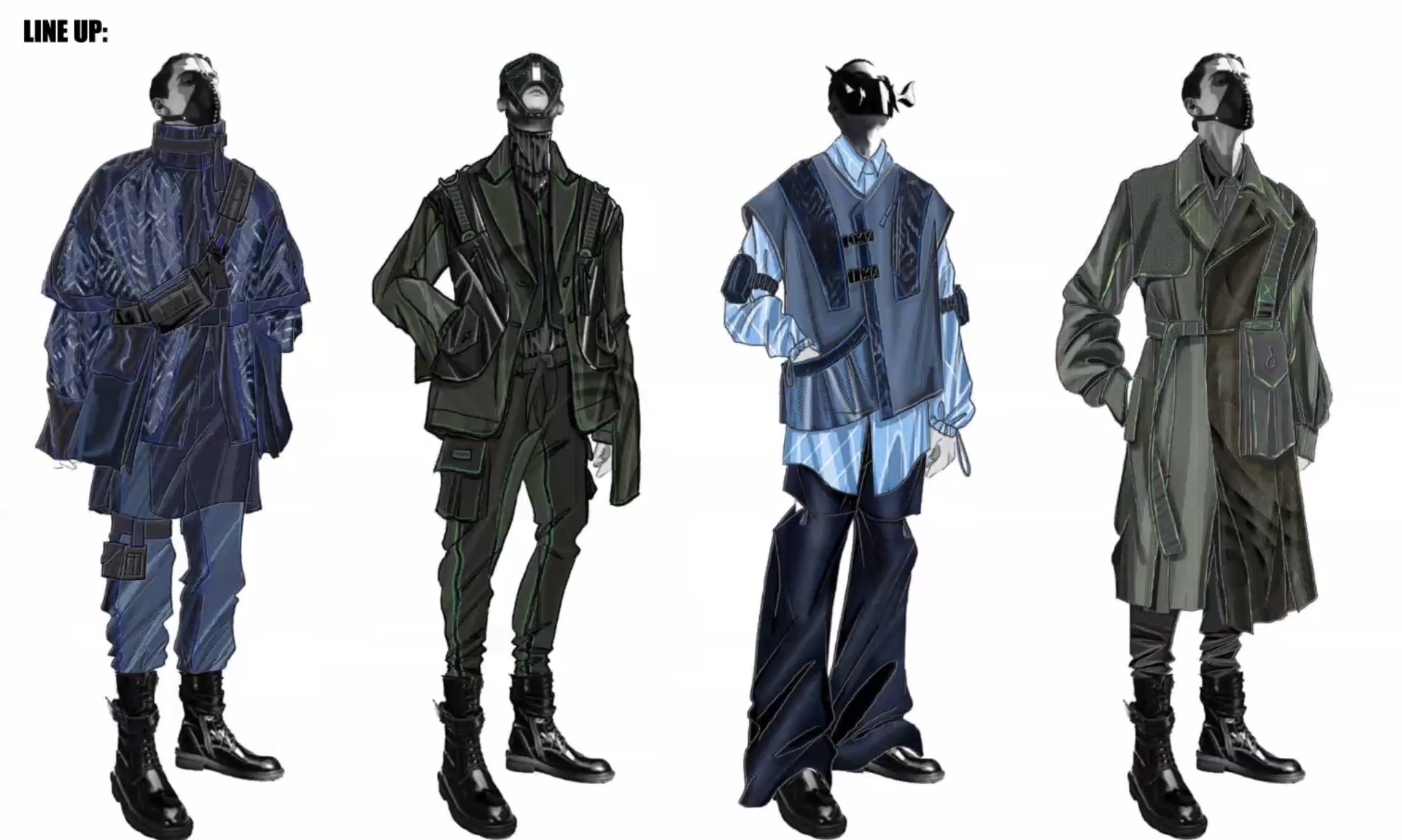 THIS IS THE FUTURE

Whether it’s in conversation with Hirschhorn, Zeleznik, and Sjoenell from leadership positions, McGrath and Smyth from a mentorship perspective, or students like de Anda, Thomas, and Li, there is one constant refrain: “This is the future.”

“Our Digital Department is now our biggest department,” says Hirschhorn. “Next year, we’re going to divide it into two: Digital Animation and Video Game Design. We’re all in on the opportunities in video games and video game design.” 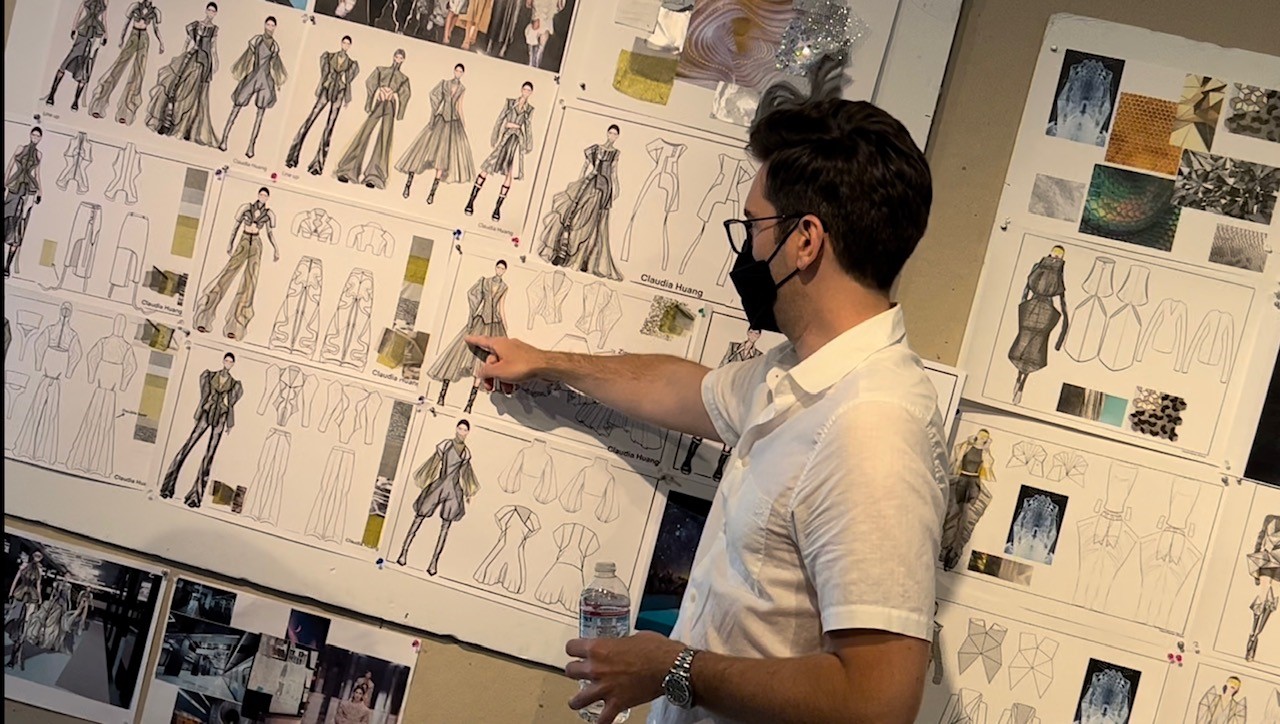 For Sjoenell, the experience proved both validating and inspiring for the future. “We are at an exciting, quickly accelerating time right now when lines are blurring between the virtual and real worlds,” he says. “Fashion, culture, and social structures are equally important to people’s identities in both worlds. Avatars give them an opportunity to experiment with who they could be and what they could look like. That’s different from this world where our avatars pick us.”

Adds Hirschhorn, “There are three themes that are really important to us. One, having a diverse student body. Two is having a digital curriculum where we connect students to digital talent and opportunities. Three is creative autonomy, so our graduating students can feel confident and naturally assume roles and begin their careers. This is what Otis is all about, and it’s why this program with Activision Blizzard was so exciting. Hopefully we’ll have more!”