From ESPN to Esports - Changing the Game

With serendipitously parallel career paths to a shared vision for the future of professional gaming, Snowden and Porter are helping to literally change the game

You could say that Stephanie Snowden’s path from ESPN to Esports was destiny. Or, more specifically, Destiny.

“I’ve always loved games, but I took a bit of a hiatus during college,” says Snowden. “Then I graduated and moved to Connecticut to work at ESPN. I was basically living in the woods by myself – there’s not a lot going on in that part of the world for a 22-year-old. One day I decided to go out and get the Destiny PS4 bundle. I became absolutely hooked on it. That game brought me back.”

Snowden is living proof of the overlap between gaming and traditional sports. An avid sports fan growing up, Snowden dreamed of one day working for pro sports giant ESPN. While she earned her credentials producing live game coverage and original programming there, she started to realize just how closely fans of basketball, football, baseball, and hockey related to those playing Call of Duty and Overwatch.

“While I was there, ESPN started to invest more heavily into Esports,” explains Snowden. “People knew I was a gamer, so I found myself getting pulled into a lot of those projects and conversations. I began to realize just how big the overlap was between the casual gamer and the sports fan – there was this audience that I felt like I had already been creating content for, and it was now so much bigger, thanks to Esports.”

Snowden has since moved on from her role within the Esports world, but as someone who, by her own admission, thrives on “adrenaline in the work environment,” she has found brand new avenues of excitement as Director of Communications for Call of Duty developer, Infinity Ward (IW). “Coming into the studio ahead of a release year has been an entirely new rush for me,” says Snowden. “Even as a longtime fan of the COD franchise, it has been wild to wrap my head around the massive scope of work that goes into making our new game, Modern Warfare II. Working at a game developer is humbling, as the level of innovation and talent at Infinity Ward drives me to push my creative boundaries every day.”

Snowden’s impact on the Call of Duty League (CDL) and the Overwatch League (OWL), meanwhile, remain deep and long-lasting. One of her early initiatives when she was named Director of Broadcast Talent for the leagues was to make Esports more universal and welcoming. When Snowden first became involved, it struck her that Call of Duty League’s initial talent roster leaned more heavily towards white and male, and she knew immediately that it needed to expand and change.

“I felt we needed to do a better job of making our broadcast and Esports feel more accessible and feel more representative of what the player experience is,’” says Snowden. Grappling with the question ‘How does one encourage meaningful inclusion and diversity, without tokenism, to create the absolute best broadcast product possible?’, Snowden wanted to recruit and support diverse talent at a high-level, by providing additional opportunities. She adds, “Esports will continue growing and evolving, but I’m happy with my accomplishments and the relationships I’ve made along the way.”

And, as fate would have it, Snowden left things in the hands of someone who had a similar ESPN pedigree and a love for the Esports experience.

As a collegiate volleyball player, Allyson Porter also dreamed of a career where she could tap into her love of sports, and, like Snowden, turned her sights on one of the most iconic sports broadcast companies in the world – although her path to ESPN was, well, a little unconventional.

“When I moved out to LA, it just happened that the show Sports Nation also moved their production to LA, so I would go to tapings and sit in the live audience and figure out who was important,” says Porter “I did that for about a year, and I got to know people on the staff. I was known as the ‘girl who was always in the stands.’ I literally got my job at ESPN because I just showed up every single day!” Although she laughs at the memory now, a resume left with a show producer did, eventually, lead to her producing original ESPN programming.  “My first day in the studio, the camera men were like, ‘Hey, you’re that girl that was always in the stands!’ And I was like, ‘Oh, that’s really embarrassing.’ But it was basically a dream come true.”

Porter and Snowden initially connected at ESPN, and when Snowden made the leap to Esports, she immediately understood it as something Porter would respond to just as enthusiastically as she had.

“I had never watched professional gaming before, my world was flipped upside down,” says Porter. “But I thought it was just so entertaining. And I loved it!” Not only did she see parallels to more established pro sports, but Porter also began to celebrate what makes Esports unique, in its own right. “It felt a little like the WWE to me - It’s so entertaining, and the players are such characters.” 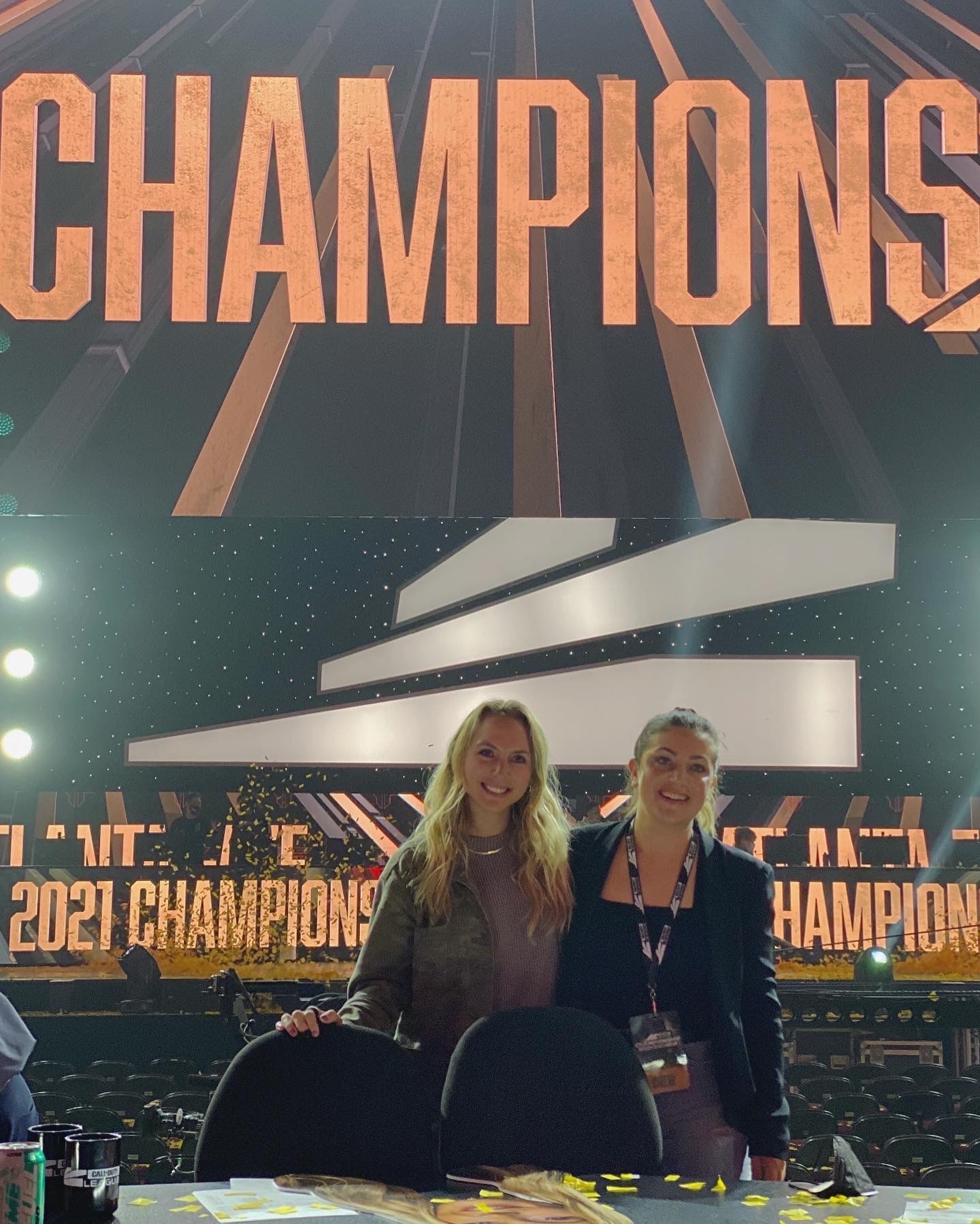 Porter and Snowden teaming up for Esports

Porter’s efforts to make sure those characters better reflect the whole of Call of Duty and Overwatch fan bases are still ongoing in her role as Senior Manager, Talent, with Snowden confident that Porter will continue innovating on all levels when it comes to broadcast talent. Porter graciously acknowledges the “strong foundation” left for her when Snowden passed the baton before taking her talents to Infinity Ward.

“[Stephanie] made the games and the broadcasts look a little bit different because she pushed to avoid tokenism and not hire, say, a girl just because she’s a girl and then put her in a place where she won’t succeed,” says Porter. “You want to give them the opportunity to feel confident and welcoming.” Part of this effort included hiring Ally “Allycxt” Parker as Call of Duty League’s first woman analyst.

It’s a drive and focus that continues unabated in her new role at Infinity Ward, which Snowden credits to top-down levels of support. “There is a robust cultural roadmap in place at IW that I look forward to driving,” says Snowden. “As a leader at the studio, I will continue to advocate for inclusivity and accessibility in gaming and am hopeful my experiences with our fans in the Esports world will translate to championing diversity throughout the broader Call of Duty community.”

And, of course, sports will once again play a big part. “I have enjoyed getting to know all the creative and unique personalities at the studio, and especially throughout my time in the IW Women’s Network. It’s been an exciting time meeting everyone, and I plan to get the IW golf club playing together again later this year!”

When they look back at their respective – and interlocking – paths, both Snowden and Porter express appreciation for being in the position to shape leagues that – unlike in their previous experiences – don’t already have decades upon decades of history behind them.

“It’s a whole world that hasn’t been tapped for me,” says Porter. “And it’s so much bigger than I thought.”