Activision Blizzard’s Asian & Pacific Islander (API) Network wasn’t just looking for a way to acknowledge API Heritage Month - they wanted to make the theme of “Together We Rise” feel more meaningful and real to its members and allies across the company.

“Our mission is to provide our API employees with a community to celebrate their identities, support one another, grow in their careers, and also improve representation in the games we make,” says Blizzard Senior Financial Analyst and event host, Faustine Chow. “Role modeling and illuminating the journeys of people from the community who’ve successfully broken through in their fields can offer new perspectives and even inspire one to change.”

In that regard, to celebrate Asian-American & Pacific Islander Heritage Month, the API Network invited a panel of guest speakers from the entertainment community -  actor and producer Erika Ishii (Call of Duty: Black Ops Cold War, World of Warcraft: Shadowlands), actor Remy Hii (Crazy Rich Asians, Spider-Man: Far From Home), actor Chris Pang (Crazy Rich Asians, Palm Springs), and actor Desmond Chiam (The Falcon and the Winter Soldier) – to discuss their career journeys. So, naturally, the conversation began…with all of them praising the greatness of video games.

“I think we’re all gamers, right?” asked Pang, who kicked off a deluge of enthusiasm. “I’ve been playing Blizzard games since I was about 10, so it’s awesome to be here with you guys,” offered Hii, to which Ishii added, “I’ve been working with Blizzard in so many capacities for over a decade now – but I’m used to doing the interviewing at Cons, and now I’m being interviewed, that’s wild.” Finally, Chiam admitted to “hundreds of hours” spent on World of Warcraft. “Like everyone else, games are a huge part of my history. I grew up in a pretty strict household – but I had a PC in my room and video games were the one thing my parents couldn’t control. I’d get up at 4 AM to play and they didn’t know.” 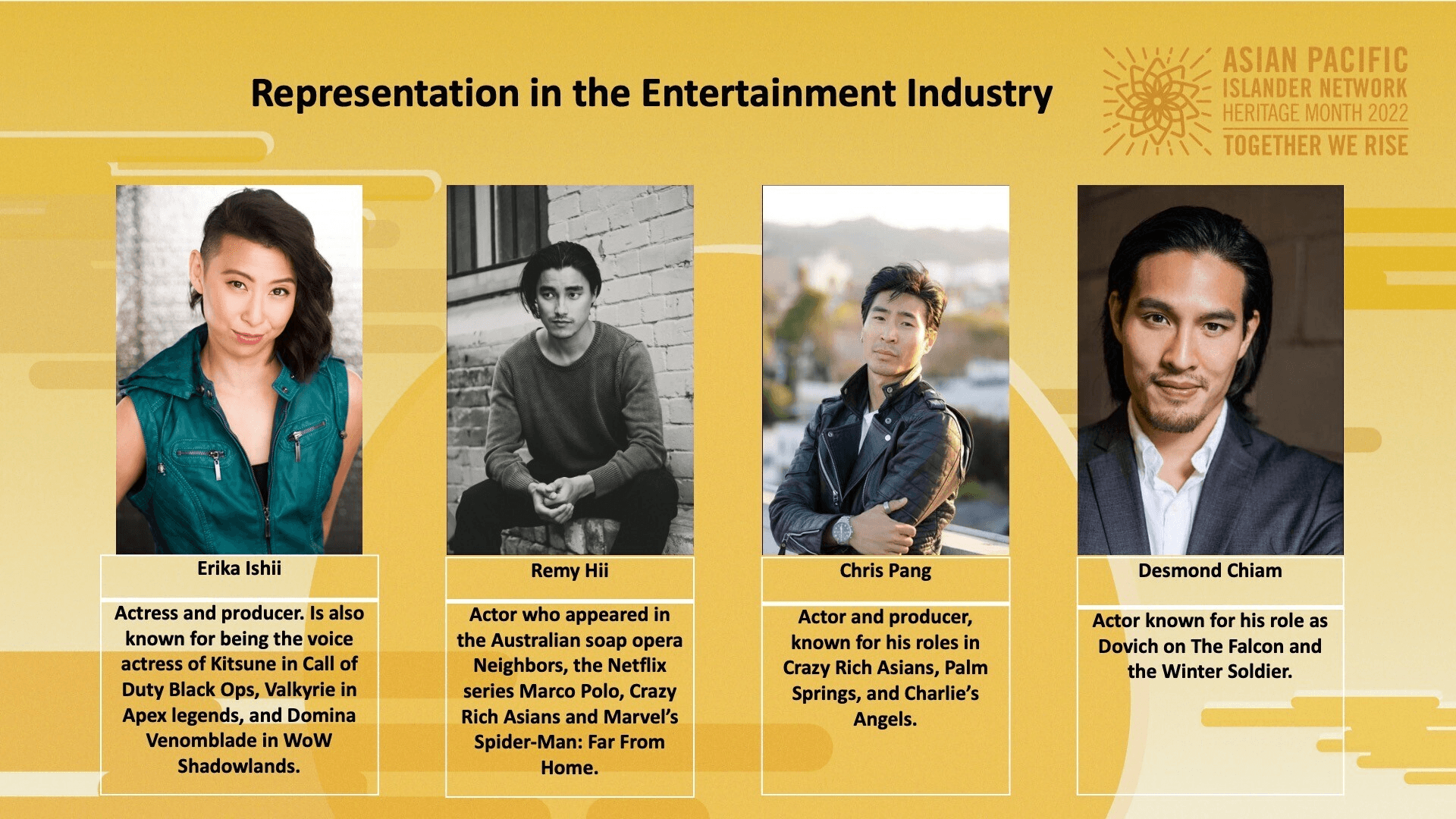 The distinguished panelists who brought valuable insights to the discussion

With enthusiasm high, the group began to reveal their shared experiences, their unique individual challenges, and how, in the words of Chow, their communities can be “heard, represented, and celebrated” in more meaningful and genuine ways.

The 2018 hit film Crazy Rich Asians proved to be an immediate touchstone for the group - and not just because it features performances by both Hii and Pang. The movie not only elevated the conversation around what true representation in pop culture means, but it also helped bring that sense of connection well beyond what anyone involved ever anticipated.

“Growing up in Australia in the 90s, there were not many Asian actors, and I never got to see any of those faces on screen,” said Hii. “When I first started acting, having that knowledge that you have the odds stacked against you – it made me want to try even harder to be part of a wave that could at least in some ways break a few barriers down and open things up.” Pang shared a similar experience growing up, adding that “you’d never feel connected to the heroes of the story, and that does something to you in your formative years. A lot of motivation comes from that – if I can effect change in a way that one little kid growing up doesn’t have to feel that way, I think I’ve done my job.”

Or, you know, if a once iconic actor decides to re-start his dormant career because of your movie. “You guys made Short Round come back to acting!” exclaimed Ishii, referring to actor Ke Huy Quan, who appeared in 80s classics Indiana Jones and the Temple of Doom, and The Goonies, and who has publicly credited Crazy Rich Asians for sparking a renewed interest in reviving his career.  “I met Ke Huy Quan at a party last night and I was freaking out, thinking ‘what am I going to say to him?’” said Hii. “And he ran up to me like, ‘You guys changed everything for me!’ I was like ‘Stop it, you don’t get to ‘fanboy’ right now. Just be the pillar of the community that you are.’” 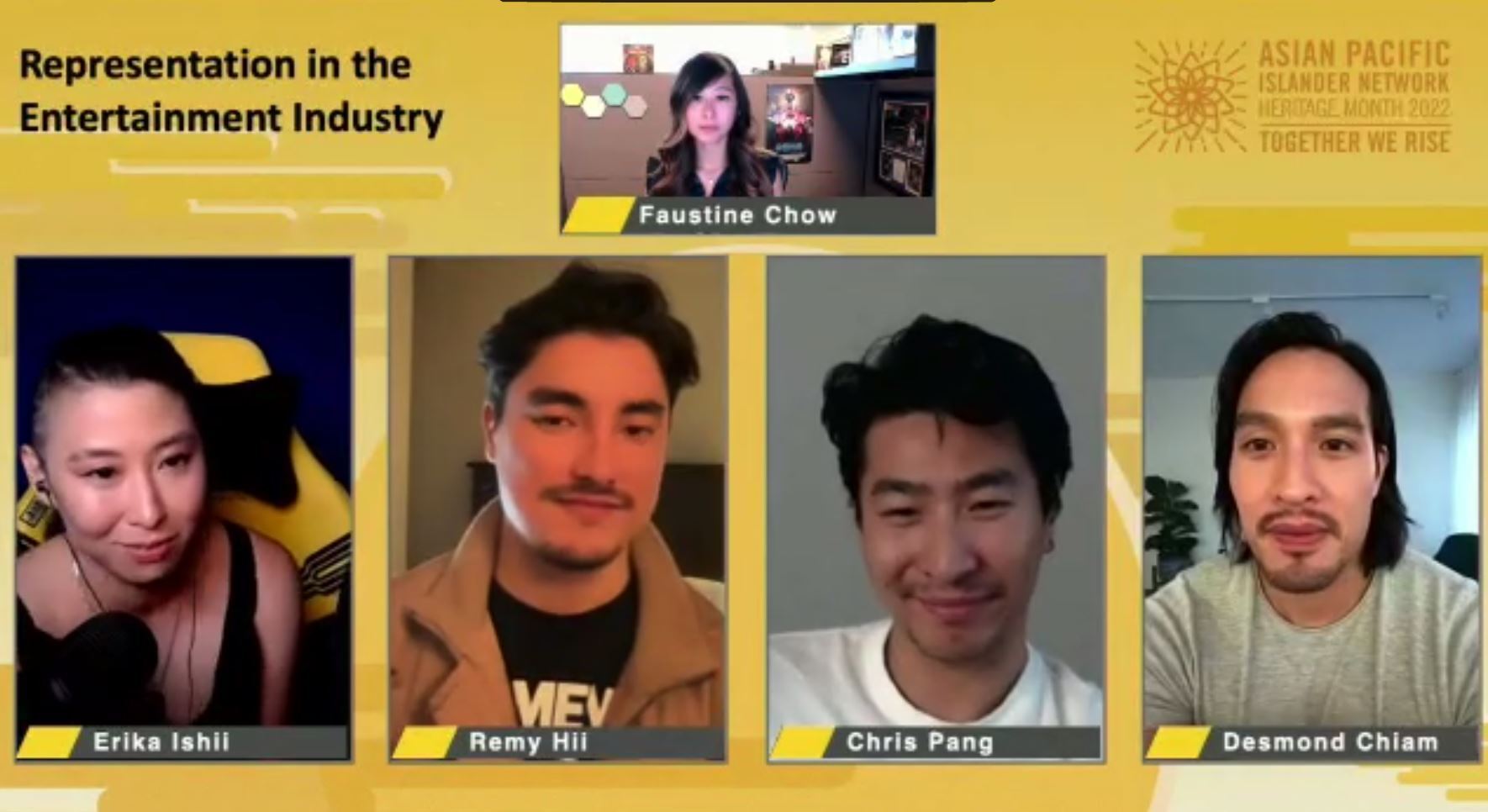 The panel in action

All kidding aside, all four admit to a feeling that – at last – things might be changing in terms of how Asian cultures are represented on film and on television. “Chris and I work on scripts together sometimes, and early on when we were writing, we’d have a moment like, ‘Can we put two Asians in this?’” said Hii. “We’d only put one Asian in it because we knew we couldn’t get it made otherwise. I think that was the biggest challenge, overcoming the subversive psychology of that.”

Ishii added, “Hollywood still has a very narrow view of what an Asian should look like. I was terrified for the longest time of getting the sides of my head shaved because I could no longer go out for the bulk of the roles that I was auditioning for, which was like ‘Sweet Asian Girl’ or ‘Nerdy Asian Girl’. I also go out for non-binary or gender fluid roles, and they’ll be like, ‘You can be queer gender weird or you can be Asian weird, but you can’t really be both.’ But it is changing.”

According to Chiam, Asian actors are typically offered one of two options: A character that fits in one very narrow box, or a character that has to be every box. “They try and check off all the boxes in one,” he explained. “The character is Asian and gay and this and that…they just try and tick them all off the list in one go.”

Throughout the conversation, all four guests kept coming back to one central idea: Pop culture can exacerbate stereotypes, but it can also be an extremely powerful force for change. And our current culture and technology is taking the creative power away from an inaccessible few and putting it in the hands of people everywhere.

“I fully believe that Crazy Rich Asians would not have happened without the success of Asians online,” offered Ishii. “There are so many of us who started telling our own stories online. I was getting the ability to play characters I would never be offered because I was writing them. And with voiceover, I can be whoever I want - which rules.” Pang agreed, saying, “What I’m doing is I’m finding stories and I’m producing my own things. I’m not waiting anymore for people at the top to be like, ‘Hey, I’ve got this role that requires someone who looks exactly like Chris, is Chris’s age, and that Chris could play.’ I’m just going to do my own stuff. Be a storyteller.”

And being one’s own storyteller is now easier than it’s ever been, explained Hii. “The people making the decisions used to be so inaccessible, but now it’s becoming more of a user-based ownership. And I think that’s where we’re headed.”

As the floor opened to the event attendees, one question in particular brought the whole conversation full circle: What can we in the video game industry do to help improve API representation?

“When you look at the people making stuff in the video game space, I think it’s generally more diverse across the board than Hollywood, which is an older industry,” said Chaim. “With games being a younger industry, you’re a little more agile in that regard.” To which Pang added, “It’s also about extending opportunities and mentorship – we need more people in leadership positions, and we need those people to look out and see where talent has gone unserved and be able to pull each other up.”

It was clear to the panel that “Together We Rise” is more than just a theme or slogan - it represents a sincere path forward for all underrepresented groups. For Erika, Remy, Chris, and Desmond, telling their stories, their way, has real power.

“Have the courage to speak up,” said Hii. “A lot of racism is unintentional. It’s about education. Most of the stereotypes I learned were from movies and games. We’re all now fortunate to be in the position to effect change.”