A Passion for Inclusion and Acceptance

He had dreamed of this day for as long as he could remember. Adrian Ledda had finally fulfilled a promise he made to himself as a kid, while watching his mom mine for extra One-Up lives in Super Mario World -  that he would one day work in the video game industry. After day one at his first studio job, he clocked out, went home…

…and immediately thought he’d just made the biggest mistake of his life.

“I started off as a UX engineer and programmer at Budcat Creations, and I was terrible,” says Ledda, allowing himself to laugh at the memory now. “I didn’t know what to do, I was scared. The first night, after my first day at work, I thought to myself, ‘Wow, I made the wrong choice.’” 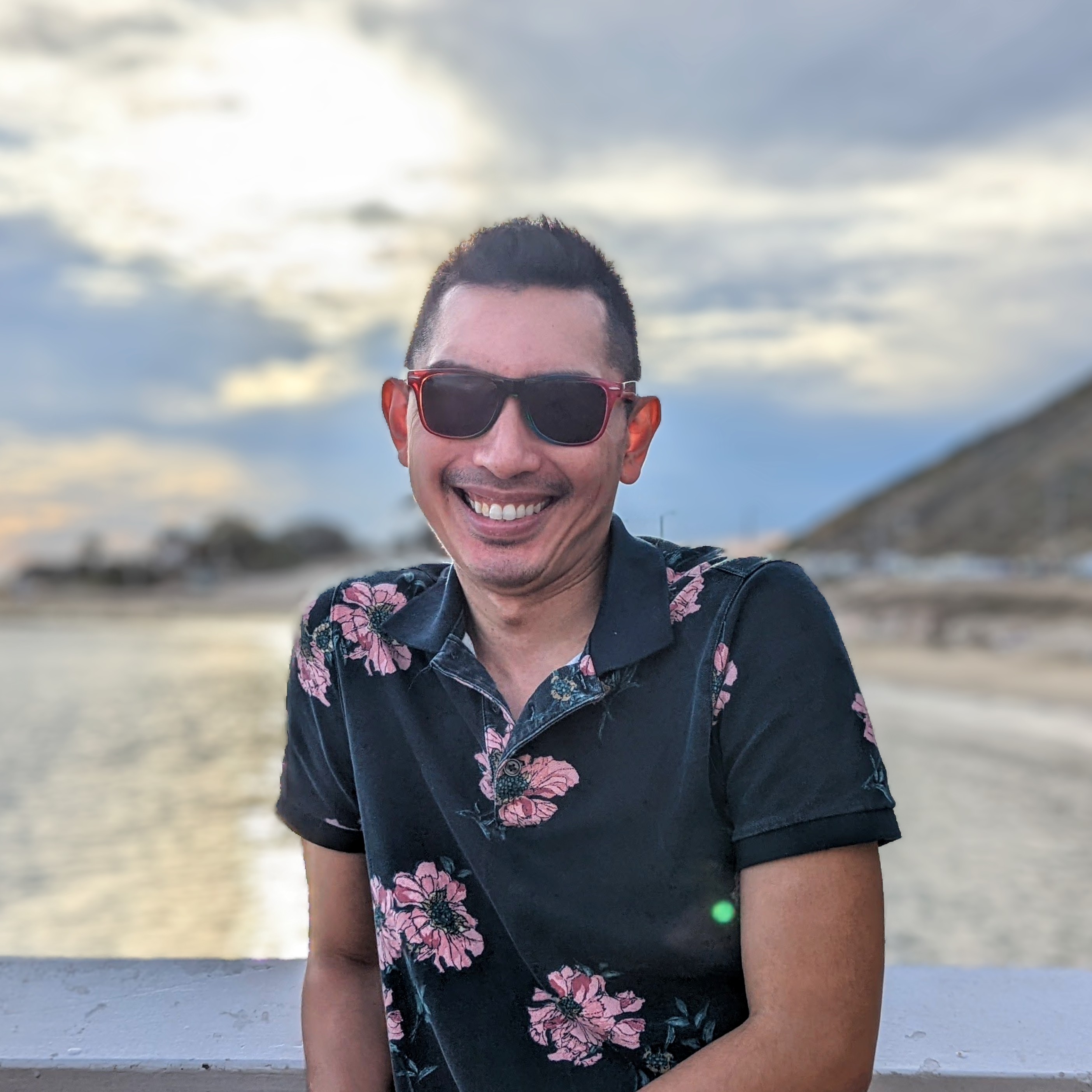 The imposter syndrome Ledda might have felt that first day, would eventually be joined by more deeply personal questions about his identity – and while these challenges would make him question what he thought he knew about the game industry, they would also, eventually, lead him to an incredible opportunity to help ensure that games would be more welcoming and accessible for all.

Born and raised in Chicago, Ledda took to games early, and knew he wanted to do something in the gaming industry, even if he had no idea what that meant at the time.

“When I got into Northwestern University, I didn’t know what to do,” says Ledda. “They didn’t have a games program, and I would talk to my professors there and even some of my peers and they all considered gaming as a pastime. A hobby, not a career. So even at that level I didn’t quite know what to do.”

Upon graduation, Ledda got a job at Budcat Creations working on Guitar Hero, shortly before the company was acquired by Activision. Despite that rough first day, Ledda was inspired to keep going because of something that would become a theme in his career journey. “I think it was the passion of the people on the teams that brought me back, and the realization that the game industry is not always – and no industry is – what we imagine it to be,” Ledda explains. “I remember thinking that I would never get good at this, that I would never learn, but I was supported by people on the teams who helped me learn the tools, the coding, and I grew in confidence, and I learned to love what I did.”

The power of a shared passion to lift people up was something that would stay with Ledda as he moved on to work at Toys for Bob (a subsidiary of Activision), where he would be a part of another tough lesson that taught him something important for his current role as Senior Manager, Inclusive Game Design, at Activision Blizzard. “The Spyro Reignited Trilogy didn’t ship with subtitles, and we didn’t understand the need for accessibility,” says Ledda. “We learned that the hard way, and in hindsight I’m glad that we did learn that because it allowed us to take that lesson and correct it thanks to the dedication of a lot of people at Toys for Bob.” He adds, “But we didn’t stop there. We developed accessibility training and implemented those ideas into the next title we worked on, Crash Bandicoot 4. We also worked across Activision, Blizzard, and King to help spread education on accessibility for their own teams.”

Just as he was gaining confidence in his professional abilities at Budcat, Ledda would be faced with another challenge that – though intensely difficult at the time – would further fuel his commitment to creating environments where everyone felt welcomed and celebrated. 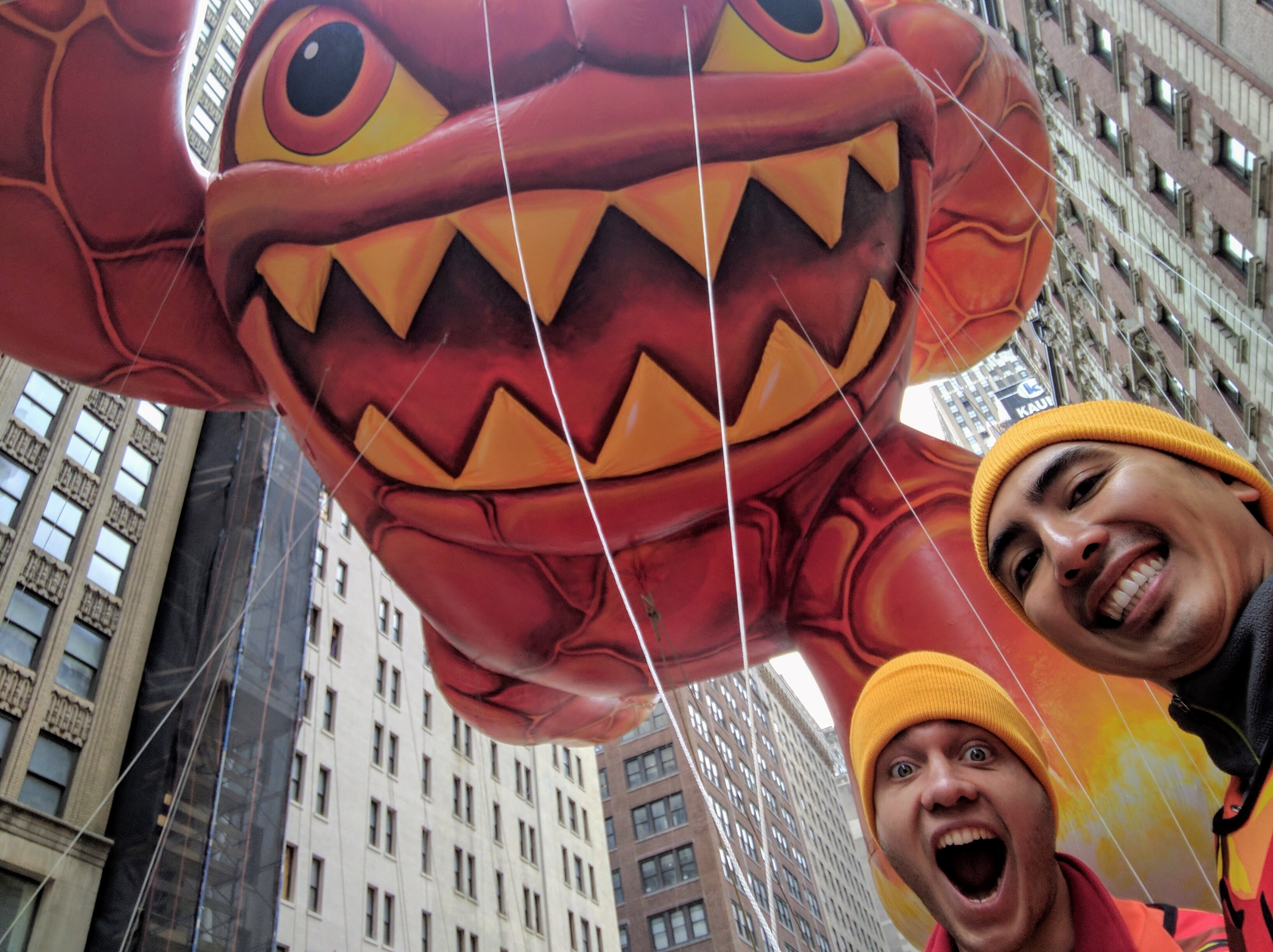 “When I initially started, I was closeted,” says Ledda. “I had come to terms that I was LGBTQ+, but I thought for a while that it had nothing to do with my core identity and I’d rather not let other people know.” However, during a casual conversation about weekend plans with a co-worker, Ledda says he accidentally “outed” himself, which he felt led to a rift with some of his colleagues afterwards. This incredibly painful experience once again threw Ledda off his axis, forcing him to make a painful and difficult personal decision.

“I came to the conclusion that I had to choose between my professional self and my personal self,” says Ledda. “I chose that I was going to leave my LGBTQ identity at home, and I wouldn’t bring that to work. And it’s no one’s business, nor should it be.”

After moving to San Francisco and joining Toys for Bob, Ledda explains that he went through “another evolution” and realized that such difficult and isolating choices didn’t have to be made – and, more importantly, shouldn’t have to be made. After meeting his now-husband, Ledda found himself unable to even share fun stories about their weekends together with his co-workers and realized that fading into the background and saying nothing wasn’t doing anyone any good.

“I thought for a long time that I was hurting myself and I was hurting him,” says Ledda, still clearly wrestling with the memory. “And more importantly, I was hurting people around the community who needed to feel safe and be open about who they are.”

Ledda partnered with Toys for Bob’s HR department to organize a Pride Month celebration and planned to come out himself during the event. His initial trepidation faded “within a few seconds” when his colleagues began to open up about their own experiences. Energized, Ledda became active with employee network groups such as the LGBTQ+ and Differing Abilities Network to help foster and grow a sense of welcomeness and togetherness. 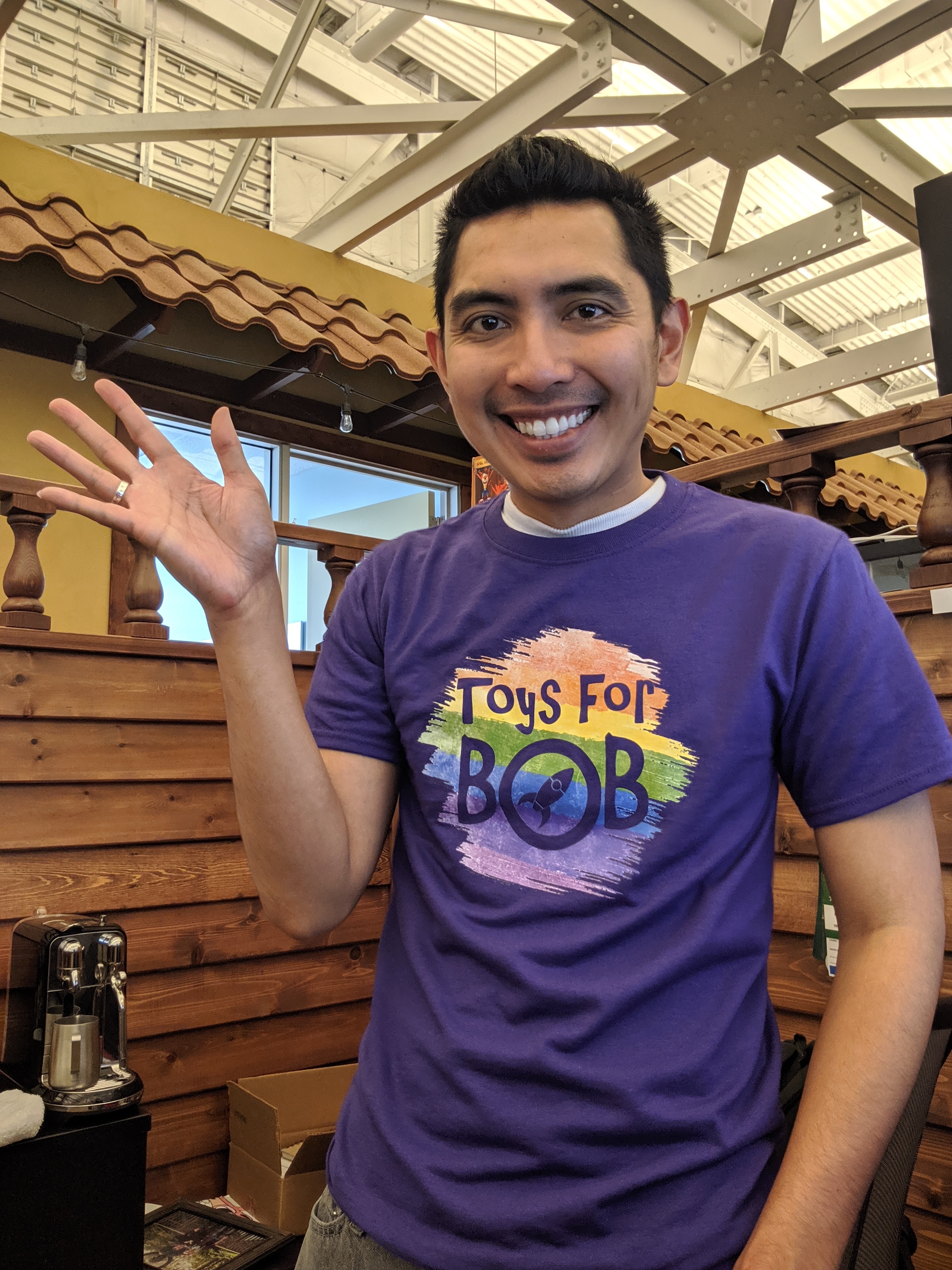 “Part of my choice to come out during Pride month along with the company, was that I felt it was important, not just for myself, but also for others who may be like me,” Ledda explains.

“And that experience was demonstrative of the power of coming out. Not only was I comfortable being myself, but I was helping to create a space where others could be themselves and feel loved and safe and protected.” He calls this experience “pivotal” for him, while also acknowledging that the decision to come out is deeply personal and difficult, and that creating safe spaces also means allowing people to celebrate at their own pace.

He may not have realized it at the time, but these growth moments and personal challenges were slowly shaping for him a career direction he never anticipated. Now, as Senior Manager, Inclusive Game Design, Ledda realizes he has a rare opportunity to bring together all his passions and hard-fought experiences for the betterment of everyone. Ledda has already been a driving force behind Activision Blizzard being one of the most engaged participants in a program called AbleGamers, sending over 70 developers through that organization’s accessible design certification program. And it was at Ledda’s urging that Activision Blizzard submitted to the Corporate Equality Index where it has received perfect scores in its first few years of participation.

“This was an unusual springboard for me, someone who was a designer and a programmer, to start getting engaged with DE&I topics,” says Ledda. “It’s challenging to go through these topics and talk about them. It’s highly emotional and highly personal.” But, as he discovered, it all ties back to what started him down the road in the first place, all those years ago, when the gaming industry was this mystery he was obsessed with uncovering.

“Inclusive game design is that wonderfully pure intersection of game development and diversity, equity, and inclusion. And the goals that they share are not that different from each other. It’s all about helping to create a sense of belonging,” says Ledda. “Inclusive game design is not going over and saying, ‘You have to do X, Y, Z.’ or ‘You have to change this or that…’ We don’t do that. We provide education, tools, forums for discussion, and consultation. We work with the company’s employee networks to find opportunities to improve.” 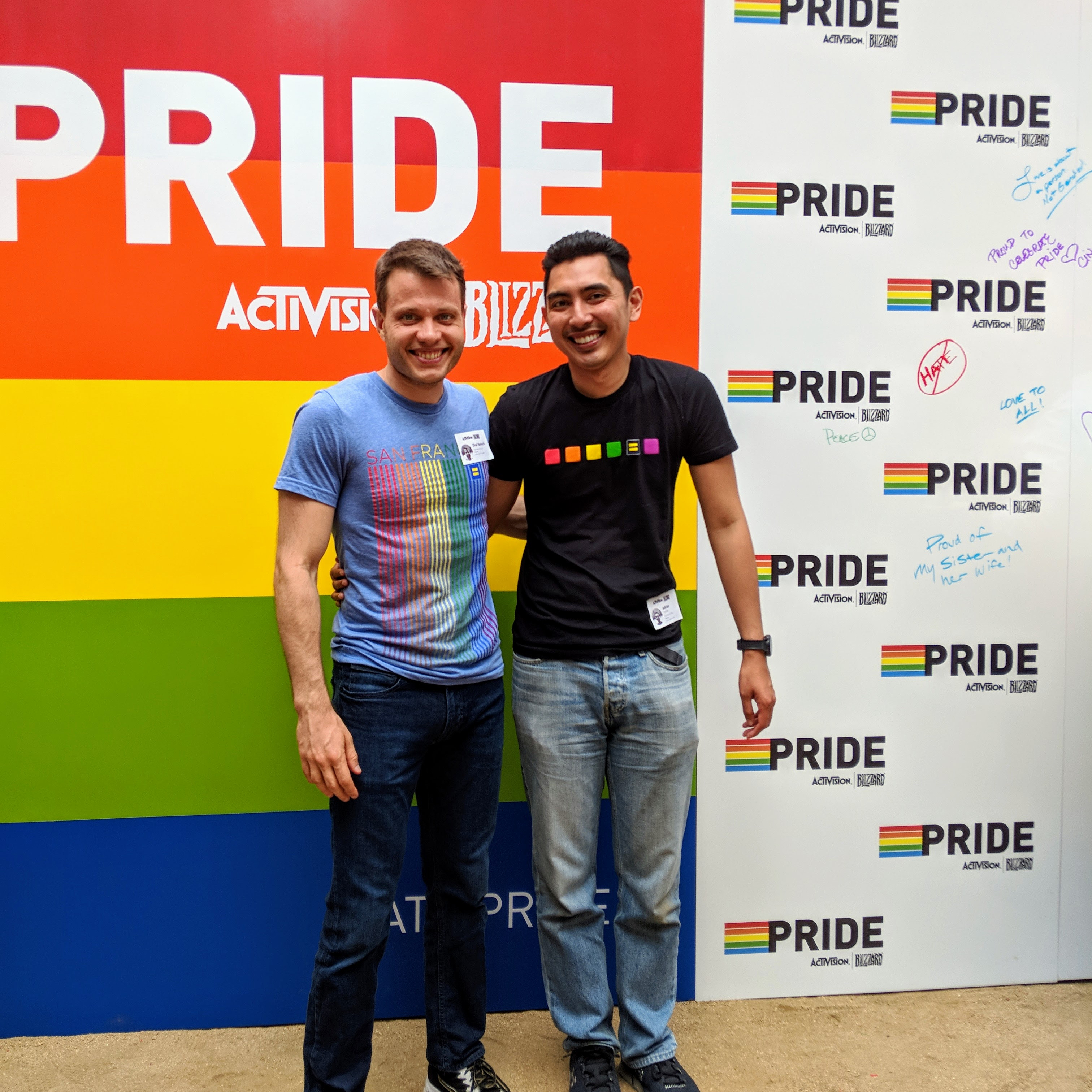 Adrian and his husband, Shai Barack, at Activision Blizzard’s PRIDE event in 2018

Despite his initial successes, Ledda knows that DE&I is a road that is continuously being paved, and it’s work that doesn’t have a clear finish line. “It’s scary. It’s a field I’m not sure is formally assigned or designated in the industry in general. Often companies rely on individual advocates to talk about DE&I. But Activision Blizzard is really investing in it, in ways that empower us all to do this better.” When he was announced in his new role, Ledda was asked where he saw inclusive game design in the next five to ten years – and admitted he hoped his job would no longer exist.  “I hope that it’s no longer a role or a separate responsibility.  It’s just a part of how we develop games and design experiences, and everyone understands that inclusive game design is a fundamental aspect of what we do in our games.”

The unease at not feeling welcomed or accepted is something that still clearly haunts Ledda, and it fuels his commitment to making sure that others don’t have to feel the fear, self-doubt, and anxiety that threatened to derail him, so early in his career. Not that it magically went away for him either. While at Toys for Bob, Ledda and his partner got married, but still didn’t feel entirely comfortable telling anyone. After casually mentioning that his “husband” was coming to visit him at work (“I accidentally came out again!”), he found further encouragement that – despite his early doubts – none of this had been a huge mistake. 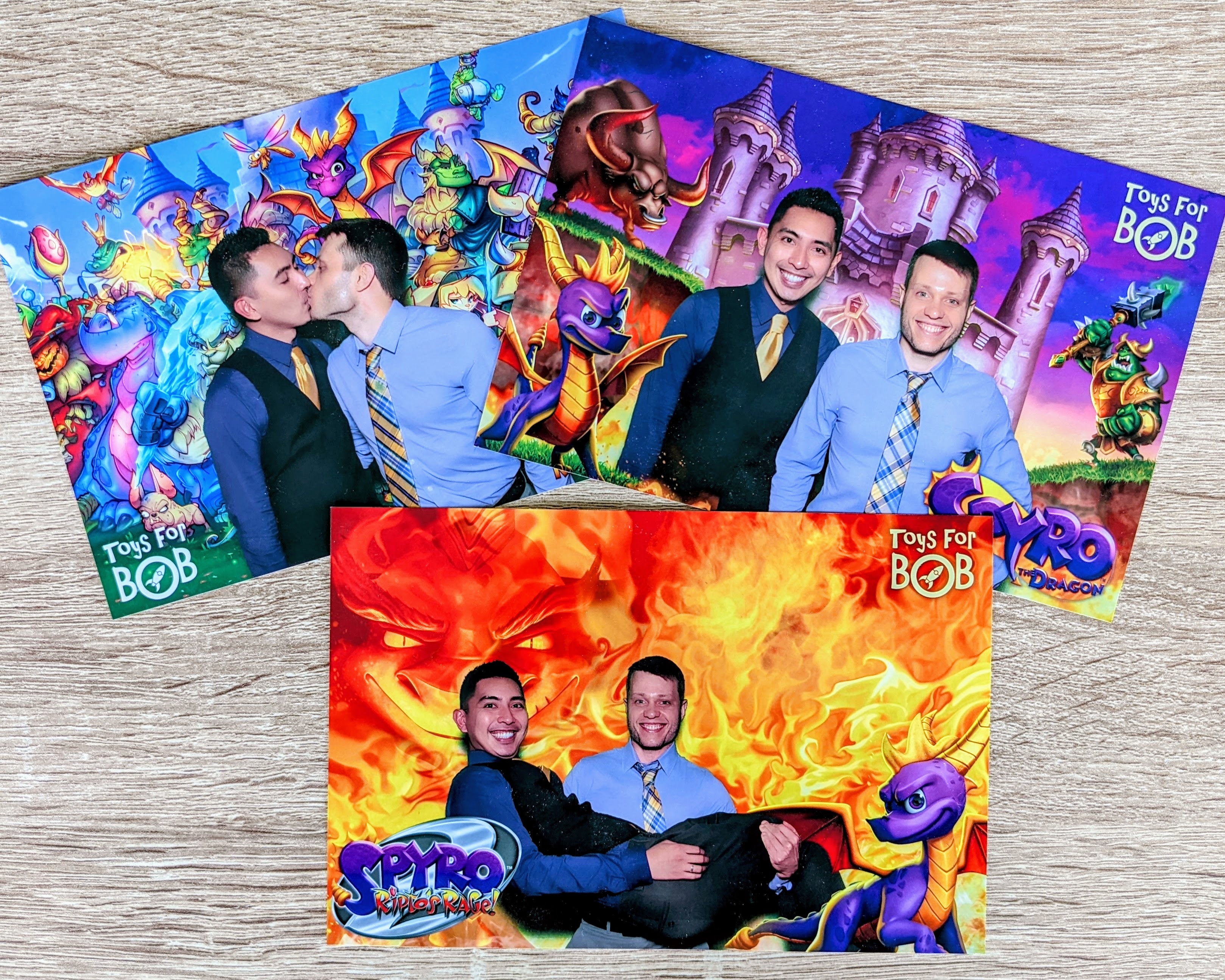 Adrian and his husband, celebrating Spyro

“There was a bell they would ring in the studio that signaled for everyone to gather on one side of the office,” says Ledda. “So, my husband and I went, and it turned out Toys for Bob created a surprise wedding party for us. I didn’t realize how much it meant to be recognized and celebrated and feel the legitimacy of being family. They celebrated it in a way that I hadn’t celebrated myself. They cared enough to do that – it was a small act, but it had an incredible impact.”

Ledda now aims to take that feeling and turn it into a mission.

“We don’t really hear about these wins. They’re hard to talk about because they’re personal, and sometimes it hurts the storyteller to have to tell them again. But it’s important. We have to celebrate the good. We have to fight back against these inequities, and those who want to keep this negativity in place. Because no one else will do it if we don’t.”