Nearly 15 years before Military Appreciation Month even existed, there was this understanding that not everyone who serves their country wears a uniform. In April 1984, President Ronald Reagan signed a proclamation setting aside May 23rd of that year as the first Military Spouse Day. A decade and a half later, through an effort spearheaded by Senator and veteran John McCain, Military Appreciation Month was formally adopted, and Military Spouse Appreciation Day (now observed on the Friday before Mother’s Day) was made a permanent part of the celebration. With still less than one-half of 1% of the U.S. population identified as active-duty personnel, the day serves as a much-needed spotlight on the sacrifices - and unique perspectives – of military families.

For Activision Talent Professional Lead, Ivan Perry, being a military spouse means continuing to serve, albeit in a different capacity - he’s an Air Force veteran from a military family, and his wife (also in the Air Force) is a Lieutenant Colonel currently working in the intelligence field at the Pentagon. For Blizzard Marketing Manager, Alex Hunter, being a “proud spouse of the Marine Corps” means finding new reserves of flexibility and adaptability as she navigates her own career, while appreciating that unexpected life changes can often lead to amazing new opportunities.

How did your paths lead you to Activision Blizzard?

IVAN PERRY: I was a captain when I got out of the Air Force. A lot of military officers get out and want to go into sales or marketing, because they are such great managers. I went to work for a company called Heidrick & Struggles, which is a retained executive search firm. The two people that hired me at my old firm - one was a former SEAL, and the other was Naval Intelligence, so we were kicking around dirt at the same time in the desert. But I was also close friends with Activision Senior Executive Recruiter Katie Traines, and I’m a gamer, so when this opportunity opened, I was excited to be part of it.

ALEX HUNTER:  I started out in traditional sports, working in the corporate sponsorships space for collegiate athletics at IMG. And then COVID hit and kind of blew up that industry and Esports is something I always wanted to get into. In the traditional sports world, Esports was new and growing, and I took the opportunity to change industries. I started off on the Overwatch consumer marketing team, which I loved - very fast paced and a really great team. Then, in December, I started at the partnerships team for Esports and I manage the corporate sponsorships for Overwatch League.

Obviously, being a “military spouse” means a lot of different things and encompasses a lot of situations – what does it mean to you?

IVAN PERRY: I got out of the Air Force in 2011, after my third deployment in Afghanistan. I was deployed with Air Force para-rescue with the Special Forces guys, and I was tired of getting shot at - so I thought I’d get shot at with verbal volleys instead, and got into talent acquisition! My wife went from active duty to reserves and now she’s a lieutenant colonel at the Pentagon. She’s Air Force as well – but she went to University of Virginia, not the Air Force Academy. So, she’s not as cool as me! [Laughs]

IVAN PERRY: She’s Director of Operations – that’s the number two in command in a squadron. She’s absolutely killing it! It’s funny, we’ll go to Washington Nationals’ games and people will thank me for my service and I’m like, “Thank her! She’s still in it!” Being a good military spouse.

ALEX HUNTER: I moved from North Carolina to California to be with my husband, so I had to adjust my career path there as well and adapt to that situation. And we actually got orders to go back to Virginia, so we are heading back in June. My husband was selected to go to “8th and I” [the nation’s oldest Marine Corps Barracks in Washington D.C.]  I’m very proud of him. He’ll be the one who marches in D.C. parades and also at ceremonies at Arlington Cemetery. 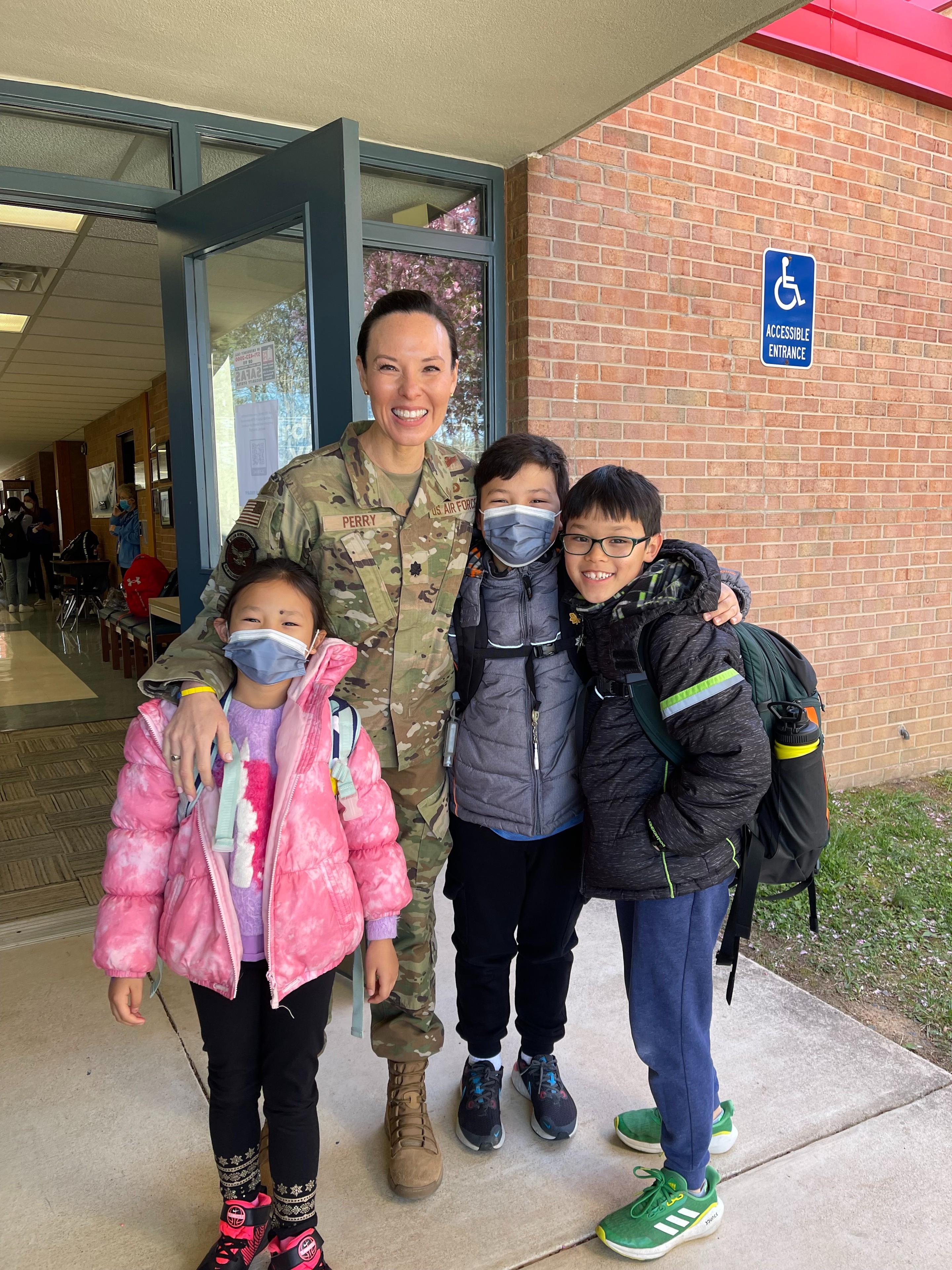 What are some of the challenges faced by military spouses?

ALEX HUNTER: I will say that [relocating] is hard. I loved my career, and I loved my job on the East Coast, but you have to look at each move as a new experience, a new opportunity to live in a different place where I never would have seen myself. And as horrible and horrendous as COVID has been, it has been a blessing in disguise, especially for military spouses. Now I’m able to be considered for remote work permanently for Blizzard and continue my same job, which never would have happened pre-Covid. It used to be that I would have to find a whole new job. It’s difficult but it makes you super adaptable and you get to do some really cool things. I’m a huge proponent for “everything happens for a reason” and I think coming to California and getting to work for Blizzard has completely catapulted my career in ways I couldn’t even imagine. I don't regret a thing, but there are growing pains for sure.

IVAN PERRY: Honestly, one of the reasons why I joined is that we’re a company that doesn’t just say they’re going to hire veterans without actually doing it. Being a Talent Acquisition Leader I literally just hired someone onto my team who is a veteran spouse.  There is such an untapped community of these highly qualified spouses that are in random, middle-of-nowhere places because that is where the base is. And like Alex said, because of COVID, it’s an untapped market. We can get highly qualified people, crazy motivated, that can do their job from anywhere. I’m a huge fan of hiring veteran spouses, and veterans from the Call of Duty Endowment program and I like that we’re deliberate about it.

ALEX HUNTER: Military spouses are among the most educated groups that are generally untapped.  A lot of military spouses continue their education – they get their Masters and their PHDs, because often there aren’t a lot of job opportunities, so they just decide, “Let’s go back to school”. Then these degrees and certificates are just sitting around waiting for opportunities. 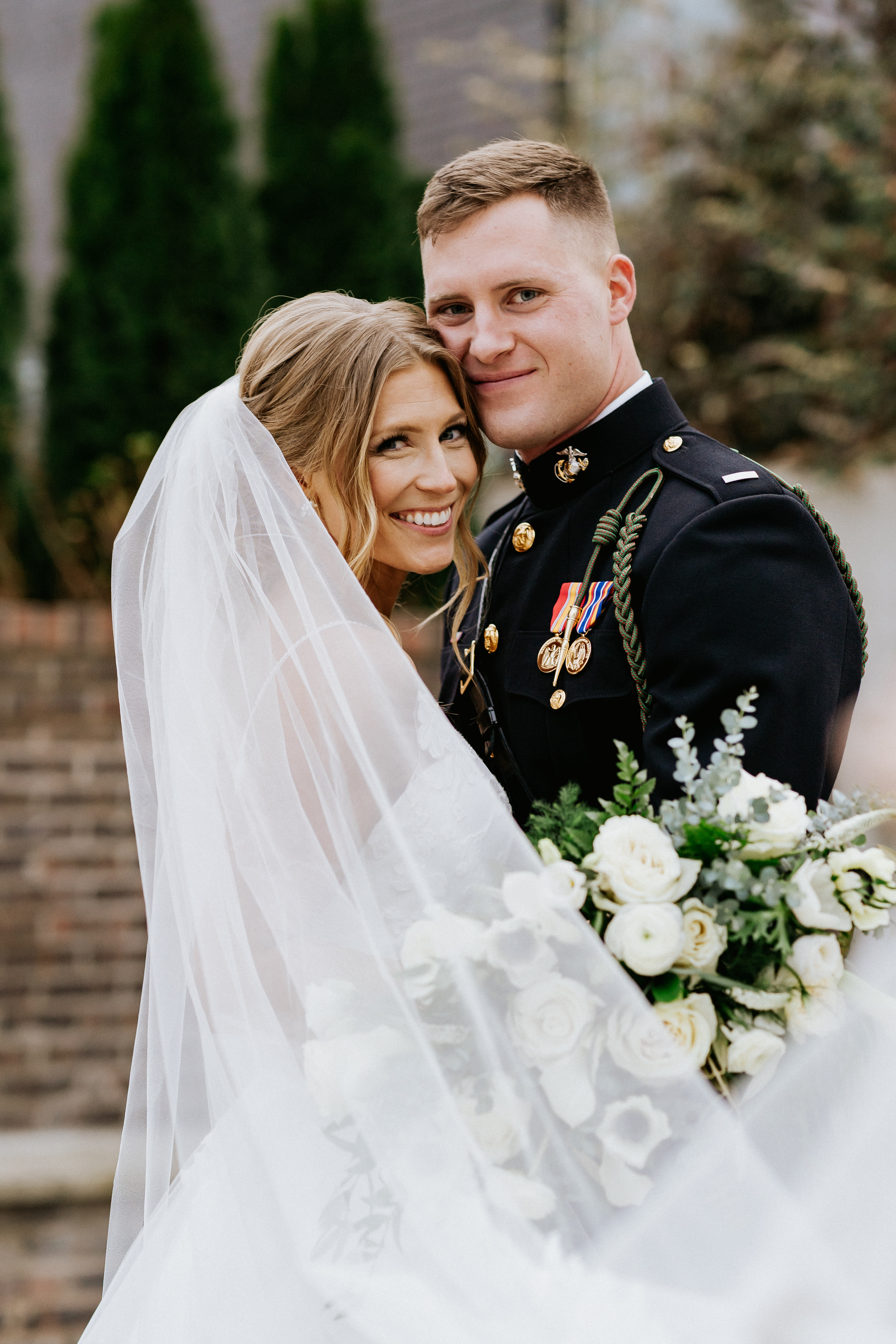 Because of Activision Blizzard’s commitment to veterans, have you noticed more support and resources available to you?

ALEX HUNTER: At first, for me, I was very desperate to have an identity outside of being a military spouse. That was really important to me. So, at first I didn’t really seek out any opportunities. But now that I’m established within the company, I recently joined the Activision Blizzard King Veterans network and I’m in the Military Spouse Slack Channel. I’ve definitely become more involved in the community. Someone in the group once said, “Yeah, you’ve got to claw your way back into whatever industry you want to be in whenever you move.” Just knowing that there are so many other spouses that go through that same thing is super comforting, as sometimes it can feel really isolating.

IVAN PERRY: You don’t have much of a life when you are at the Air Force academy, so [games] are fundamentally a part of the military culture. On my third deployment to Afghanistan, we found a way to hook up our Xboxes to the LAN and play Call of Duty literally every single night. That’s why I like the Call of Duty Endowment and we donate to it - I just love that we’re using this untapped network of military spouses. I’ve been able to connect to the military spouse network, and we all use that Slack channel to stay in touch. The group has mixers as well. As a Talent Acquisition leader, I’ve also pulled one of my team members, Mallory Gutowski, into a project to support Hire Our Heroes, a fellowship program at Activision Blizzard. Her husband is active-duty Army, so she has been able to work with this program that she's very passionate about. Community is such an important part of being a military spouse. Having a space to vent or to have people who relate to your needs is not typical. 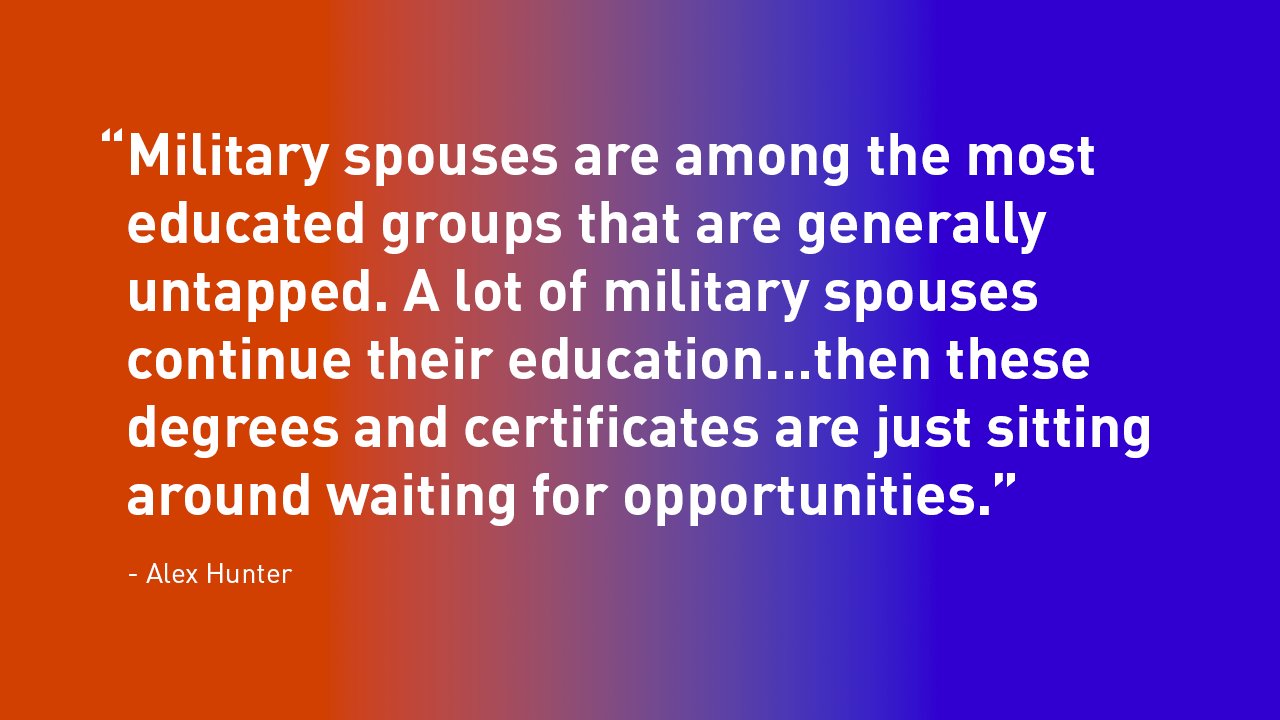 ALEX HUNTER: I agree. The community that Activision Blizzard has introduced me to has been amazing.  Other spouses know the difficulties of various moves across the country, how it feels when your spouse gets deployed across the world, and all of the other components – positive and negative - of being a military spouse. I don’t think I would be where I am without my community of other spouses who understand. And having found some of those spouses here at Activision Blizzard has made me feel incredibly supported personally and professionally. Like Ivan said, I think so many companies like to throw out, “Oh, we love our veterans” but Activision Blizzard backs up what they say. I truly think that they have respect for them. I think veterans and their spouses are sought out within this company.  I would truly say that they value veterans and their families.