Sledgehammer Games’ narrative design team saw Call of Duty: Vanguard as an opportunity to expand and deepen the scope of its immersive experience. Great games are, of course, fueled by great stories, and in this particular case, those stories were even more exceptional for being largely unsung.

Carleton, alongside Narrative Designer Alexa Ray Corriea and Associate Narrative Designer Belinda Garcia, mined incredible stories like those of Josephine Baker, an American jazz musician who used her sheet music to smuggle secrets to the French Resistance, or 21 year-old German student Sophie Scholl, who formed the underground anti-Nazi movement known as White Rose, or “The Lioness of Filipino Guerilla Agents” Magdalena Leones, who studied to be a nun before joining the resistance against Japan and earning herself the Silver Star from the U.S. Military.

The legacies of Baker, Scholl, and Leones are undeniable, but they are often lost in larger historical narratives. But Carleton, Corriea, and Garcia, are mining their stories – and the stories of countless women like them – to make the in-game battlefields more reflective of world history. 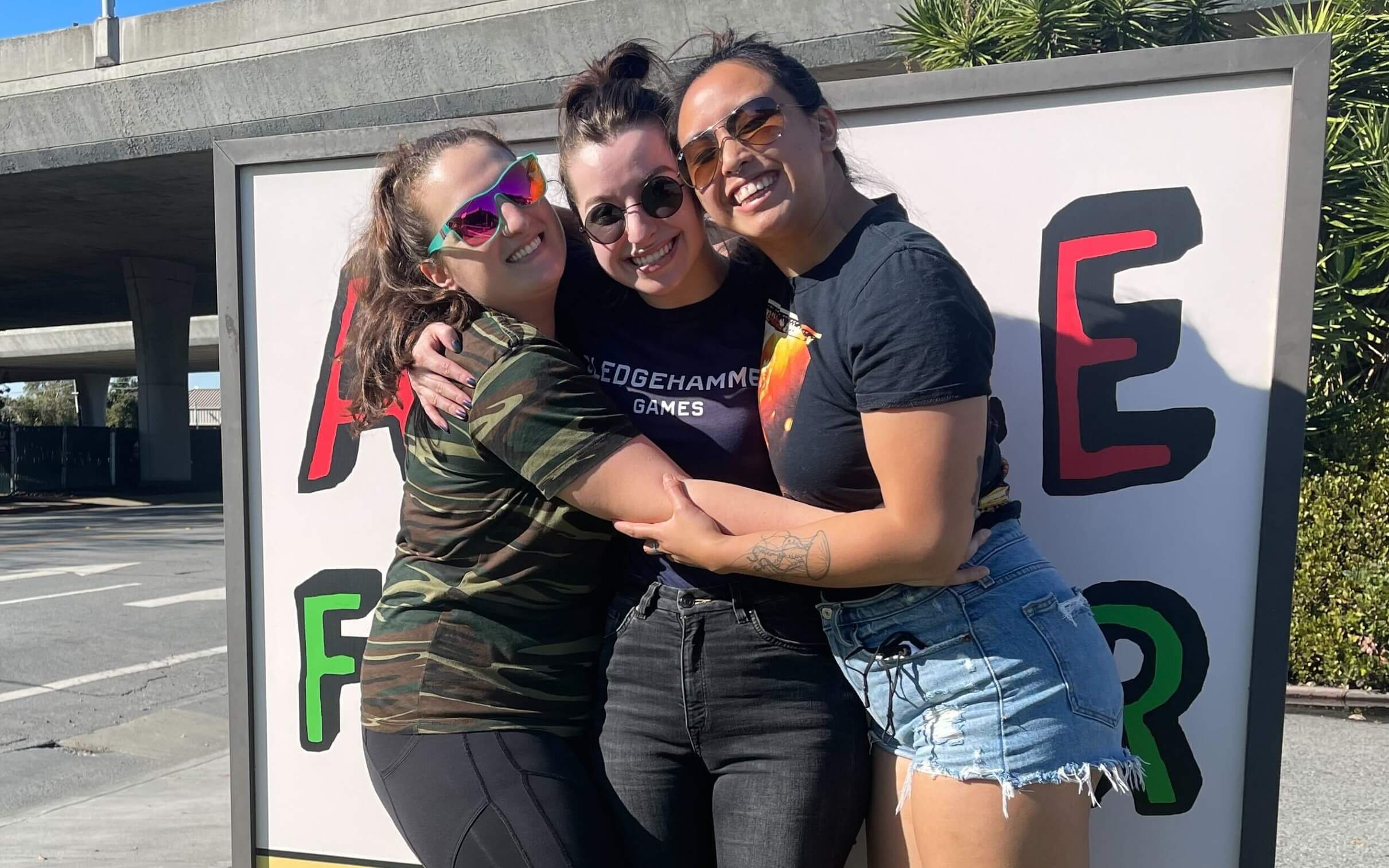 “This is what we’re hoping to do through these characters for Vanguard - educate people,” says Corriea. “There were a lot of women that contributed to the war effort, and there were a lot more countries and territories that participated beyond just the U.S. or Britain. We brought all these characters to life. They’re based on real people found through history, real stories, and real inspirations.”

In doing so, the team behind Call of Duty: Vanguard ensures that their character roster is richer and more diverse as history itself – while bringing their own unique points of view, personality quirks, and love of gaming to the fore in the process.

The team of writers understands that finding that balance between authenticity and fun is what their job is all about, and it’s a challenge they enthusiastically embrace. They purposefully helped put a roster together that would bring that sense of reality and historical weight, while still allowing for action and engaging gameplay.

“One character that comes to mind is Beatrice Mercier, who is French and was a schoolteacher before the war,” says Corriea. “Her cinematic is her pretending to be a little grandmother escorting people across the border in France. Someone grabs her, and she goes full-on Hulk and absolutely tears up this group of soldiers. We’re still giving you the Call of Duty badass fantasy, but women can be, have been, and always will be badasses as well.” Corriea notes that she, herself, enjoys powerlifting as a hobby and “is not what anyone would consider dainty and nice.”

During the process of expanding the Call of Duty: Vanguard roster, Corriea, Carleton, and Garcia, all found that they were able to tap into their own personalities traits and personal histories.

“Isabella Reyes is a Filipino operator that was in Season One,” says Garcia. “I’m Filipino, so it was such a joy to be able to work on her. I called my parents and was like, ‘Hey, what are some insults that you say?’ And I embedded them into character quips.” Knowing that she’d only have a short cinematic’s worth of time to get a character like Reyes’ backstory across, Garcia focused on a few key ideas. “When I thought about what I wanted from the cinematic I wanted to inject a little bit of her culture and a little bit of her backstory. So, the cinematic takes place in a church, and it opens with her praying. Being Catholic can be a huge part of being Filipino, and I wanted to include that. She fights some soldiers using Kali, these Filipino martial arts sticks – at the end, she walks up the altar and puts the sticks down in front of a photo of her father, who was killed in the war. That’s just one of the ways that we’re able to put in those little tidbits of our own experience, how we try and put that personality and they backstory in there.”

For Carleton, being given the opportunity to inject humor into a character – even if it’s gallows humor – was something she responded to immediately. “We have a character, Anna Drake, whose quips were really fun to write because we wanted to imbue her with a lot of personality,” says Carleton. “She doesn’t enjoy violence and she’s not a terribly happy person, but she’s strong and gets stuff done. And she has a sardonic sense of humor.” Carleton says the team gave Anna a nickname – “Combat Eeyore” – after Winnie the Pooh’s downbeat donkey friend.

The success of Call of Duty: Vanguard’s diverse roster is a testament to the environment in which they were created, something that all three women cite as vital to their work (and to their love of what they do). In fact, a lot of elements that have ended up in the games and have been embraced by the community is a direct result of a development process that is inclusive and supportive – allowing for them to “level up” in many different respects. 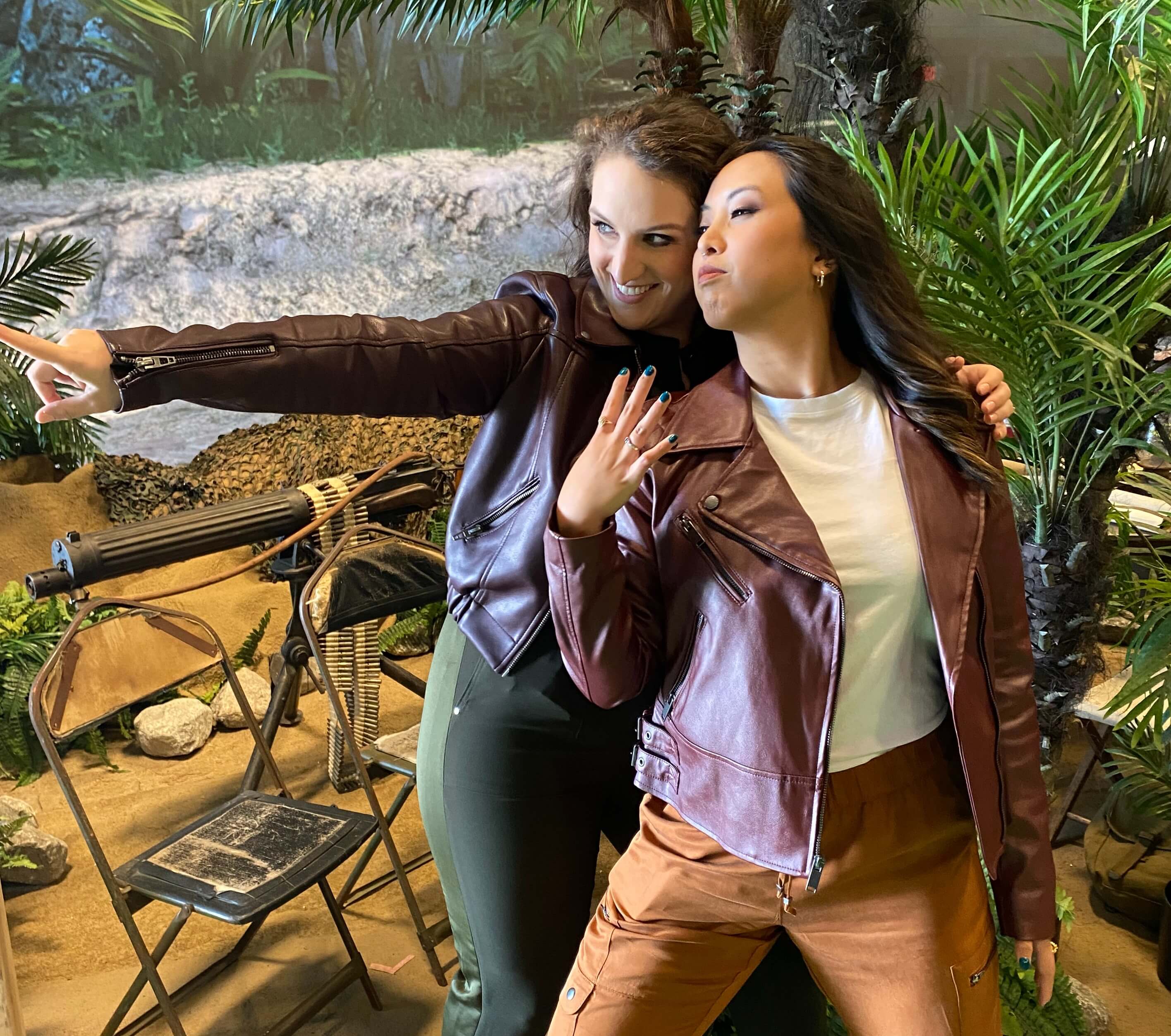 Corriea and Garcia, ready for battle

“With this genre and these types of games, it’s kind of easy to think of them as only stories told by men for men,” says Corriea. “But the industry is changing so much, and the player base is shifting so much, it’s important to reflect that shift everywhere.” She adds, “I wouldn’t have had the courage to speak up about the small changes we wanted to make in Vanguard if these women weren’t here. It’s important to have writing teams that are diverse, so that you have that support network. We’ve all been able to do better because of the makeup of our team.”

Carleton echoes Corriea’s sentiment when discussing her efforts to develop the character of Thomas Bolt. Carleton initially responded to his being Canadian – which happens to be her country of origin as well – but was able to push things in a slightly unexpected direction by exploring Bolt’s romantic side, through letters back home to his partner. “He has the optimism in him that he’s fighting for a better world, and a world that will one day accept him and his partner the way they deserve to be accepted,” says Carleton. “I think a lot of people can relate to that feeling of holding on and hoping for a better world, especially now.”

Garcia also sees the support structure as directly resulting in deeper, more engaging characters. “What helps is the diversity of the women on the team. Me, Shelby, and Alexa - we’re not all the same women. We have different interests, we have different motivations,” says Garica. “Because there is diversity among the women on the team, it naturally brings out the ability to write different women. Sometimes women are written to be just strong or just emotional, like they can only be one or the other. We all approach these characters like, ‘I’m strong and I‘m also emotional. I’m this multidimensional person in real life, ‘how do we bring that to our characters?’’”

With their efforts rewarded in the form of fan art of their female heroes and positive responses to the world they’ve helped build within Vanguard, Corriea, Carleton, and Garcia are driven to keep creating strong, dynamic, and relatable characters – be they female or male or non-binary – and keep evolving the in-game world to be full of rich, affecting details to enhance the white-knuckle action.

“We’re really proud of what we’ve been able to do,” says Garcia. “And knowing that there are people out there that have positive responses to our work, it makes us feel really good. It just reinforces why we love to do this.”