The creator of over a dozen World of Warcraft novels discusses her process, the changing landscape of gaming, and her upcoming novel all about Sylvanas Windrunner.

Sylvanas Windrunner goes by many names – “The Banshee Queen,” “The Dark Lady,” “Ranger-General,” “Queen of the Forsaken” – none of which indicate a particularly joyful life. She’s a character forged in battle, for whom not even death offers a break from torment and destruction.

And none of it could make Christie Golden happier.

Where Sylvanas’ lore is dark and sad, Golden’s own is one of infectious enthusiasm for what she does. As the author of over a dozen World of Warcraft novels (and nearly 60 bestselling books across iconic IPs including Star Wars, Star Trek, and Dungeons & Dragons), Golden has been breathing life into Azeroth and beyond since the game’s earliest days over 20 years ago. And for the past five years, she’s been embedded within Blizzard working to further deepen and expand the lore as a full time Senior Writer. When it comes to all things World of Warcraft, Golden feels “so lucky to have been able to leave a fingerprint or two on so many different aspects of the game.” 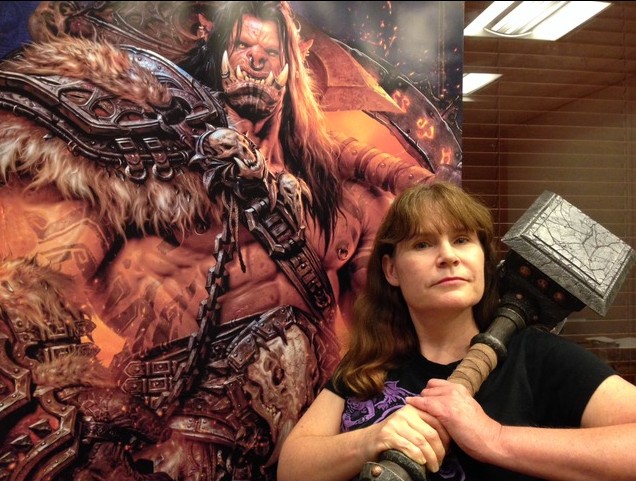 Those fingerprints have run the gamut from little details – Azeroth’s two moons? Those were Golden’s invention – to the responsibility of finally telling the full story of one of the game’s most prominent and dynamic characters in the upcoming novel World of Warcraft: Sylvanas due out later this month. She’s also watched an industry grow and evolve along the way.

“There’s so much enthusiasm and passion here [At Blizzard], and it’s very exciting to be in these story meetings because you’re working with people who are at the top of their game - no pun intended,” says Golden. “I always look back at these jam sessions with deep, deep fondness. I really felt like ‘Blizzfam’ even before I was formally involved.”

Golden’s journey has taken her from someone who never played video games to an integral part of the team making these worlds come alive. She overcame her initial hesitations about jumping into the gaming world because, in her words, “Like recognized like” – a storyteller found herself in a place that loves its stories.

“A friend of mine who had played the original Warcraft and Warcraft II RTS games- long before World of Warcraft, even before Warcraft III – said to me, ‘I think you should give [Blizzard] a shot. They’re a really good company, they care a lot about their lore’,” says Golden. Six weeks after her initial discussion with the Blizzard team, she had written Lord of the Clans, a novel that would set the groundwork for Warcraft III – and begin Golden’s run of adding to and expanding the lore in new and unexpected ways. “Fun fact – one of the first characters you meet in Chapter One [of Lord of the Clans] is Thrall’s mother. She had never been discussed in lore, so I was fortunate enough to be able to give her both her personality and her name: Draka. Now she actually appears in Shadowlands - it’s so cool, 20 years later, that the team’s decision to include her in Maldraxxus allowed me to come full circle on one of the first characters I ever wrote for Warcraft.”

Sylvanas stares down the Lich King’s army in the opening for World of Warcraft: Shadowlands.

The respect shown for the lore brought Golden into the fold, but what kept her going was the creative freedom she was given to play in the Warcraft sandbox, as well as the team’s inherent appreciation for the differences between a prose novel and a game. One was constantly moving and evolving, the other needed to have time and space to breathe. Golden talks effusively about how she was given room to flex her creative muscles and can now look back at just how significant those contributions – from big to minor – really are to the world within Warcraft.

“I didn’t think much of it at the time, but looking back I’m like, ‘Wow, the person who has written most of the Warcraft books is a woman, in an industry largely comprised of men,” says Golden. “But at the time, I didn’t realize how significant that was. It was just me doing a job that was something I loved, working with people I enjoyed working with.”

Sylvanas and the Future

Having been so much a part of the fabric of the world, it’s understandable that Golden feels deep connections to Warcraft and its characters. While she is briefed on the goals the team wants to achieve with the story and the types of characters they’d like to be involved, it’s up to her to find the soul that makes each individual character compelling (even if the soul ends up fracturing).

Golden explains that her process almost always starts from the same point. “I have two driving questions that always fuel my writing: What makes good people do bad things? And how is it that some people survive and get up and keep fighting while others don’t? Those have always intrigued me. And Sylvanas checked a lot of those boxes for me. It’s interesting to think about who you would be if your soul was ‘broken’? How much like you would you be? All of these things are really fertile ground for storytelling to explore.”

In the upcoming novel, Golden will finally dive into Sylvanas’ full story, from girlhood to the present (“I had the amazing opportunity to introduce her parents into the lore!”) fleshing out a character who has been on the forefront for some time now. “I try and bring humanity to every character. I like to say, ‘People are people, be they human or Orc.’ That understanding is important to me. And now we get to follow Sylvanas from childhood through her ordeal with Arthas to…well, I probably shouldn’t say!”

The Dark Lady, The Banshee Queen, the one and only Sylvanas Windrunner.

Suffice it to say, it’s an epic journey, filled with setbacks and adversity, but also small, important victories. Golden looks back at her own path and sees a similar trajectory, but one with (hopefully) more of a bright horizon than Sylvanas’

“In the five years since I joined Blizzard full time, I’ve seen a lot more women in our meetings, a lot more people of color,” says Golden. “We’re seeing more women players. Geeky stuff is now mainstream. It’s ‘Which game do you play? not ‘Do you play?’ now. And that’s wonderful. The world is changing, and we hope we continue to change with it.”