A Story in Every Skin: Celebrating Lunar New Year with Overwatch

One of the joys of the Lunar New Year celebration is the many forms those celebrations can take. It’s a cross-cultural event that draws inspiration from regional traditions across East and Southeast Asia – so how it’s celebrated in China isn’t necessarily the same as in Korea or Vietnam or Thailand. Even the date itself is fluid – it can fall any time between the end of January through early February. It’s both a deeply personal, family-oriented event and one that is also honored across professional sports and pop culture.

And, like gaming, it both celebrates our subtle differences and brings us all together. So, it stands to reason that the already diverse Overwatch family is all in on the Year of the Tiger.

To kick off the New Year on February 1, Blizzard in partnership with the Activision Blizzard Asian Pacific Islander (API) employee resource group, invited Overwatch Lead Concept Artist David Kang and Concept Artist Tim Guo to walk everyone through the depth and subtlety that went into colorful and dynamic new Legendary skins for Tracer, Mercy, Ashe, and others that have been available to players since the end of January, and will carry through the Lunar New Year celebration.

If you were unable to watch David and Tim’s presentation, here are some of the insights and revelations about what went into turning Overwatch into even more of a cross-cultural party.

China and Korea in Every Detail

Guo got the event started with arguably Overwatch’s most popular (or at least recognizable) character: Tracer. The new look is more than just a cosmetic change, rather it’s representative of the kind of meticulous planning and polish the team embodies to tie the characters to tradition without sacrificing the essence of each character.

Tracer’s Lunar New Year skin is based on the Chinese deity Nezha who, like Tracer, is known for speed and mischief and unpredictability despite ultimately being a force for good. Guo explained that Nezha is often represented as gender-fluid and has taken many forms in Chinese pop culture over the years (Guo referenced a 1979 animated film called Nezha Nao Hai, often translated as Nezha Conquers the Dragon King, that established a lot of Nezha’s look and feel for generations of Chinese children). Nezha travels at great speeds “Wind and Fire Wheels” (represented on Tracer as flaming “wheels” on her boots) and has a distinct bun hairstyle. The single lock of hair in Tracer’s face was a way for Guo, artist Emily Siu, and the rest of their team to acknowledge Nezha’s iconic hairstyle - typically with bangs in the front - while still allowing Tracer to maintain her own look (and her habit of blowing the hair out of her eyes). 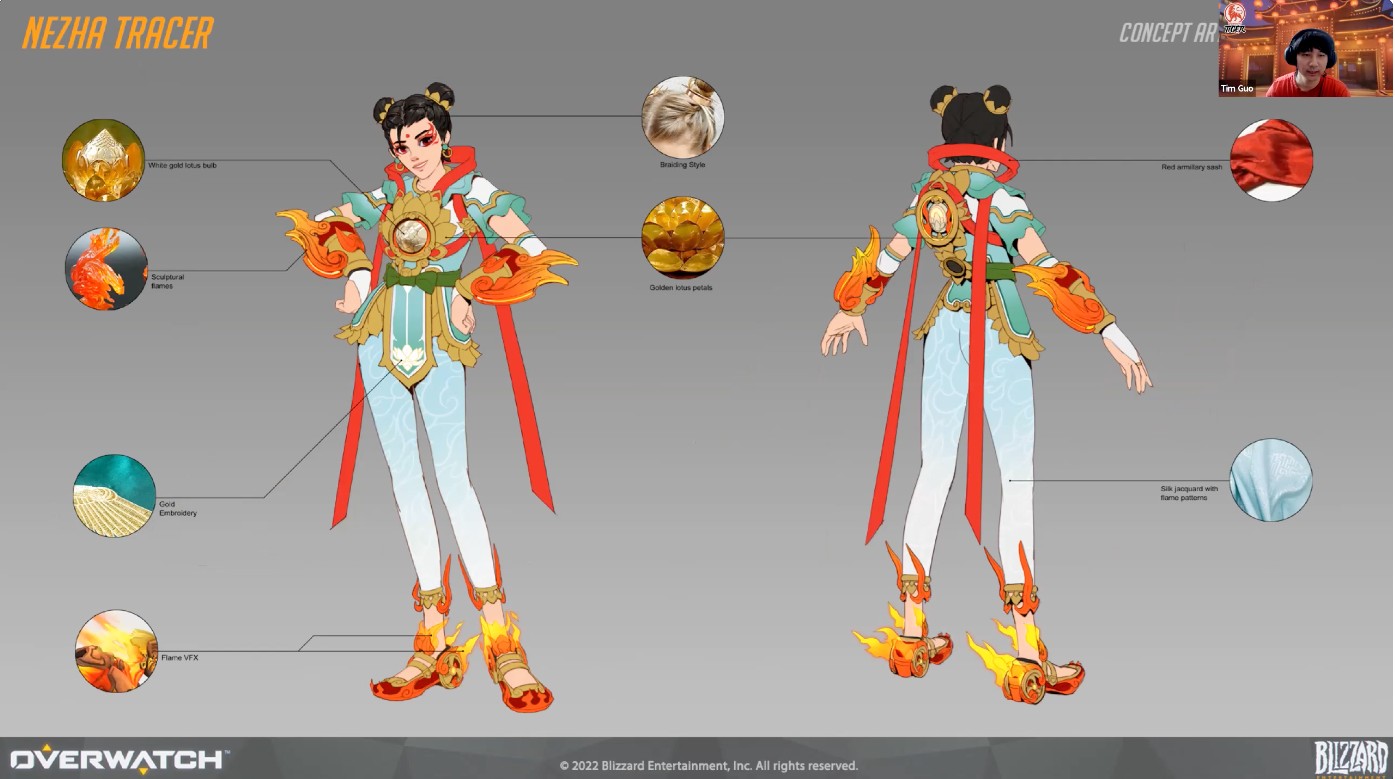 For Ashe (and Bob), Guo and the team mined an unexpected historical flashpoint in Chinese culture. In the 1920s, the Qipao – a form-fitting satin dress – became popular and represented a period of modernization and change for Chinese women. It has since become an iconic look, and the Siu tailored its texture and design to fit Ashe’s trenchcoat and “Old West” motif. Both Ashe and Bob are replete with red and gold, which represent good luck, as well as various symbols modeled on old Chinese copper coins, words, and symbols for prosperity and luck. 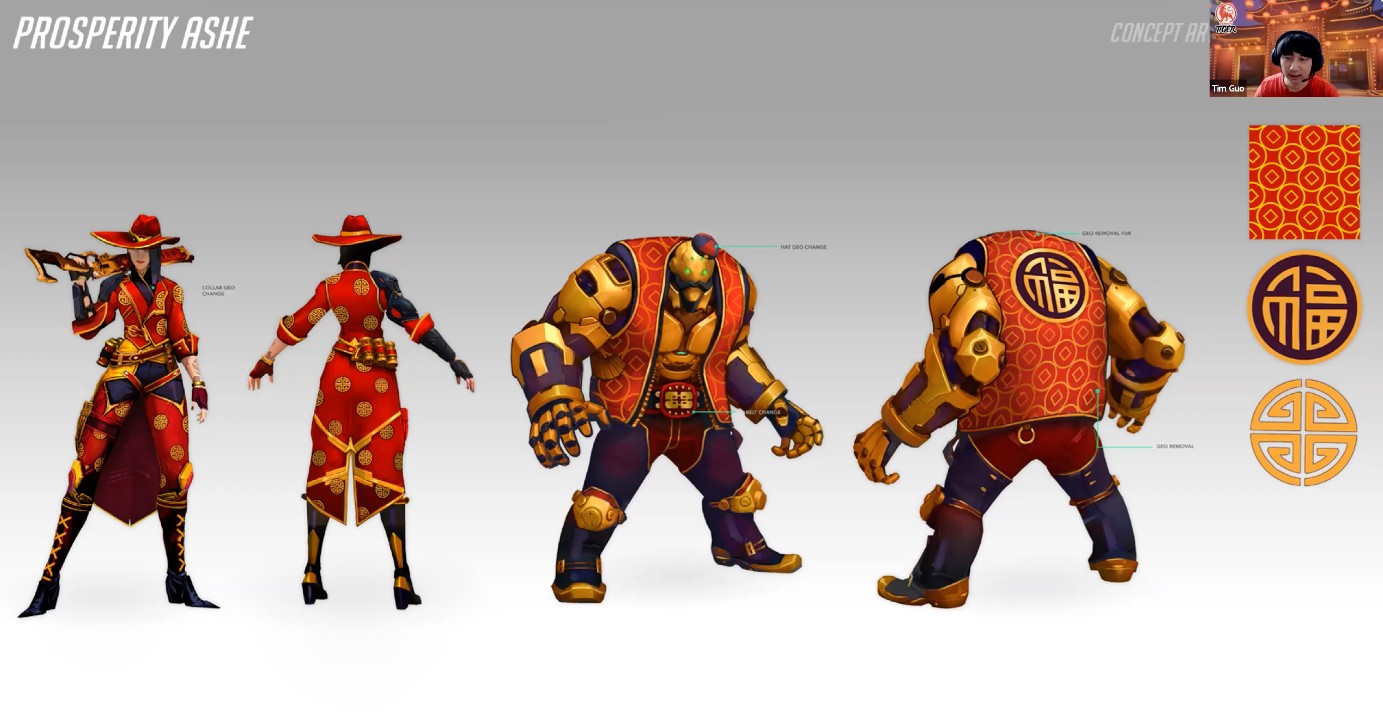 For Solider 76, Guo explained that the male version of the Qipao, called the Cheongsam, was not only popular but at one time mandatory. So, in a sense…it was a uniform. Remixing Soldier 76’s red-white-and-blue military theme into a stylish Cheongsam just made cultural as well as character sense. 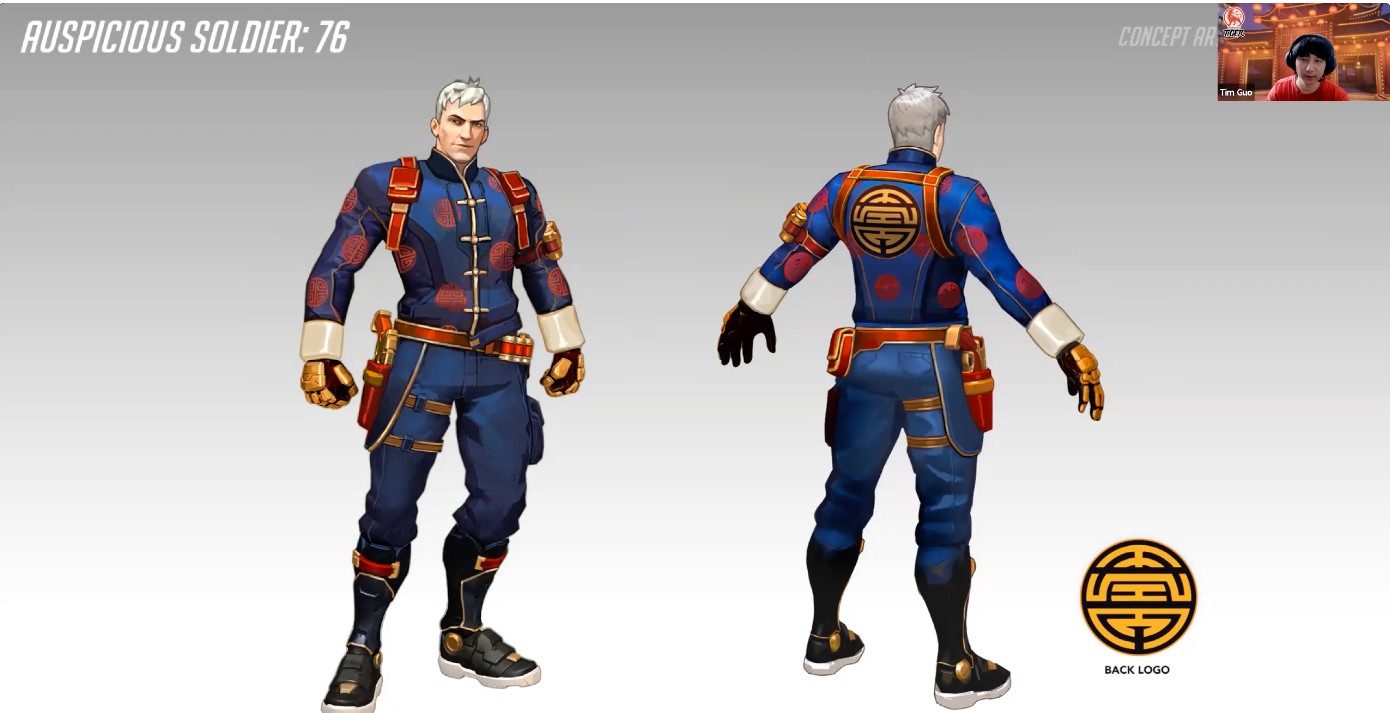 Finally, Guo introduced Wrecking Ball, whose new look consisted of taking the character’s M.O. – namely, being a giant hamster ball of destruction – and mixing it with its most unlikely opposite: intricate and delicate Chinese porcelain. Of course, Siu wasn’t just going to use any porcelain template – she reached back to the 17th century Qing dynasty to pay homage to one of the most influential cultural and historical artifacts of that period, and its instantly recognizable blue and white pattern design. Inside this porcelain tea pot, Hammond (who is also decked out in “good luck” red) wears a tea bag on his back – which Guo explained pays tribute to tea ceremonies that are a key part of Lunar New Year celebrations in China. 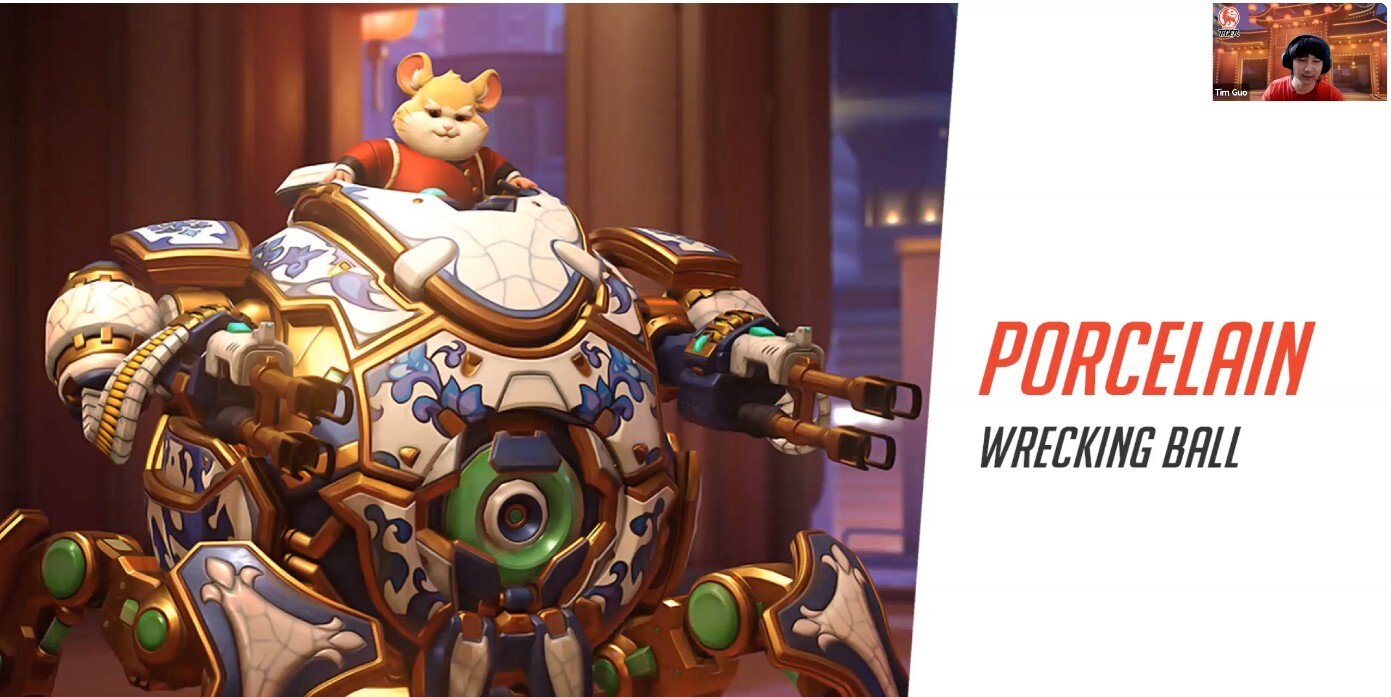 From here, Kang introduced a Legendary skin for Mercy based on the traditional Seolbim clothing from Korea. As Kang explained, the term refers specifically to new clothing worn for the new year – so it fit perfectly into the celebration and overall theme of the launch. 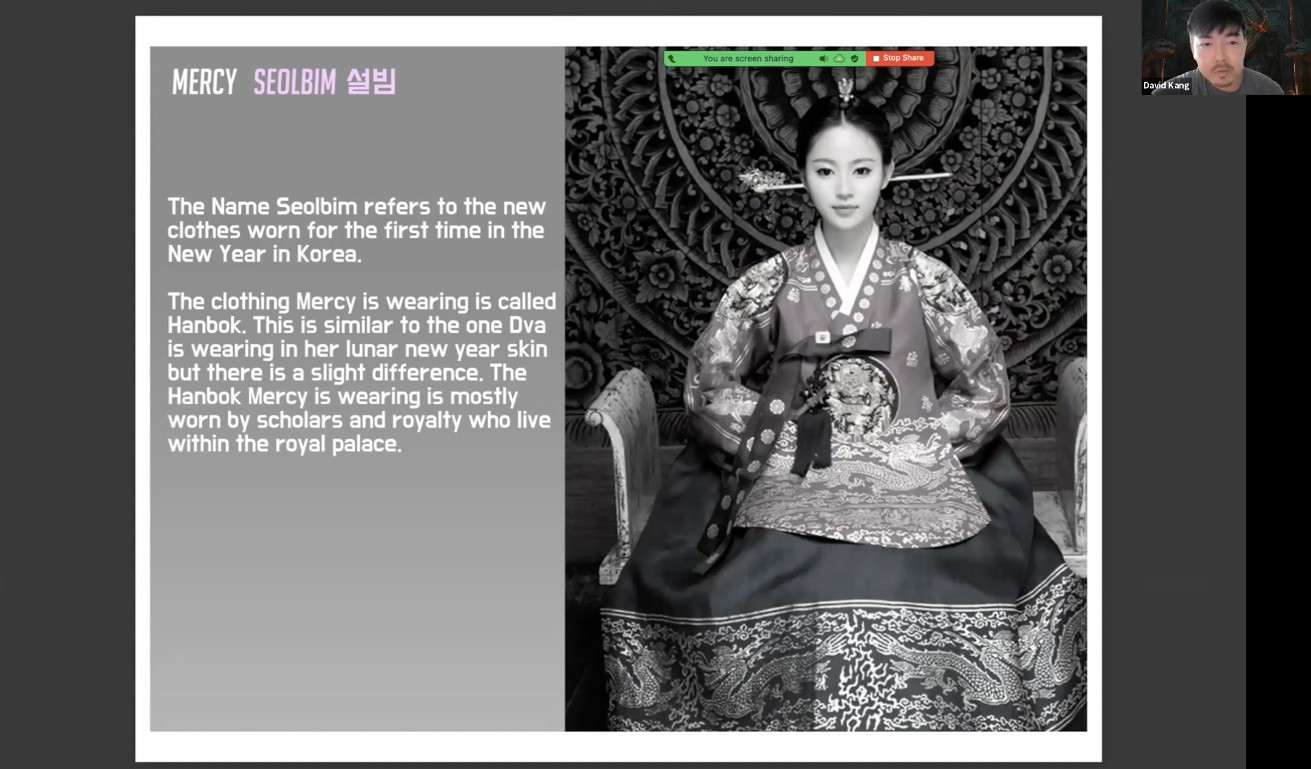 As a Korean-American, Kang paid extra care in the design of Mercy’s look so that it fit with the character’s aesthetic while also accurately representing Seolbim clothing, jewelry, and hairstyles. He and his team worked closely with Blizzard Korea to ensure that this delicate balance was maintained. 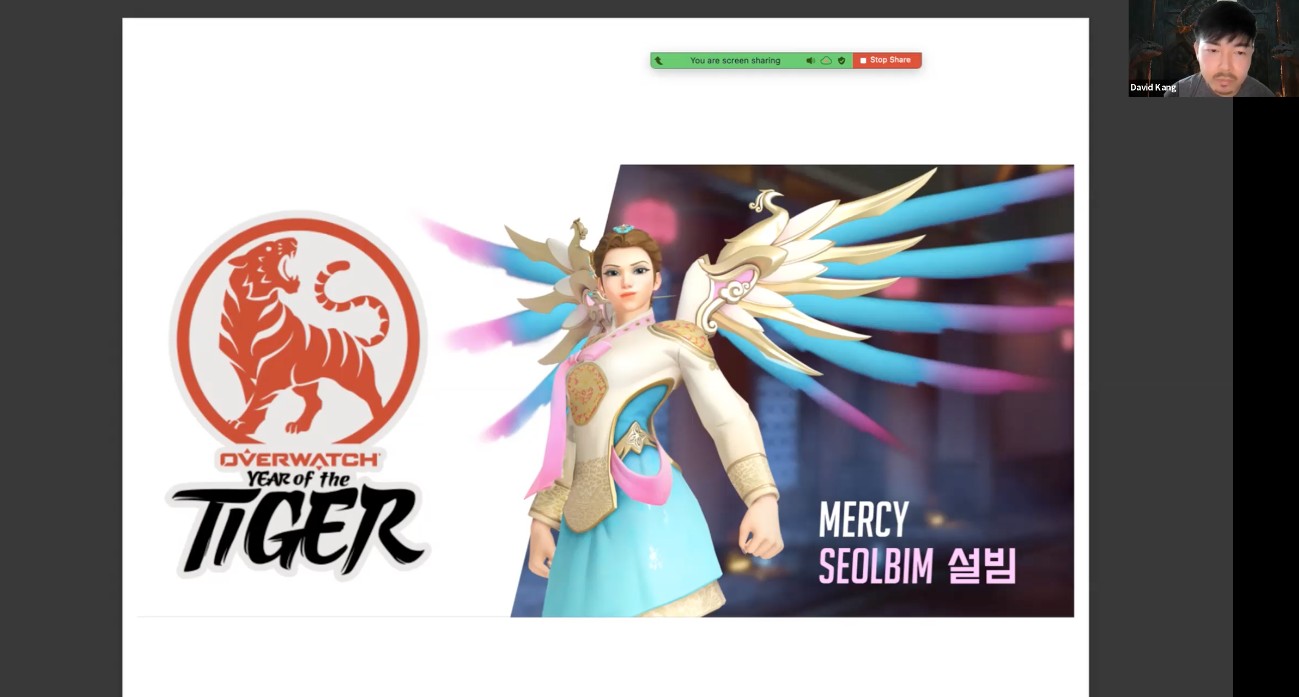 Overwatch is already a diverse game, with a mix of characters from Asia, Africa, North America, Europe, and Australia. It’s a fertile ground for this kind of cross-cultural celebration, and both Guo and Kang were challenged by the task of appealing to regional Chinese and Korean gamers and Korean-American and Chinese-American gamers - all the while staying true to the heart of each Overwatch character.  Simple elements like color scheme could have broad impact. Kang recounted how a darker-hued Mercy appealed to Korean-American gamers, but the lighter, more pastel colors were embraced by Korean natives. It was a juggling act, but one they and their team embraced completely.

At the close, Kang revealed that the process of bringing Lunar New Year celebrations into Overwatch had another unexpected, but no less important, reward.

A newly hired designer, Chonlawat “Takki” Thammawan, put together an enormous PowerPoint presentation for the team showing all the ways Thai traditions and design could be implemented into future Overwatch games. It was a brand-new door opening before their eyes, and one that Kang, Guo, and his team want to not only keep open, but use as a catalyst to open even more.  Kang closed out the presentation with a vow to bring more cultures into the mix for future celebrations and events.

A prosperous year is already underway, and the future looks even brighter. Don’t put those red and gold outfits away just yet.